How would you increase voltage to drive an LED yet also keep it limited?

I have somewhat of a special situation. I have a telephone system at the performing arts center I work at, and I need to make some of the phones flash an LED with no audible ring. My predecessor came up with a way and did this on two of the phones, but it has a bit of a flaw that I am attempting to solve. Just as a quick background, we have an Avaya Partner phone system, and the phones that have/are to be modified are system phones with speakerphone in them. These phones ring through the speaker. On the phones my predecessor modified, he installed a SPDT switch on the positive lead for the speaker, so that when the switch was "off" an LED would flash and the ring wouldn't sound, when the switch was "on" the ring would sound but the LED would not come on. This setup is perfectly fine, except for one issue: the ring volume must be turned all the way up in order for the LED to flash. This creates a big issue in that if someone turns the switch on for either the ringer or speakerphone and forgets to turn it off, the ringing telephone creates a big disruption during the performance taking place. The ring volume on these system phones is digitally controlled in about 14 steps, and the LED will only start to flash dimly around the 10th step, and finally bright at the 14th. I bought various LEDs to see what would work best, and found two that would light bright enough, first one being FW supply 2.4v (max) FW current 20mA and the second FW supply 1.8 typ 2.4 max FW current 20mA. Both of these still require the ring volume being turned up as much as I previously stated.

What I am trying to figure out if its possible to do is to be able to increase the voltage to drive the LED with the ring volume at the lowest level. I also assume that if the voltage was increased to drive the LED, I would also somehow have to limit it to protect the LED from burning out in case someone turned the ringer up all the way. The only markings on the speaker are 24ohms 0.2w.

-Is there a way to make the LED work as I described?

-Is there a better way/different place to hook in the LEDs so that they will flash when the phone rings and just install a switch to turn off the speaker?

-Do I need to find a power supply on the board in the phone and tap into that to drive the LEDs instead? The phone system supplies 48vdc on pins 3 and 4 to power the system phones (was reading 45vdc with the system phone connected).

I spent hours searching around to find a way to do this but I had very little luck and most of what I found were phone flashers that were external and would need either a battery or power supply to operate, and I wasn't sure if our phone system would put out the necessary AC and Hz to make them work correctly. I also didn't want to risk burning out an extension on our phone system since some said there was a possibility of damage to the system. I would like to keep any necessary circuitry contained to the phone if possible.

I am still a bit of a beginner with this so any advice and thoughts would be greatly appreciated!

Look at Respawned Fluff's comment. He's right on. You could use an Op Amp as a comparator and when the voltage level is exceeded, the output of the Op Amp can drive the LED. You could then control the voltage level with a pot. You should, however probably include a small buck converter to step the voltage down form 48v to like 5v or 3.3v to run your circuit off of. With that said, there is probably a power rail somewhere on the phone's pcb that has somewhere around 5v or 3.3v on it to run things like the microcontroller. You could probably tap off of that since you'll only be drawing a few mA. Finally, if you do you an op amp, it's inputs are usually high impedance meaning you will draw very, very little current from that speaker output.

Maybe something like this: (Please correct me if I'm wrong here) 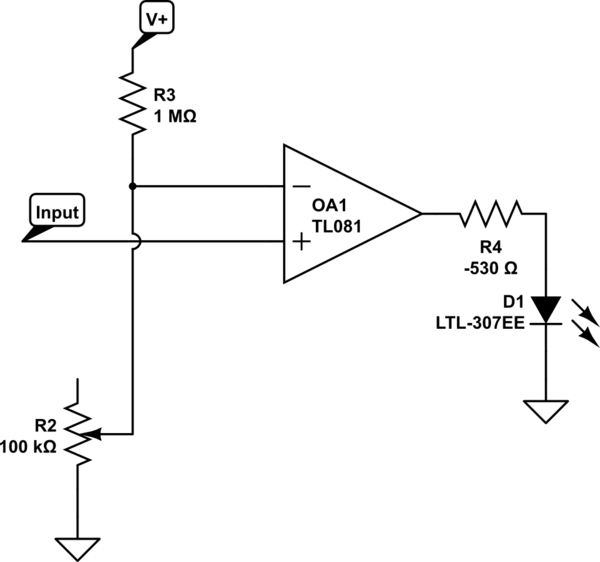 Not the answer you're looking for? Browse other questions tagged led telephone or ask your own question.