Keeping a consistent supply voltage while driving a solenoid from battery

I am working on a project where I would like to pulse a solenoid using an arduino with the power from both coming from 4xAA batteries.

The project is a puzzle, when you solve the puzzle, the solenoid momentarily engages to open a latch.

The puzzle side of the circuit is pretty simple, an arduino pro mini with various LED's, switches, a buzzer and shift registers.

The solenoid is controlled using an N-channel MOSFET connected to one of the arduino outputs. The entire circuit is powered by a 4xAA nimh battery pack, to power the solenoid I am using an XL6009 based step up booster obtained from ebay, it's set to about 15V at the moment, there are 2 2200uF on the output of the step up to try and supply the solenoid when it is triggered.

Everything is working well except for one part, when the puzzle is solved and the solenoid is triggered, there is just a very small movement from the solenoid, and the LED on the arduino board goes faint.

I suspect that the step up booster is pulling too much power after the solenoid is triggered and causing a voltage drop from the battery and causing the arduino to malfunction.

I tested this theory by disconnecting the input of the step up after charging the capacitors and it all worked as expected.

So my questions are: Is it likely my theory is correct? If yes, is there some way I can protect the arduino from this momentary load? I thought the capacitors would have done this.

Or am I just dreaming that I can run this circuit from 4xAA's?

Here is the solenoid part of the circuit: 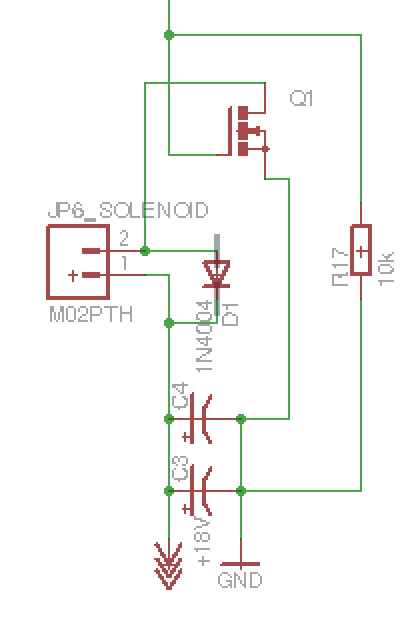 First part of your question can be answered experimentally. Charge those capacitors to 15V, disconnect them from the 15V source, and apply them to the solenoid. If the solenoid operates acceptably then the capacitors have enough capacitance and you're good to go from that perspective. Otherwise you'll need more capacitance (or more voltage!).

Secondly, you may need some way to isolate the drain of the solenoid from the boost regulator output to prevent it from dragging down the input voltage. The easiest way to do that is to use a resistor that is high enough value to prevent overloading the source and low enough to allow the capacitors to charge in a reasonable length of time. Suppose you allow a 25mA charge current, which might be 75mA at the batteries. That would be a 600 ohm resistor, so let's try 680 as a standard value. Power dissipation should not be much but if you use a 1/2W resistor it can't get too hot even if you leave it on.

Not the answer you're looking for? Browse other questions tagged arduino batteries solenoid or ask your own question.

5
Considerations for powering solenoid and arduino from the same power supply
0
Linear regulated supply from noisy input voltage
0
Circuit design and power management in an Arduino project with stepper motors and solonoids
0
Door lock solenoid with finger print & Arduino Nano
0
PWM that can handle rapid on and off cycles?
1
MOSFET for PWM control on a solenoid
1
How to trigger 50v solenoid with 120v AC
5
How does my breadboard circuit diagram look? Is my circuit going to explode?