I got a really helpful answer from gsills to a prior question I asked on that topic; now I'm just trying to follow along step-by-step to be able to derive the results for myself, so I can apply the same reasoning to other possible pass devices. Also, it's a good opportunity for me to solidify my understanding of BJT small signal analysis.

The place I'm having trouble is in deriving the transfer function for the common-emitter (CE) small signal model to determine the location of the pole due to the transition frequency (\$f_T\$) of the pass device. From gsills' answer:

What about the poles? First let's look at the pole caused by \$\beta\$ rolloff to \$f_T\$. In the model, eliminate all the capacitors and write the transfer function. It's kind of big, but there is just one pole, which after solving for the root gives the pole frequency for \$\beta\$ rolloff.

Here's a redrawn small-signal model with all the capacitors removed (also I changed \$R_4\$ to the perhaps more conventional \$R_s\$: 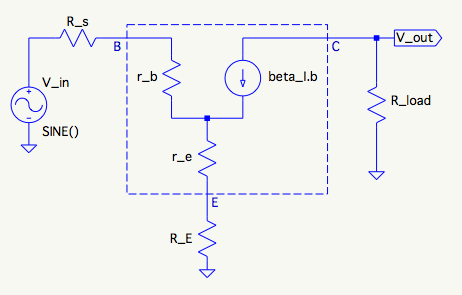 I guess where I'm struggling is there are no capacitors to bring in a \$1/sC\$ element, so I don't see how to end up with something where frequency is a factor. I'm kind if imagining there's some sort of \$\beta(s)\$ expression that gets substituted, but I can't really discern an approach that seems like it will get me there. I do note that \$f_{p\beta}\$ is proportional to \$f_T/\beta\$, the best case beta rolloff pole, and also that the rest of the numerator exactly matches the denominator of the DC gain of the model. But that's all I've got.

How can I get from here to an \$f_{p\beta}\$ expression like the one gsills provided?

In the development of the linked previous question, that's already rolled into the equations.

Collector voltage for the circuit is:

This includes both the gain term \$A_o\$ and \$\beta\$ pole frequency term. Of course, after dividing by \$V_{\text{in}}\$, the transfer function remains. I think I left that step out earlier, but it's all nodal analysis and algebra.

I seem to have the opposite view of simulation than Andy. Getting simulation results from SPICE or any other numerical simulator can lead to too easy acceptance of results and models. An answer is gotten, but causes and fundamentals of behavior can be obscured. It's too easy to think something is known when it is not. Trends are hard to spot.

Using a simple analytical model makes it more clear where the model is worthwhile and where it's not. With the analytical model you can look at how the parameters interact. Add parameters one a time, see how orthogonal they are. Find out what dominates in which regions of interest. It's an effective way to learn fundamentals and how to design. It's really hard to do this with a numerical model like SPICE.

Still, SPICE can be a useful tool. Someone using it should get to really understand it though. Here's a guideline for SPICE use:

Not the answer you're looking for? Browse other questions tagged amplifier circuit-analysis bjt transfer-function cutoff-frequency or ask your own question.

5
Designing yet another BJT amplifier given some constraints
6
How much can BJT parameters (particularly beta) vary for Monte Carlo analysis
1
Effect of emitter capacitor in common-emitter amplifier
0
How can I calculate transfer function of Boost converter considering all resistances?
2
Input resistance confusion
0
Help deriving the transfer function of an LC circuit?
1
Biasing of CE amplifier with emitter resistor for specific gain
0
Why is my zero and pole frequency of this transfer function wrong?