I am reading this article from Maxim on mixed-signal circuits grounding: https://www.maximintegrated.com/en/app-notes/index.mvp/id/5450

Everything makes sense to me until I read the "Grounding Challenge of Multiple Mixed-Signal ICs". It shows the following diagram to indicate that the cut plane technique does not suit for the multiple mixed-signal ICs.

They think splitting ground plane into analog plane and digital plane is bad for multiple mixed-signal ICs. The reason they gave is: there is no single point ground any more.

Why is single point ground important in this case?

The reason is quite simply that we are trying to make a 'moat' with a single bridge across it. With two cuts in the plane, the analogue returns currents from each device can get mixed together, introducing noise from one set of ADC inputs to the other. In addition, we have provided a circular route for the digital returns to go around the analogue side of the ADCs.

I have actually had to fix a board that did precisely this, and the faults were subtle and induced a great deal of hair pulling.

To avoid the issue, do the following (works for relatively slow analogue, fast analogue have different segregation requirements - Note 2):

Note 1. This is primarily due to the limitations of layout tools. If I could make the tool attach a via to only specific layers, I would, but this is very difficult with most existing toolsets.

Note 2. Use a separate moated area (each with its own local ground and ferrite / regulator) for each section with high speed analogue signals. See this excellent guide for some more details.

The two cuts in the plane can produce a slot antenna, where a great deal of the digital noise can accumulate, depending on the frequency content and the aperture sizes and distances.

This shows one possible way this can cause trouble... 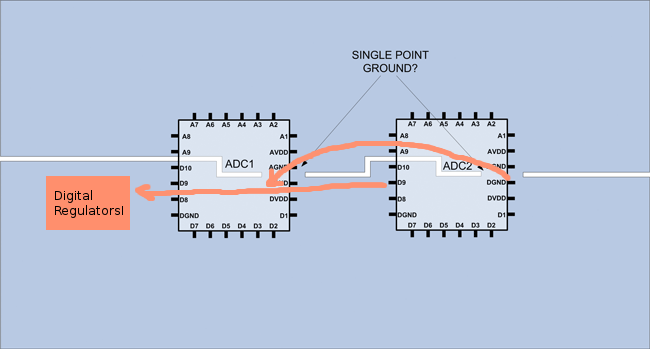 Here most of the digital return current goes on the digital side, but some of it can go around through the analog side as show in the top arrow; especially at low frequencies.

If the regulators are placed such that straight line from them to the ADCs doesn't cross anything, then it likely wouldn't matter whether there is a cut in the plane or not.

A single point ground prevents digital currents produced by an ADC chips getting onto analogue ground and creating noise that may disrupt an analogue signal chain.

If you have 2 ADCs (or more) then there is a concern that a digital current can flow thru the analogue part of the ground plane and back round to the digital plane via the other "single point connection". Some folk will use ferrite beads in series with the multiple single-point connections but, I don't think it is necessary. When you have earth planes (digital or not), return currents tend to flow in the part of the earth plane that is directly below the power plane (or track) so, providing the digital power plane (or track) doesn't extend across into the analogue section of the board then digital return currents won't even if you have multiple connections.

So, my advice is avoid power supply lines entering the analogue part of the circuit board or else make those lines clean with ferrite beads/filters to prevent digital "hot" currents flowing through any power connections that might be routed into the analogue section.

The truth is it depends on the frequencies you care about.

For low frequency systems and especially systems requiring precision DC performance "shared impedance" is the main enemy. So you want the analog and digital grounds to meet at a single point with mixed signal devices being located as close to that point as possible.

For high frequency systems on the other hand return currents will naturally follow the outgoing currents. The main enemy is anything that prevents that happening, so any signal passing (explicitly on a track or implicitly inside a chip) over a slot is bad as it will cause both magnetic emissions and difficult to predict return paths. If you don't care about precision DC then a solid ground plane is often the best bet.

If you need both then you want a single point for DC grounds but then bypass capacitors between the analog and digital ground planes to allow a direct return path for high frequency signals.

I also echo the comment from another answerer that appnotes are often full of rubbish.

Not the answer you're looking for? Browse other questions tagged adc pcb-design ground grounding groundloops or ask your own question.

1
How to create a mixed signal pcb

22
When to use ground plane cutouts?
14
Should the unused areas on the top layer of my RF PCB have ground pours?
6
How on earth shall I design the ground planes for mixed signal circuits, split or not?
1
Where do the return currents go for a MCU with multiple Vdd and grounds?
2
Advice for Grounding and Shield Placement
0
How do I integrate multiple IC circuits for audio?
1
How to create a mixed signal pcb
2
Grounding and Signal Integrity of my PCB Layout (ADC, SMPS, SD card, USB)
3
Adding SMA conectors to a device whose metal casing is connected to earth ground through at a single point