How do diodes work in an AM band application?

I have been trying to build an AM radio for a while now and with continued failure, I am trying different avenues.

I understand that Germanium diodes have a forward drop of about 0.3V; to be sure, I put the diode in series with a resistor to measure the diodes forward drop.

What I don't understand is how so many "How to build an AM Radio" articles take the signal directly from the antenna and pass it through the diode. I have used a large monopole antenna (about 20 feet) connected to a tuner circuit (200-1800uH inductor and 10-360 pF cap) and I do not get anywhere near 0.3V.

So, I would like to know, how do diodes work in an AM Radio? There must be something that I am not understanding or doing properly because I have not yet been able to receive and demodulate a signal in my attempts.

The detector you show is called an Envelope Detector (Wikipedia).

You are missing a couple of important components: A resistor and a capacitor after the diode.

When the diode conducts it charges up the capacitor which then discharges relatively slowly through the resistor. The time constant is selected to be long relative to the carrier frequency but short relative to the modulating signal. 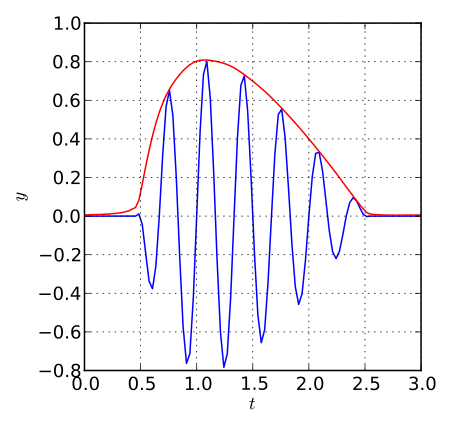 The resistor and capacitor fill in the signal between the carrier cycles to get back a close approximation to the original sent signal. 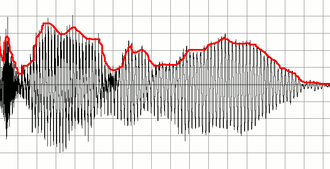 The rapidly changing signal is the carrier while the red outline is the wanted output.

For a simple receiver such as you show you need to be careful that the connection of the antenna and the detector do not disturb the LC resonant circuit so much that it changes the frequency of resonance from where you need it and may also increases the losses to stop it working.

Typically the antenna will be connected to the coil with a small capacitor to reduce such loading and the detector will be taken from a tapping on the coil, not at the end for a similar reason. This will allow the resonant circuit to operate more effectively.

You need what is called a "High Q" in the resonant circuit to help magnify the small signal from the antenna.

Such as in this example: 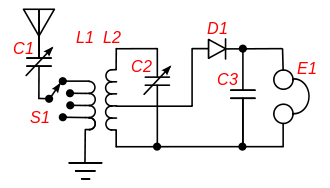 The diode will actually start conducting at lower than 300mV, probably around 100mV as shown in this chart you get some output evener a few 10's of millivolts of signal. 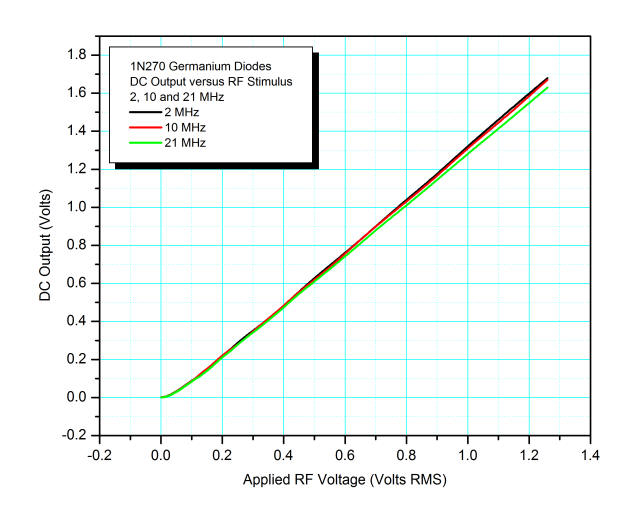 Even with all this the output signal will be small and you will need sensitive high-impedance headphones - normal low impedance headphones for personal stereos will not work, I have used a crystal earpiece and they work satisfactorily although that was many years ago. You can also feed the signal to an audio amplifier.

There are a number of web sites about crystal radios that can give information to help get yours working - here is one Techlib.com.

That's not a very good crystal radio. Try as long a wire as you can find and the strongest AM station in your area. You might be able to get more than the 300 mV it takes to turn on the diode. By the way, nowadays you use a Schottky diode instead of a germanium one. They have about the same forward drop, but are a lot easier to find.

Better crystal radios have two coils that form a transformer. The primary is the smaller coil, which is driven from antenna to ground. The larger coil is the secondary, which is used as you show, except that the antenna is not directly connected to it.

I go into more detail on crystal radios here: https://electronics.stackexchange.com/a/150307/4512. Search for "crystal radio" here and you will find a number of posts with more information.

Not the answer you're looking for? Browse other questions tagged rf diodes am demodulation or ask your own question.

1
Making an AM radio with a silicon diode
0
Choosing Diodes for 3-Phase Rectifier
2
Lower than 0.7-0.6V voltage drop on sillicon diodes
0
Simple AM receiver schematic?
0
Puzzled with parallel forward biased diodes with common anode and different cathode voltages
0
How to turn on LED using RF as a catalyst?
0
Adding Parallel Diodes to a load
1
Why 2 diodes in parallel buck converter design?
1
How to add a simple ESD protection to RDA5807M FM tuner antenna pin?
1
Understanding how One-BJT CW transceivers work