This is a follow-up to this question I asked years ago.

I'm using a head pointer (see my linked question for a photo) with a tip made of plastic, thus non-conductive. The shaft is metal, and conducts well enough for a smartphone touchscreen. My goal was/is to make the tip effectively conductive so I can operate devices with capacitive touchscreens

As my initial attempt I chose something as non-invasive as possible (as opposed to crafting a new tip) and decided to draw conductive traces on the existing tip. I chose this CircuitWriter pen to draw several traces connecting the very tip (i.e. the surface that comes in contact with the keys/the touchscreen) and the metal shaft of the head pointer, hoping the resulting path(s) would be conductive enough be registered by touchscreen. Well, disappointingly, it was not the case. As to why that is, I am lost.

Here is a picture of the result: 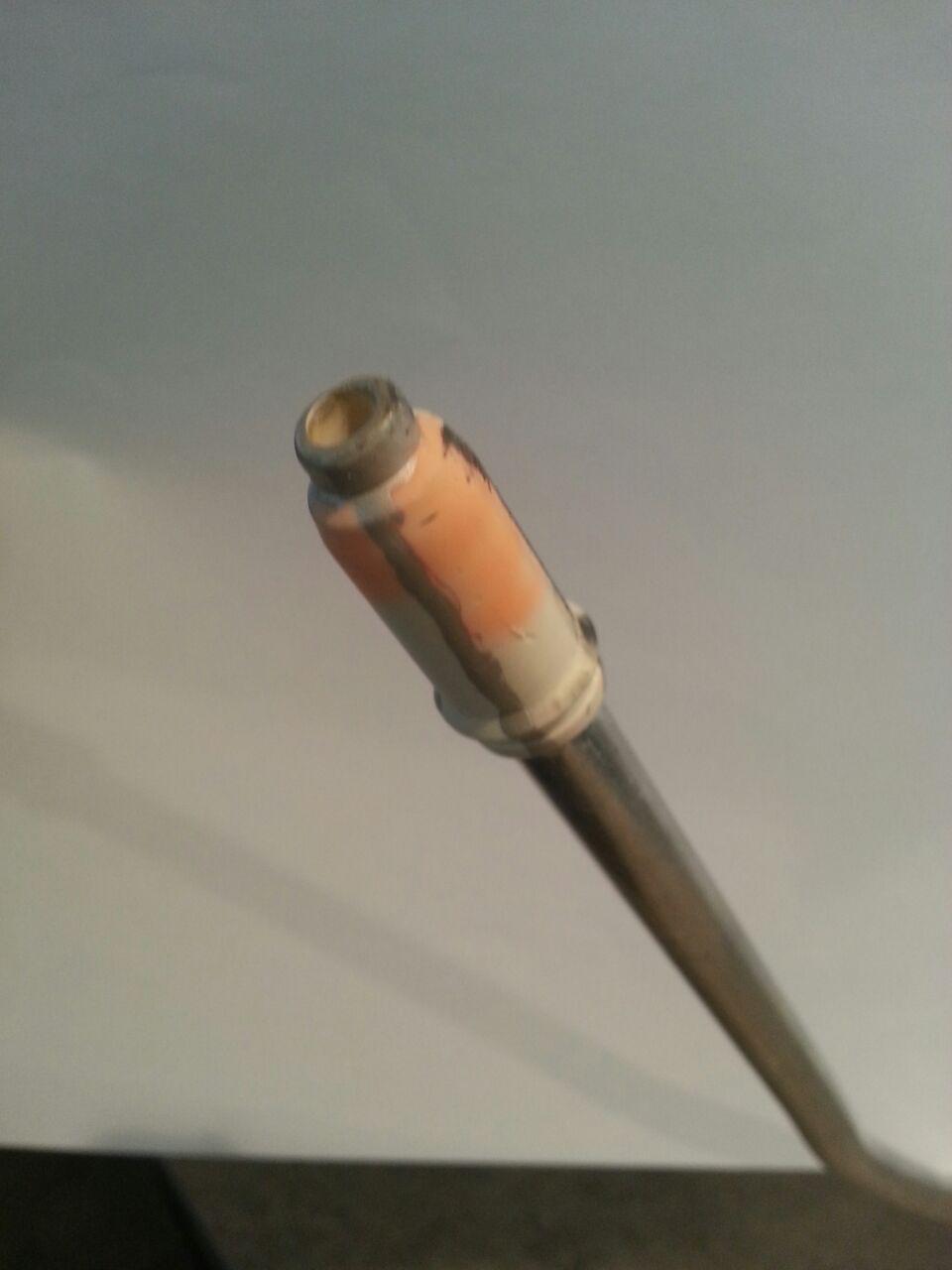 It shows one path going up to metallic shaft, but there actually three one. The tip of the tip is fully coated with the conductive polymer. Basically, all that is (light)-grey are CircuitWriter traces.

After applying it, I let cure at 15cm from 40W light bulb for 2h+, tested it carefully, re-applied, cured and left overnight.

My attempts at fixing it

When at first it not work (no reaction neither by an iPhone nor by a Sony Xperia), I suspected one path to the metal shaft was not enough and drew two more paths. Still did not help.

Another guess: there wasn't enough contact betwen the plastic tip and the metal shaft. I wrapped the critical region with tinfoil to guarantee a conductive path. Still, did not work.

Do I need to apply yet more of the stuff? Why doesn't it conduct?

UPDATE 27 June 2016 - I solved my issue. Posting my finding for others as information.

I had no luck with the CircuitWriter, so a different approarch was attempted, which does work. The reliability of it (in regard of beeing registered by a touchscreen) depends highly on the "craftsmanship", but not so complicated that it could not be done by average people with average tools&materials.

So, a piece of conductive foam was used, the kind that comes with graphic cards and such nowadays. The foam was rolled tighly (or in my case I wrapped it around a Q-tip with the help of a thread to add stability) and connected with simple copper wire (for capacitance) and the whole thing was placed into the stick, thanks to it beeing hollow. That looks a bit ugly and primitive, but is working. Here are the photos

Still I am not completely satisfied. This construction is not very robust and the first incarnation failed after about 2 weeks due to the foam wearing out from typing. The positive aspect is that it is soft, so there is no chance of you scratching the screen.

The next approach I will try will be some adhesive copper tape, as suggested by HighInBC and Dmitriy Grigoryev. Should I post the results then?

Capacitive touchscreens are designed to react to the capacitance of a human body, which is about 100 pF according to Wikipedia. So when a regular user touches it with their finger, the equivalent schematic might look something like this:

Now, when you made your tweak to your head stick, you started looking something like this from touchscreen's perspective:

As you can see, the issue is not in resistance of the traces you've drawn (it's minuscule compared to body resistance), but the lack of electrical link between your stick and your body. The capacitance of the stick itself is very small (probably <1pF) and not represented on the schematic.

You should add a connection from the stick to your bare skin, or to anything of significant capacitance for that matter. A short wire from the base of the stick, around the ring holding the stick on your head and back to the stick should do it, assuming there's no hair in the way. Make sure to pick a comfortably thin, non-insulated wire. Unfortunately, I don't think you could use your CircuitPen for this, as the traces will eventually be washed off by sweat.

First, is your pen well-shaken, so the ink is silver-laden?

If not, the ink may be barely conductive. The ink will settle out to form a silver clot inside the pen, and the your circuit-lines are mostly the solvent, not the silver. These pens contain weighted beads to stir up the silver and distribute it in the ink. (Like the metal beads inside an aerosol paint can.) Always shake up the pen for minutes until the beads come loose, so they 'clack' back and forth inside between the ends of the pen. I do this by thumping the front and back of the pen alternately against a solid surface (with tip-cover on, of course,) then shaking for 30sec once the beads are making a sound.

Besides too-sparse silver, I would suspect a bad connection between the metal (aluminum?) shaft and the silver ink. Aluminum foil won't help this. Instead, clean off most oxide by scraping/sanding a 1cm region of the metal that's next to the plastic. Coat it heavily with silver ink. When dry, position a thick ink-droplet at the joint between the ink-coated shaft and each ink-trail you've painted on the plastic.

To make thicker coatings, you can unscrew Circuitwriter pens, tilt, and use the back of the pen as an inkwell with toothpick or tiny paintbrush. Or, after shaking to mix the ink, unscrew the pen and just dip your tiny brush in the ink-blob found in the back of the white tip section. The blue body unscrews from the white tip. Note that the threads of the pen are backwards! With the pen pointed up, turn the white tip CW, not CCW.

Finally, if your pen is old, the solvent escapes, the ink thickens and won't flow. (Open the pen and find that the ink stays put, like paste.) Thin it with a small amount of common spray-paint solvent, xylene.

I have had trouble with conductive ink not that being all the conductive. It may have been old stuff but it never really worked that well for me. I ended up using very thin and narrow copper tape. Once applied it can be rubbed until it sits flat on irregular surfaces. It is like flat wire that sticks to stuff.

Not the answer you're looking for? Browse other questions tagged touchscreen capacitive conductive or ask your own question.