How do I size the output capacitor for a DC bench power supply?

I'm designing a DC bench power supply and have come to the matter of choosing the output capacitor. I've identified a number of related design criteria, but I'm finding my reasoning still going a bit in circles as I try to sequence these into a sensible design process.

Here's the working schematic to give you an idea what this will go into. The constant current circuit is not pictured.

Here are the considerations/relationships I understand so far:

So my question is: "How do I approach selecting the output capacitor for my DC bench power supply design?"

My best guess is this:

Am I on the right track? Any guidance from more experienced practitioners will be very gratefully received :)

You seem to have the whole circuit in LTspice anyway. A start-up analysis will tell you most things you want to know. Replace your "big" (45 V) DC source with a source that has a pulse definition, i.e. one that starts at 0 V and steps to 45 V within a short time (say 10...100 ns), after a short time (say 1 µs). That way, all the capacitors will be initialized for an unpowered circuit, and you see your regulator doing it's very best to charge the output capacitor. Using this setup, you get the whole picture: First, the uncharged output capacitor produces a dead short across your output, so you see your regulator starting at its max. current. Once the voltage at your output capacitor reaches the desired value, you will also be able to observe any possible overshoot.

An alternative approach would be to include a current source (actually, sink) at the output, stepping between 0 A and your max. desired output current.

As a rule of thumb, I would start with 1000 µF per 1 A of max. designed output current and try (".step param") values below and above (10 µF, 47 µF, 100 µF, 470 µF; 4.7 mF, 10 mF). Also, things won't become too critical: Your pass transistor is an NPN, and this design is basically stable anyway (as opposed to an LDO, which uses a PNP pass transistor). A stability analysis of your circuit might really be a good idea; even though your schematic looks a lot like a linear regulator with a common collector pass transistor at first glance, you really have a common emitter circuit, and those tend to be unstable. The reason is that the output impedance of a common collector amplifier is roughly the transistor's base driving impedance, divided by the transistor's beta and this value does not change in any significant way when the load varies, and it is low. On the other hand, a common emitter ampifier's output impedance is defined by the load itself, which stays within a certain range at best, but can't be designed into the voltage regulator itself, of course. (*)

Here's a source with a really good explanation about a linear regulator's stability, but we have to swap "PNP" and "NPN" in our example, because we are not (!) dealing with the same circuit here. For the "ususal" way the pass transistor is wired in linear regulators, the quote is: "The PNP transistor in an LDO regulator [...] is connected in a configuration called common emitter, which has a higher output impedance than the common collector configuration in the NPN regulator." (National Semiconductor - now TI - app'note AN-1148, section 9)

(*) Had to edit my first version of the answer because I had overlooked some important issues. As can be seen in some comments to other posts, the problem has to do with repairing vintage lab equipment, and you can never learn enough from fixing stuff. Here's an excerpt from Jim Williams' article "The Importance of Fixing", as published in the book ART & SCIENCE OF ANALOG CIRCUIT DESIGN: 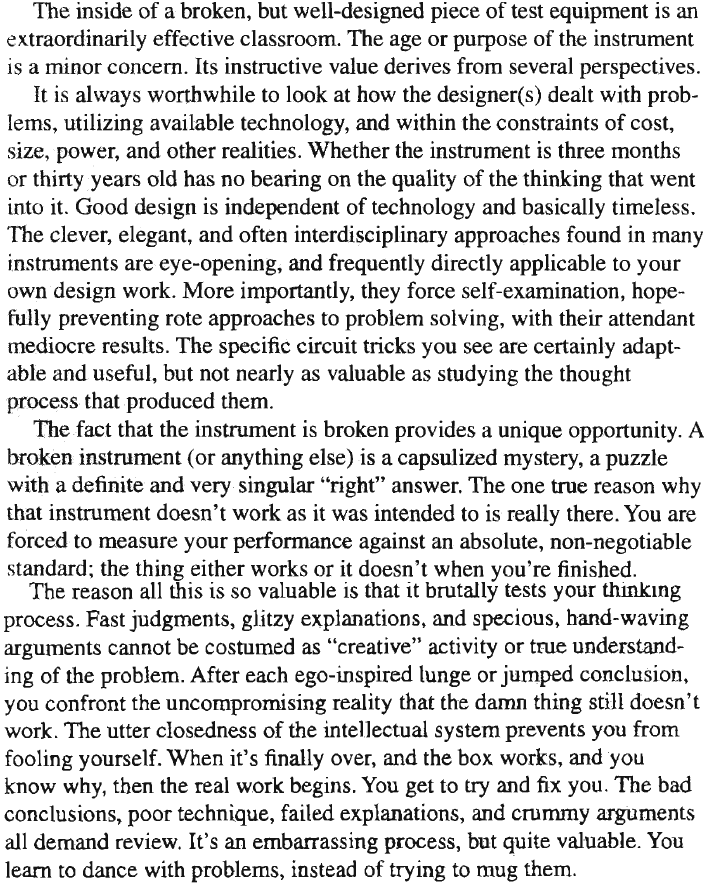 Oh how I like the part about fooling yourself...

Basically you need to consider best and worst cases for the load, in terms of its equivalent resistance and its equivalent capacitance (which goes in parallel with your output cap). You cannot design for absolutely any load.

For the extreme values of the load resistor, it's easy enough to decide on some min value as this is determined by the max current your pass element can dish. But you also need to consider a high impedance load because it pulls the output pole to lower frequencies, possibly compromising stability.

If you're going to plug in as load some board that has sizeable bypass/tank capacitors at its input, then you can't ignore their effect on your regulator. Boards with 470-1000uF at their DC input can be encountered without much difficulty.

Also, in practice, your regulator won't react the same to negative and positive transients. You need to evaluate the step response on both positive and negative load dumps. You have to worry whether the SPICE model for the opamp you use is going to be good enough to predict/simulate this difference.

For further reading I recommend Rincon-Mora's book on LDOs. As far as I know, it's the only recent [i.e. in print] book on linear regulators and he has some industry experience (worked at TI). The first chapter of the book has the theory/formulas and some examples for calculating/estimating the transient response and there's a chapter on system design that goes into stability. Alas, as the book focused on board-level regulators, the worked-out design examples in the book (but not the theory) usually assume that the load capacitance is [at least] an order of magnitude lower than the output cap of the regulator. His design approach mantra is basically "the design cycle of a linear regulator usually starts at the output and ends with the input".

Not the answer you're looking for? Browse other questions tagged power-supply capacitor voltage-regulator analog control-system or ask your own question.