I've been shopping for some mosfet transistors, for a starter kit, and noticed listings that state a mosfet is suitable for 5v logic, but the data sheets says Gate Threshold is 1-2v. 4v gated mosfets, which are closer to 5v, by the same seller are not advertised as suitable.

I understand that applying Vgs voltage to the gate will switch the mosfet on, but how does it interact with different voltages?

The gate-source threshold voltage is the voltage that is required to conduct (usually) 100 uA of current into the drain. Different MOSFETs have different definitions and some devices define the threshold voltage at up to 1 mA drain current.

It's a fairly useful comparitive indicator of how a certain device might operate when given a proper logic level signal but it's always best to examine the data sheet. Typical you might find this: - 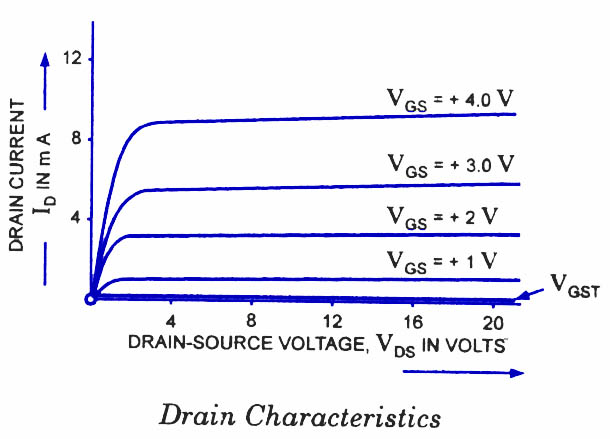 You can see V\$_{GST}\$ causes very little current to flow but raising the gate voltage above this you'll see that the device conducts far more current.

Usually, maximum rated voltages for MOSFET gates is +/- 20V and so there is a fair bit of margin between operate and damage levels.

As Andy says VGS(th), i.e. threshold gate-source voltage corresponds to a low current, when the MOSFET barely turns on and Rds is still high.

From a user/shopping perspective what you want to look for is guaranteed (and low) Rds(on) for a given VGS that you plan to use in your application. Alas you did not link to any datasheets or name any specific parts in your question, but I'm pretty sure the guaranteed low Rds(on) is only given at 4-5V for your MOSFET.

Also the MOSFET will not "heat/burn" at higher VGS, as long as you do not exceed the maximum allowed. In fact it's better to drive with a high VGS as possible to ensure it's fully on.

Here are the relevant bits of the datasheet:

Which is detailed as:

Do not exceed ratings:

Also worth noting is the graph of Rds(on) versus Vgs and drain current: 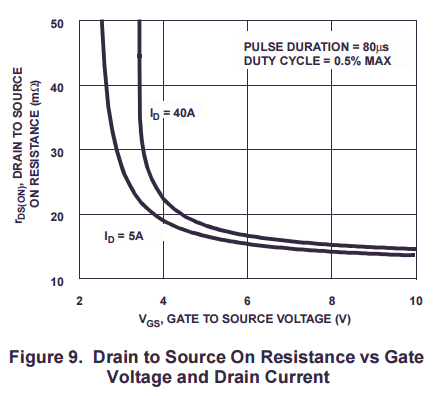 In general, the low Rds(on) promised will have a fairly specialized test condition (like a certain duty cycle). As a rule of thumb, I double it vs. what's promised in the datasheet.

Not the answer you're looking for? Browse other questions tagged voltage transistors mosfet or ask your own question.