How do I derate paralleled diodes with negative temperature coeffecients?

In my application, my load current is 1.4 amps, and for reasons of cost, availability, and recovery time, I want to use this particular 1 amp diode. Like many diodes, this one has a negative temperature coefficient; the hotter they get, the lower their voltage drop for a fixed current. This means that if you parallel two diodes, they are not guaranteed to share current well; one device will take more current than the other, heating it up more, causing it to take even more current.

How can I estimate how many 1-amp diodes are needed in parallel to carry 1.4 amps?

A diode junction can be approximated as a voltage drop in series with a resistance. These two values are occasionally stated explicitly on a data sheet, for they can always be extrapolated from the V-I curve for the device: pick two points in the linear region of the curve, and make a line between those two points. The V-axis intercept is the voltage drop, and the V/I slope is the resistance. Since the V-I curve changes with temperature, so will these values.

Putting two of the specified BYG23T diodes in parallel, assuming one to be at the 150C max temperature and the other to be at the 25C "cold" temperature, we get this approximation, with V2/R2 as the hotter of the two diodes: 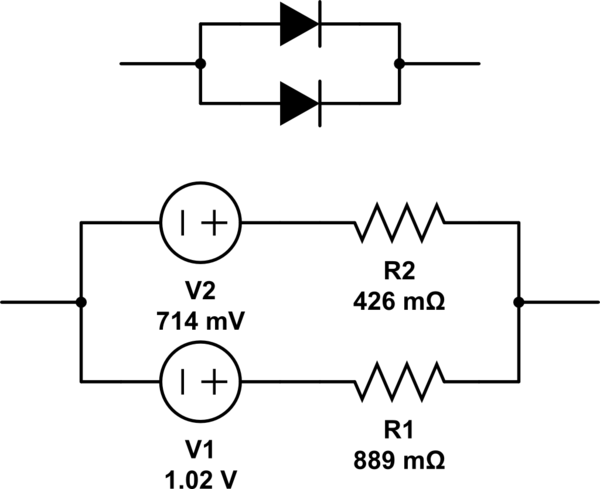 Obviously this is a worst-case scenario; it's almost unimaginable that one diode will be at 150C while the other is at 25C. But if we survive this scenario, we'll also survive any more realistic ones.

Let us also assume there is exactly one diode at 150C, and an arbitrary number n of diodes at 25C. The single diode at 150C will limit the entire parallel combination from taking more current, and all the other diodes being at 25C will minimize their contribution towards the overall current rating of the paralleled set.

We know that the total current through the paralleled set is the sum of the currents through each branch.

We also know that the voltage across each branch is identical.

Alternately, if we know \$n\$ we can solve for the actual current that will be seen by the hottest diode.

In this particular case, with the values from this particular diode and a 1.4 amp load current, three 25C diodes are needed in parallel to guarantee that the 150C diode will not see more than 1A. Actual current through the hot diode in that situation comes to just under one amp.

That gives us a total of four paralleled 1A diodes to carry a 1.4 amp load. This is almost certainly overkill. Our calculations could be improved if we could account for the effect of temperature on the V-I curve of the device. But the equations get much more complex, and we would have to have some idea on just how much variation in temperature response we could expect from device to device. That's not a spec I've ever seen on any datasheet.

From the equations I've run for this particular set of diodes, 25% imbalance would cause one diode to take all the current at half an amp; 31% at 1 amp. Since the data sheet doesn't list variation from component to component, by paralleling diodes we are always taking a risk that the imbalance might be enough to ruin the whole scheme.

Not the answer you're looking for? Browse other questions tagged diodes parallel thermal derating or ask your own question.

18
Is full wave rectifier better than half wave one?
17
Full-bridge converter rectifier kicks
1
How do I select the Correct Diodes and Resistors for my LEDs?
7
How can SCRs be effectively paralleled?
3
Thermal Runaway in Diodes
16
How many MOSFETs can we safely parallel in condition of very high currents? I had problems with a motor application at 48V 1600A
1
Paralleling two VR - when neither is overloaded
3
Precautions needed to parallel P-MOSFETs as high side load switches?
1
Circuit with dual power source: Replacing diodes with MOSFETs
4
Diode OR 4 batteries