Very basic question here and I'm only looking for a generic over view, but is it a too high current or a too high voltage that will damage electronics? I assume it will depend on the component in question -

1) For example if you have a working circuit with a 10V battery, fixed 5 Ohms resistance and a current of 2A. If you then swap that battery to 20V, would it be the new current of 4A that does the damage or that fact that the voltage is now 20V? Both values are higher than they should be so which factor will do the damage, both?

2) Also, if when you swapped to a 20V battery, you also increased the resistance in the circuit to 10 Ohms, could this still damage components in the circuit? The current is now the same as it was in the original (2A), but the voltage has gone from 10V to 20V, could this do damage?

3) Finally, you could take the original circuit and lower the resistance to 2.5 Ohms, now the voltage is the same (10V) as it should be, but the current has risen to 4A, I assume this could cause damage depending on the components in the circuit?

Any help would be appreciated, thanks in advance.

Edit - I didn't make it very clear, I wasn't specifically talking about damaging the resistors, I mean't damage various components that could be in the circuit.

A general answer is that electronic/electrical components are damaged when their electrical ratings are exceeded. Excessive current results in excessive heat which will destroy both passive and active components. Some passive components, such as capacitors have a max voltage rating, which if exceeded can result in failure of the dielectric (insulator) resulting in excessive current, and ultimately smoke. Generally, exceeding voltage ratings of passive compnents causes insulation failure. With active components, excessive voltage will cause a breakdown of the internal junctions of the diode, transistor, etc, which will also allow excessive current, heat and some smoke. However, in these cases the current will be quite a bit lower than when passive devices are overheated. My experience is that even a small spark on a transistors leads will destroy the component. The over-voltage condition breaks down the semi-conductor junction and it does not heal. The part is now just a lump.

Things like resistors will fail from excessive power dissipation- they get too hot and the materials they are made from suffer irreversible degradation. For example, the lacquer on the outside of a through-hole resistor may discolor or burn off, the resistance value change as the element oxidizes until finally it changes out of spec or opens up and starts arcing. Wires and PCB traces behave like resistors- too much current and the insulation burns off, the PCB delaminates or the trace opens up.

In low voltage circuits usually the voltage rating is not an issue- but if you were to take (say) an ordinary 0805 20M resistor and apply 2kV to it the power would be (in theory) only 200mW (which might be in spec or slightly outside of it) but the resistor could arc over and cause irreversible damage almost instantly. Similarly, you can have arcing between traces.

Things like capacitors and MOSFET gate oxide can fail when they are exposed to excessive potential which causes irreversible damage to the insulation. There will be some very localized heating (or more depending on what happens after the insulation is punctured) but that's not the main cause.

Things like diode and transistor junctions have breakdown voltages above which the current increases rapidly with voltage (sometimes they snap on with an avalanche/negative resistance characteristic). If the current is limited to that the heating is kept to a sensible amount (and doesn't increase too fast so that the heating is not localized to tiny areas) then this can be non-destructive. Otherwise the junctions can heat until they are not longer good semiconductor junctions any longer (in the hundreds of degrees C to destroy a silicon junction).

Getting back to your specific question about resistors- none of the voltages you mention is likely to run into a maximum voltage specification on the resistors (anything under about 25V you can forget about for resistors that are not an inhalation hazard).

So you're left with maximum power dissipation (and maybe maximum current if the resistance value is stupidly low, but let's ignore that). Here is a datasheet for a series of resistors, say we have a 10\$\Omega\$ resistor 0805 size. Rated power is shown as 0.125W and maximum working voltage as 150V. If you look at the "Power Derating Curve": 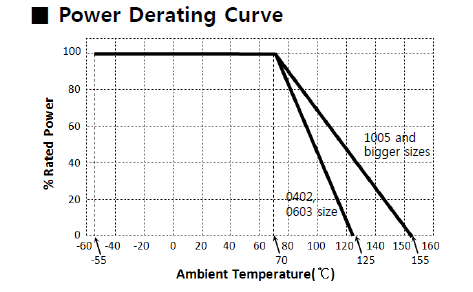 .. you can see that the rated power holds for ambient temperatures up to 70°C, but above that you must consider the rating to be less, according to the curve. Why does it level off at 70 degrees? Most likely the resistor would survive okay at >100% power if the ambient is kept cool, but the manufacturer does not want us testing that.

In your first example, the resistance is fixed and you double the voltage- so the power should go up by 4:1. (from 20W to 80W) If your resistor is rated for 80W or more (under the conditions it sees in your box) then all will be fine. Otherwise, it may not be. Damage is caused by the heating, which is the product of voltage and current (obviously the current increases because the voltage is increased).

In your second example, you've doubled the resistance and the power is now 40W rather than 20W. If the resistor is rated for 40W then all will be fine.

The third example also results in 40W of dissipation. So if the resistor is good for 40W you're fine.

Too high a voltage tends to cause a catastrophic breakdown of a transistor. Once you apply over-voltage stress and the transistor breaks down, the pin will show short circuit (usually to ground). If you catch it, or limit the fault current some how, this type of failure will not be visible outside of the IC. It may be visible to microscope after exposing the die.

Of course, after a pin fails short, if the current is not limited, the component will probably get pretty hot and charred and show more obvious signs of destruction.

If you allow too much current to go through an IC, you will usually see smoke at some point. To be honest, I haven't had problems with this very often. A lot of regulators and such are protected against over-current. But I have seen ESD-type Zener diodes smoke after sustained exposure to high current.

This could also happen with a transistor that is dissipating more power than it is rated for. But, like I said, somehow I have not had to deal with that very often.

Ultimately, most things fail due to too much heat. If you are talking about a purely resistive load, such as a light bulb, this is pretty obvious. Exceed the voltage and current ratings, and the bulb burns out very quickly. In this case, you can't separate too much voltage from too much current as the resistance of the bulb is more or less constant so doubling the voltage will double the current and quadruple the power.

Things like diodes and transistors also generally fail from heat-related issues. Take a diode and apply a voltage that exceeds its reverse breakdown voltage. When the diode enters reverse breakdown, it will let current flow through. Current flowing through the diode times voltage drop across the diode equals power dissipated in the diode. Diodes can break down at a voltage of a few hundred volts, so this can dump heat into the diode at a rate of hundreds or thousands of watts, heating up the junction in the diode very quickly and causing it to melt. If it heats up fast enough, it can vaporize and you get a nice 'bang'. Same thing happens with transistors.

In some cases, you can have issues with too LOW a voltage. Generally this is a problem when you have a poorly-designed step-up switching converter, such as a buck-boost or SEPIC, which tries to boost up the low input voltage and as a result generates a lot of heat by operating at a low efficiency.

One thing I should note: power ratings are generally related to operating temperature ratings. The maximum power will then be determined by the ability of the device to dissipate that power while remaining below the maximum operating temperature. It is possible to exceed rated powers for certain components under certain conditions. For example, a 5W resistor could actually dissipate 100W, so long as it only does that at a 5% duty cycle with a short enough on time that the resistor does not heat up enough to cause damage (i.e. 100W for 10s would probably cause it to fail, but 100W for 10us would probably be OK). It may also be possible to dissipate 100W in a 5W resistor continuously if you can build a system to pull heat out of the resistor fast enough to keep the temperature inside the resistor within its operating range (i.e. submerge it in liquid nitrogen).

resisters are rated by the amount of power they can dissipate with out being damaged.

Power for a purely restive circuit is:

The damage is caused by the resistor dissipating more power than it is rated for, through heat.

Not the answer you're looking for? Browse other questions tagged voltage current resistance basic damage or ask your own question.

5
Voltage distribution between components
1
Current flow in series circuit with different (unknown) resistances
1
Two opposing voltage source, of different current capacities?
0
Calculating voltage in a simple circuit
4
Understanding current, voltage and resistance
0
Why is it said that when voltage source connected in series would only increase the voltage and not the current?
22
Finding a faulty chip that draws too much current
1
How much current and voltage should be flowing back into my battery?
2
Does a correctly sized resistor protect low voltage components from a high voltage source?