How to limit current in order to power small car radiator fan with laptop charger?

I'm trying to do a makeshift small grinder/sander out of a car radiator fan, but I want to power it up with a laptop charger for convenience.

Since it's a salvaged fan, I wasn't able to look up its schematics, I only know it takes 12VDC input (as most car radiator fans do). These fans typically go from 10-15 Amps while running, with up to 25 Amps inrush.

I connected it as-is for a short period, and everything works fine, I get satisfactory RPM and torque on the fan. However, I wouldn't want to leave that setup running for a long time, for multiple obvious reasons.

So far, I've only come up with this:

The problem with this setup, is that those kinds of resistors and pots are hard to come by, and usually expensive.

Can anyone come up with a better / more intelligent solution and suggestions?

Most answers I found are related to more common uses, at usually lower amperage.

I have moderate experience with electrical appliances, what I don't know I'm willing to research, so don't hesitate to go wild.

Is there a reason you're not controlling it via PWM? The main argument against is the complexity, but would give you the effective reduction of voltage you're after. Though there are potential issues with using PWM on an input to (what I assume is) a DC brush-less motor, you may want to end up smoothing it out with capacitance, but then it becomes a DC-DC converter...

Alternatively, as your current plan is to change the voltage across the motor, it isn't insane to considering using a DC-DC converter with a potentiometer on the voltage setting pin.

Third option would be to put a known fixed resistor in series with the fan, and a lower rated pot across the pins of the motor. 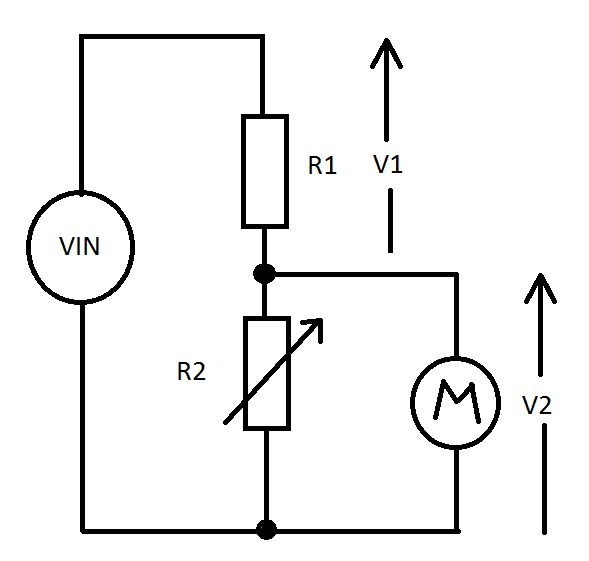 So R1 is a high wattage (100W), low resistance device, R2 is a high resistance POT (you should really put a high value resistor to go in series with the POT to make sure you can't set it too low). But his is a pretty wasteful way of controlling the fan, burning energy in the resistors rather that switching off as you would with a switched DC-DC or PWM option.

Cheap, Simple, but no over current protection.

Several resistors (resistor bank) in series. Put a switch across each resistor bank. Opening or closing the switches individually will change the overall resistance.

I will leave all the ohm's law calculations for resistance and power rating of resistors up to you.

EDIT : Probably better to use the resistor banks in parallel (with switch then in series with each resistor bank. This allows use of higher value resistors.

Just thinking a power transistor with a potentiometer as voltage divider/ base current control should work. Just never fully open the transistor or something will die. ;-)

Not the answer you're looking for? Browse other questions tagged dc-motor potentiometer current-limiting mechanical or ask your own question.