Can the coil in a magnetic field be replaced by a copper mesh?

From theory, I remember that EMF induced is a function of the rate of change of magnetic flux. A generator is typically a changing magnetic field applied to a bunch of diamagnetic wires wound closely together over a laminated core. Part of the reason for the close winding is probably to expose as many turns as possible to the changing flux.

I'm thinking about using a fine copper mesh like this one: 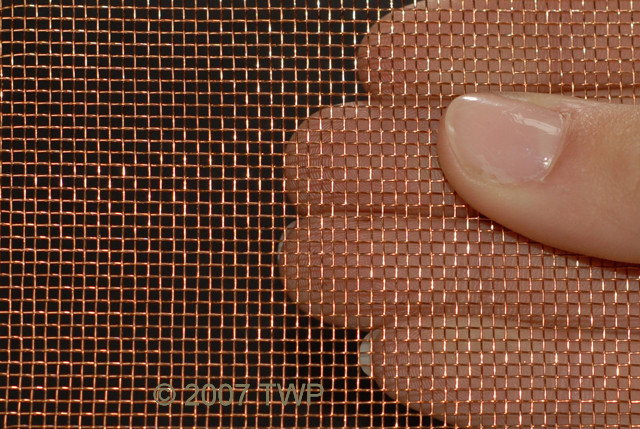 That mesh was earlier an antenna on an old old old valve radio instead of a coil. It's also used in Faraday cages.

What would happen if I used this the micro turbine I'm thinking to attempt? Worst condition is probably a brown-out if the induced current follows different paths ....

EDIT: The intent with using the mesh is as an experiment to try something different (+: A friend has a repair shop, and the facilities to do the winding if required

It sounds like your understanding of the theory is missing an important point: Each turn contributes to the EMF. There's a big difference between one turn of large wire, and 1000 adjacent turns. For a large number of coils close together, Faraday's law of induction can be restated as

where \$N\$ is the number of turns, and \$\frac{d\phi}{dt}\$ is the rate of change of flux. For simplicity, this is often developed using one loop.

The wires used to wind the generator coils may look like plain copper wires, but they are actually coated in a thin layer of enamel, which electrically insulates them from adjacent wires.

I believe that the mesh you show has un-enameled wire (Test for continuity between crossing wires to be sure) which connects at every crossing. Using this to wind a generator would result in one turn, giving you an EMF \$N\$ times smaller than what you'd get with an equivalent number of turns of magnet wire.

If the mesh does have enameled wire, and you can make the connections such that each wire contributes to a loop, and you can bend the mesh such that it occupies little more space than the equivalent number of turns of magnet wire, I see no reason why it would function any more poorly than the magnet wire version. That said, it's an awful lot of work for little-to-no gain. Get some magnet wire, find a university or business with a coil winding machine (or buy one/make one with an electric drill and footswitch), and do it right.

First, whether the coil wire is made of diamagnetic material doesn't matter. It's the fact that it conducts electricity (has a low resistivity) that matters. That's the point of electric wire.

Second, a mesh doesn't make a lot of sense if you want to get useful energy from the changing magnetic field, not just dissipate it as heat in the mesh. At least how I think you mean to place the mesh. You haven't explained that, and without a diagram it's hard to tell what you are really talking about.

A mesh approximates a conductive sheet, so do your thought experiments with a conductive sheet. There are coils wound from conductive sheets, but then the sheet is really just a high current wire that happens to be a lot wider than tall. It is also carefully arranged so that the magnetic flux lines don't pierce the sheet. If they did, it would cause circular eddy currents which just heat the sheet instead of delivering useful electric energy from the sheet.

To produce magnetic field in mesh, it is possible if each wire is separated and insulated from each other wire and properly connected to source of electric current and tension-voltage.

You must use insulated wires and make a mesh, then MUST CONNECT EACH WIRE in such connection that you can get straight line wire and magnetic field around each wire in mesh.

The problem as stated is quite open. By that I mean very little is specified in terms of constraints. This could be "good" or "bad". I am at present doing research with this type of geometry and conductors. In the engineering realm the structure is often marketed as "expanded metal", and has considerable commercial application. Of course, I can't mention the proprietary aspects of my company's interests. In a rigid, connected, conductor wire grid a uniform time changing magnetic flux will result in currents that cancel themselves out everywhere except perhaps at the periphery. However, the situation may be quite different for an applied non-uniform and time changing asymmetric magnetic flux. As long as there is sufficient skin depth, the currents would only completely cancel under special conditions. So, if the time dependent geometry of the magnetic vector field itself can be appropriately "shaped", uncanceled induced peak currents over a substantial range in magnitude are possible.