Opto-isolator output from collector vs. emitter

I have an Isocom ISQ2X quad opto-isolator (datasheet) that I will use to drive a logic input. The opto-isolator's simplified model given by the datasheet is pictured below. The transistor base pin is not brought out.

I have two possible configurations, pictured below: 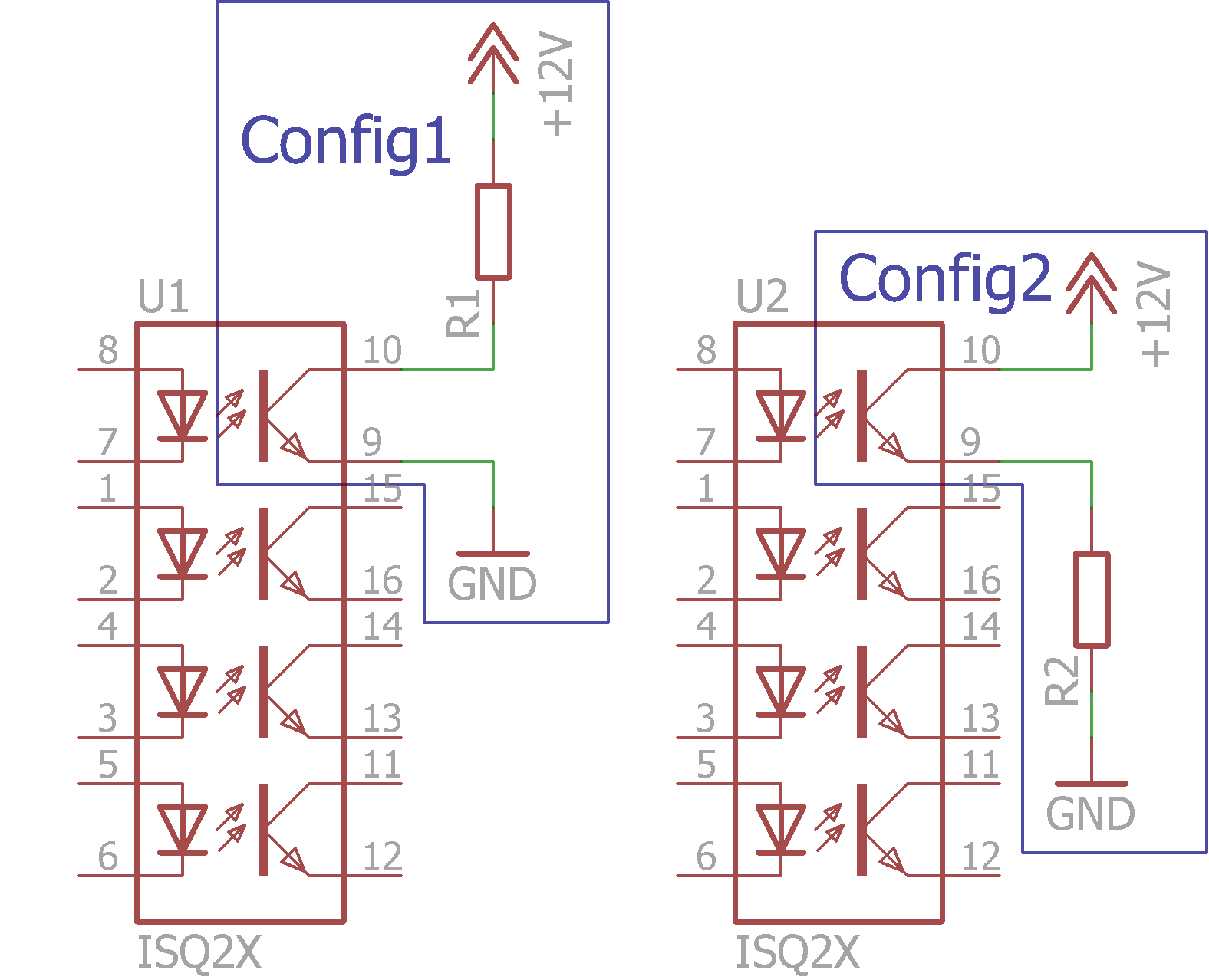 My question is: Aside from the inverted logic, are there any differences between these configurations? For example: does raising the collector voltage (when the transistor in Config2 is activated) have any effect on things like current-transfer-ratio or saturation voltages?

Edit: I guess I was hoping for an explanation involving some sort of a phototransistor model and/or an answer citing some book/literature. As I don't think this question will pickup steam I've marked Olin's answer as accepted since he elaborated a bit on his answer - but I'm still open to more people weighing in on this.

Your two configurations are equivalent in output drive, although obviously the output logic is inverted between them.

The decision therefore comes down to which polarity is more fail-safe and idle current issues. Config 1 fails to high and takes active current to be low, with config 2 the opposite. Use whatever works best for your system.

One reason people knee-jerk to config 1 is that a switch between a line and ground with a pullup is more common. It is often convenient to be able to ground one side of the switch. Far more things come with built-in pullup resistors, as apposed to built-in pulldown resistors. If this signal were going into a microcontroller, for example, then R1 could be internal to the micro and you'd use config 1. In that case logic polarity doesn't matter since micros can generally deal with low or high equivalently.

I agree, they are equivalent, and you can use config 2.

If you are using the optocoupler to transmit PWM signals to the H-Bridge driver, be careful about the time response. According to the data sheet the rise time is 4us with a 100 ohm load. Since you are using 12V to supply the output R2 must be at least 1.2k ohm. The rise/fall times will probably be slower with the higher resistance.

You can expect your PWM timing to be distorted, especially at extreme duty cycles.

Not the answer you're looking for? Browse other questions tagged opto-isolator isolation phototransistor emitter-follower or ask your own question.

7
Optocoupler high side vs low side switch
0
What is the expression for collector current (Ic) in function of CTR for optocoupler?