Small detail about the super diode circuit that bugs me 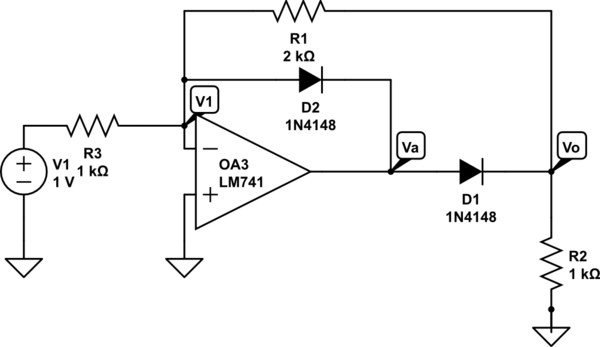 I understand that we must assume initially assume that the op amp is closed loop gain, because of the diodes. V1=0, so there is a current coming from the voltage source. I know that all the current is going through the D2 diode, because if it went through the R1 resistor to Vo, the D1 diode would be in reverse bias and wouldn't allow any current to Va which would contradict our initial assumption that the op amp is in a closed loop.

My question is where does the current go?there is 1mA current going through D2.Since we now know that D1 is off, and there is no ground, my only other guess is to the output terminal. It might seem like a dumb question that I should already know how to answer, but from how I understood it up until now, since no current goes through the input terminal, it has to go through the loop, but now that I think about it, it doesn't really make sense because the op amp is the one that is supposed to produce the current in the first place, isn't it?

An op amp can source or sink current (it can go in or come out).

If you have a positive input voltage on the inverting terminal, the op amp's output will go low quickly. At a certain point, the output voltage of the op amp will be lower than the voltage at the inverting terminal by some amount necessary to make the diode conduct (say, 0.7 V). The diode D2 is now forward-biased because there is a positive input voltage and the output is at a sufficiently lower voltage.

The op amp's output will go to a voltage where the diode conducts the right amount of current (which is also flowing through the input resistor R3) so the appropriate voltage drop occurs across R3 to make the voltage at the inverting terminal 0 V.

My question is where does the current go?

You are correct, the current does indeed go into the OpAmp. It's not shown in this circuit diagram, but in a real circuit, the OpAmp will sink the current into it's negative power rail. When OpAmps output current, the source is the positive power rail. So in normal operation, the OpAmp's output voltage must be between the two power rails.

0
Analyzing Opamp circuits
2
How does a super diode work when the diode is directed towards the output of the op amp?
2
Why is the output of the precision rectifier 0 when the diode does not conduct?
1
Q: How to analyze Precision rectifier op amp configuration
9
How does an op amp integrator work?
0
How to calculate an op-amp's current usage based on datasheet's supply current and its Vout terminal?
0
Question about the slew rate
1
LASER diode driver circuit
0
Op-Amp Impdance Question