Question about this diagram [duplicate]

Ask Question
Asked 6 years ago
Active 6 years ago
Viewed 222 times
2
\$\begingroup\$
This question already has answers here:
Why is there a diode connected in parallel to a relay coil? (6 answers)
Closed 6 years ago.

I am very much a software person and a rookie in electronics.

I am trying to understand why do we need Diode D1 in the diagram explained in this post: 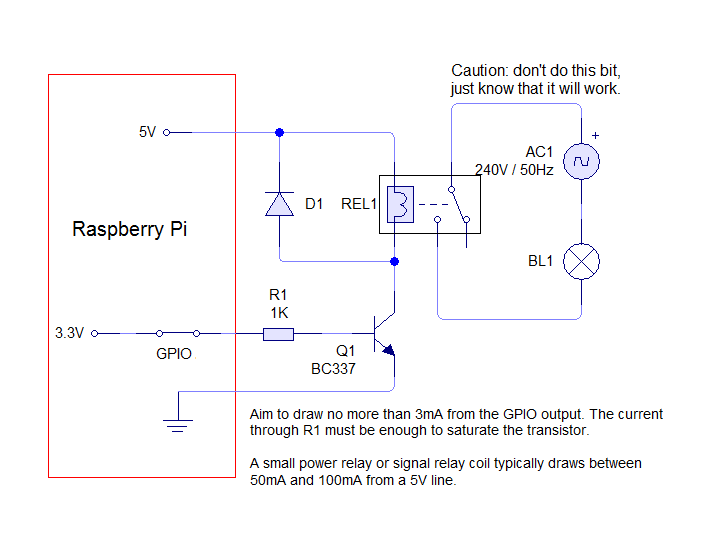 I understand the need to the transistor to protect the GPIO pin; however, do we actually need D1? Is it a nice to have or if I don't use it, I damage my PI?

Yes, we need that diode - the so called flyback diode. It prevents the premature death of the transistor due to the voltage spike across the inductive load when its supply voltage is suddenly reduced or removed - aka when turning off the relay.

So, yes, you definitely need the diode. Without it you would probably blow up Q1 when you switch off the relay, and possibly damage your Pi.

45
Why is there a diode connected in parallel to a relay coil?

10
shorting a remote control pushbutton with GPIO and a transistor
4
Why do I need this relay?
1
Does this schematic with an old doorbell electromagnet look ok? And could it be improved?
6
Control 5v relay through 3.3v GPIO using NPN transistor
0
Can I drive a BLDC driver with this diagram?
3
RPi GPIO speed issue in bare metal
1
Using Raspberry Pi to read open collector outputs from tally connector
2
Basic Questions About a Simple Circuit (GPIO-Controlled Relay on RaspberryPi)