Why do these two dramatically different sized heatsinks have similar thermal resistance?

I get 1.84C/W at 100LFM when I punch these values into a heatsink calculator.

Then, I went on Mouser and looked at their offering for heatsinks and found a ton that are way smaller with similar (or even lower) thermal resistance values. Here is an example.

Am I misunderstanding something here? Why does a heatsink 4 times larger have the same performance as the one I listed from Mouser?

Added (after Icy's answer): all the heatsink calculators i have found online assume at least 100LFM but i am interested natural convection values. 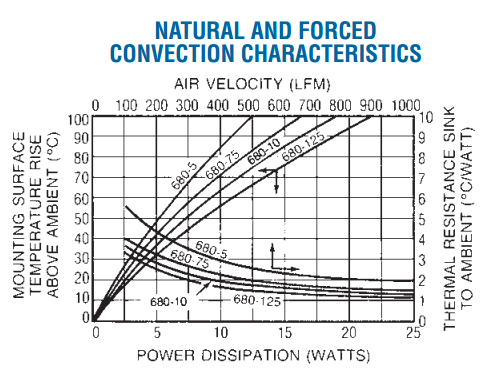 At 400 LFM it's dissipation is about 1.6 C/W, at 100LFM is about 3.4C/W (from the lower set of curves, which have their scales on the top and left sides of the graph). This can be double-checked against the quoted value in the table in that datasheet given as 1.5°C/W @ 400 LFM. (I guess there was a bit of rounding in the table or the graph is a bit off.)

For natural convection, the upper set of curves is used. At 7.5W for example, the temp raise (over ambient) is 45C. This coincides with what's given in the table above the graph (45°C @ 7.5W). This raise translates into 6C/W resistance with natural convection for this heatsink at this power dissipation (7.5W). Note however if you go to 10W in that graph, the raise (for nat conv) is about 55C, which gives a lower resistance of only 5.5C/W. Conversely, if you go down to 5W it's about 32C over ambient, so 6.4C/W. As it gets hotter it gets more efficient in natural convection. The moral of this story is that thermal resistance (C/W) is not constant; we had 20% decrease in thermal resistance here when we doubled the power. This variation is more significant with nat conv than with high levels of forced airflow, for which a single C/W value is a more reasonable approximation.

This "half-way rule" isn't quite a rule, but it seems to hold for heat sinks with tightly packed fins. For example, the M-C488 from a different datasheet (which also has a different geometry, more like the one in your calculator) has these values quoted:

The reason for this is that M-C488 has tightly packed fins, whereas M-C421 has a lot of space between them. So the latter benefits a lot less from high levels of airflow. 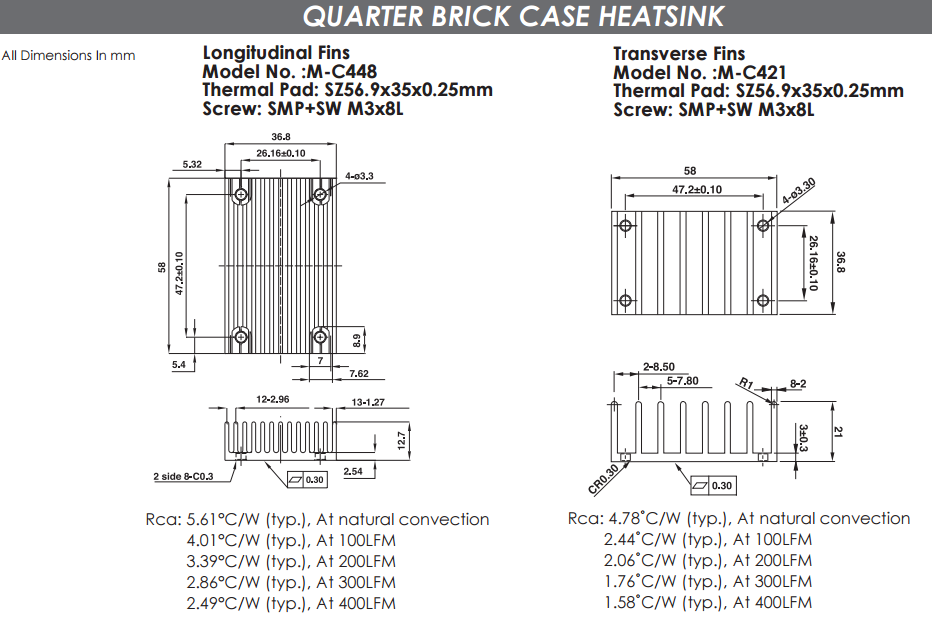 http://www.heatsinkcalculator.com/ will let you do natural convection as well (but it's not free) and so will most professional packages. It looks like there's a free one too at http://www.mhtl.uwaterloo.ca/NC_rect.html And they have a paper with the math behind the latter one. The hardest part about that academic calc is to put in the right thermal conductance for the contact surface. It has a huge effect on the result. I suppose the simpler commercially sponsored calculators incorporate some good default contact conductance based on the typical semiconductor package (perhaps they assume TO-220 or TO-3 if you can't input anything in that regard) and some ballpark surface roughness and contact pressure figures. Assuming nearly ideal contact conductance, I get about 2.66C/W (=50C/18.74W) for natural convection using your rectangular heatsink spec. Doesn't sound unreasonable given its size. 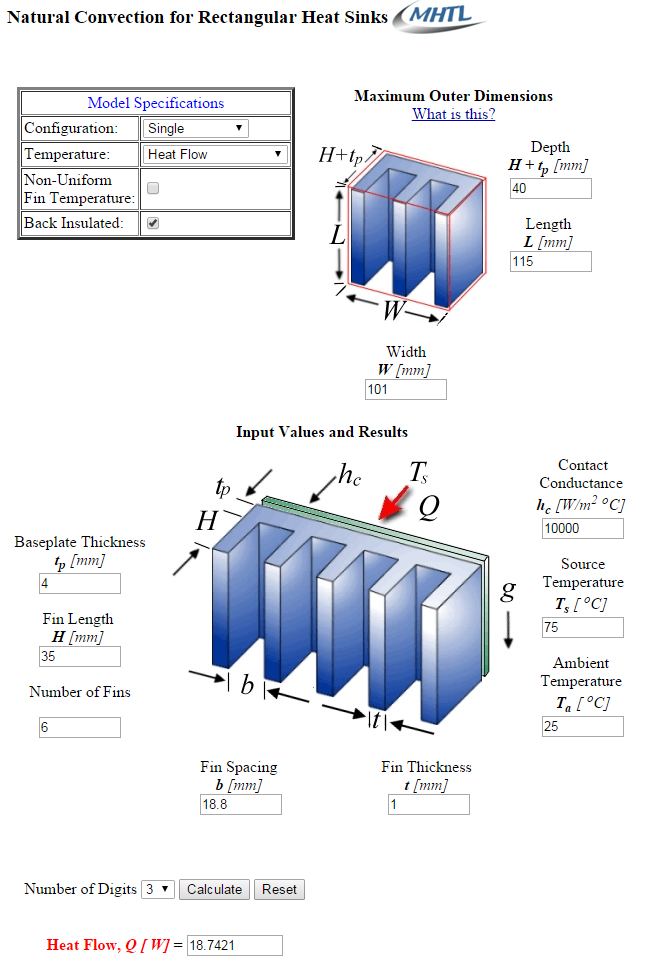 There's a more fully featured free calc at http://akemalhammar.fr/online/natconv_heatsink.html but you need to mess up with your Java settings to let it run (the guy can't afford a security certificate, it seems.) The result differs a bit from the above, but is in the same ballpark, around 2C/W. (It doesn't look like this one can simulate insulated backs, which is a more reasonable assumption. It only lets you insulate the two outer fins, which isn't the same thing.) I don't know the precise math behind this calc, but the guy who made it also give out a free book he wrote on thermal design. Anyway, this calc is nice in that you can see how C/W also varies with W. 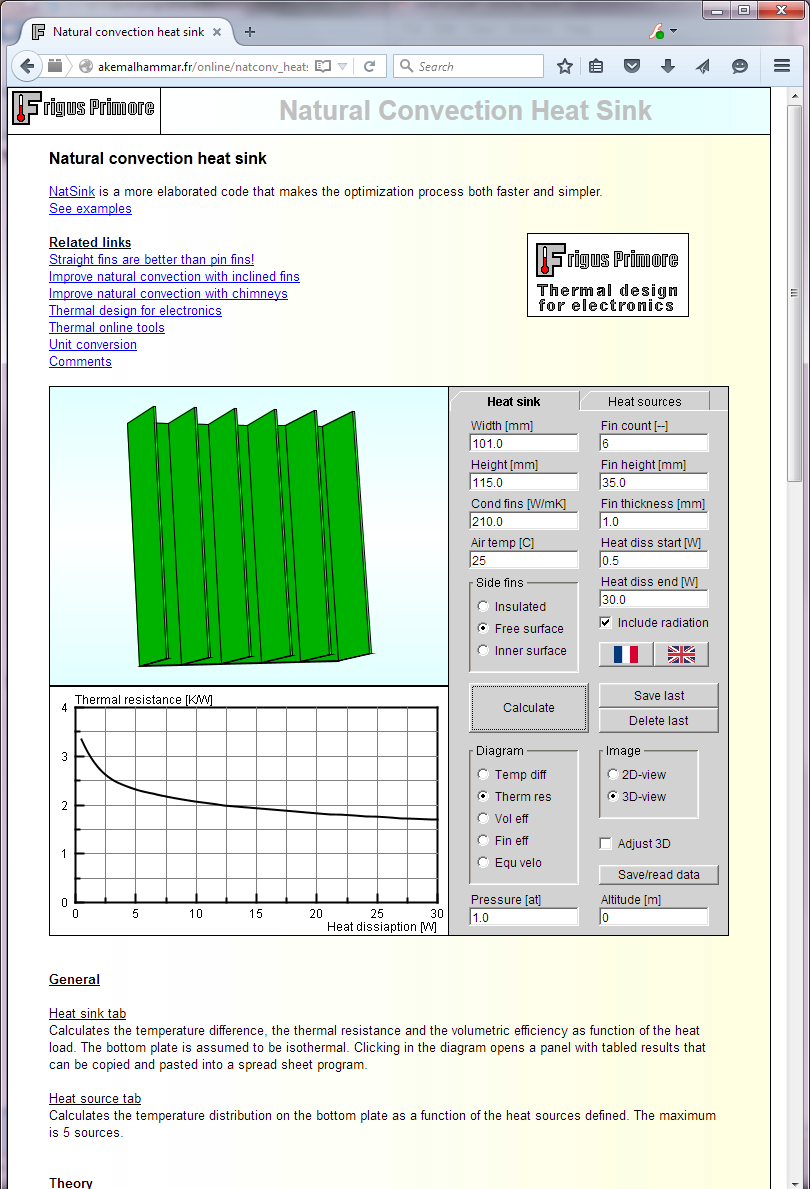 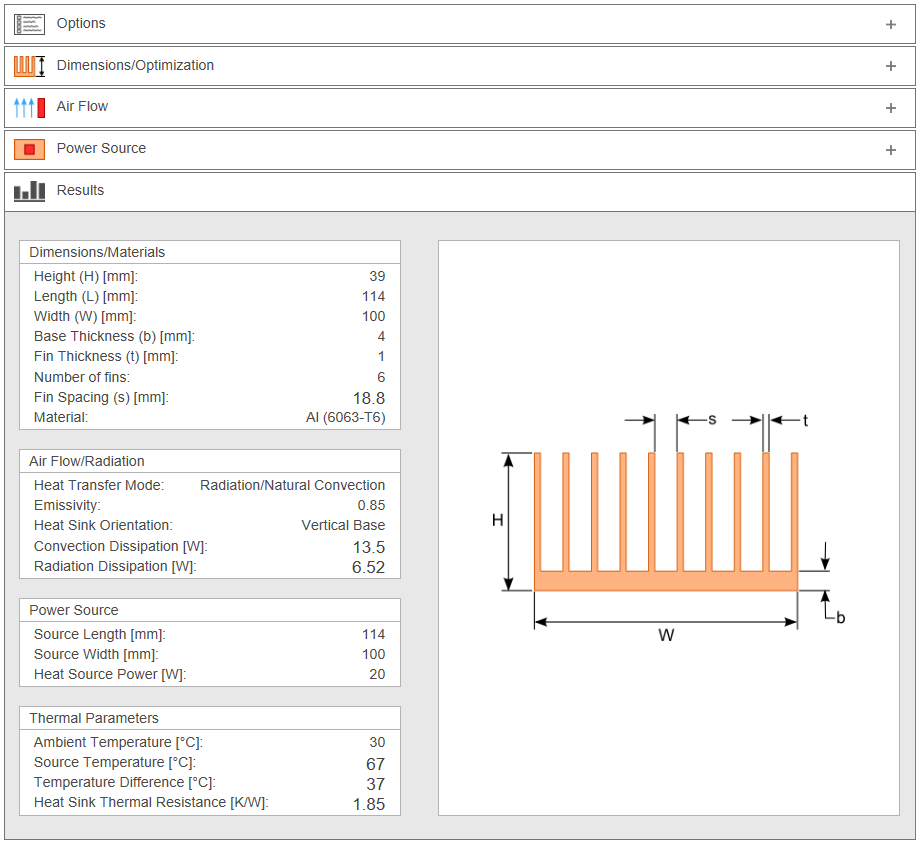