Build AND logic gate with 74'00 ICs (NAND) in negative logic

I am not sure how negative logic affects the Boolean algebra derivation and the gate schematics.

I know that if I want to derive AND with NAND in positive logic (using De Morgan), I'd do something like this:

Now I've read that in negative logic all AND's become OR's and 0 become 1. http://www.dsm.fordham.edu/~moniot/Classes/CompOrganization/boolean-outline/node11.html Does that mean the NAND acts like a NOR?

How would the algebra expression for AND using NAND looks like in negative logic?

Is that the way to build a AND from NAND in negative logic with gates (thats the way i would build it with NOR gates)?

In positive true logic, an AND can be described by "all ones make a one".

The same circuit, in negative true logic, can be described by "any zero makes a zero.", which is an OR.

So, a positive true AND is exactly equivalent to a negative true OR.

The difference between positive true and negative true logic is in their different symbologies and in the way logic circuits are thought about, used, and presented.

Take a look at the positive true AND symbol and you'll notice that its inputs, A and B terminate into a straight line and that its output, Y, comes out of a semicircle. The semicircle doesn't mean much of anything, but the straight line means that the output will only go true when both inputs (since neither is a bubble) are ones, which is when A \$ \style{color:red;font-size:100%}{AND}\$ B are both ones.

But what about when A and B aren't both ones,?

Then we have a situation where if one, or the other, or both of the inputs are low, the output will also be low, which is a logical OR when looked at from the point of view of lows on the inputs.

The symbol to the right of the positive true AND has a curvy input, which indicates "any", so if any of its inputs is low its output will be low as well.

So why should we muck about with this when its just as easy to use positive true logic symbology?

My favorite example is an RS NAND latch where the gates are depicted as positive true and yet need low-going signals to switch.

Befuddling to many a cadet, I think. 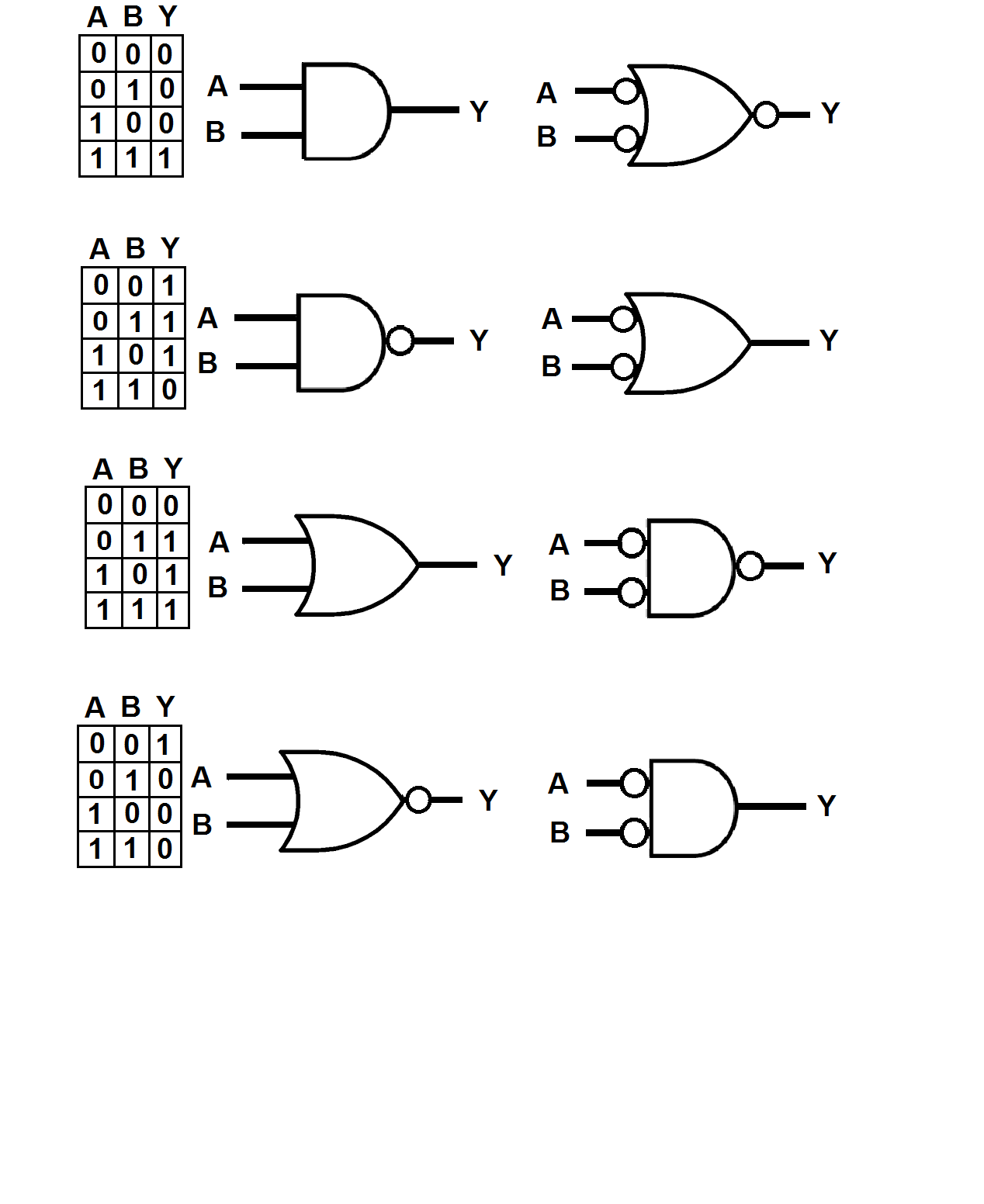 I am not sure I fully understand your question but you can easily build a AND gate by using 2 NAND gates, this can be shown as follows:

so the schematic becomes:

How would the algebra expression for AND using NAND looks like in negative logic?

Is that the way to build a AND from NAND in negative logic with gates?

2
Implementing a Boolean function using NOR gates
1
How to build a sequential logic circuit with transistors on a breadboard
2
NAND Gate Logic Optimization
0
Logic Gate, negative voltage
1
Rewriting a boolean expression only using NAND
0
Implement AND gate multiple ways (positive & negative logic)
0
Converting boolean function (dnf) to only 2-input NANDs
1
Process function to NAND and use only negative conjunction functions
0
Reading the Boolean Expression for a Logic NAND Gate
0
I've tried to make a JK flip flop, but can't get any of the outputs to ever change from 0