Is it normal to have a rats-nest of VCC/GND traces under an IC?

I'm attempting to route a simple board, the first I've done in 15 years since I routed a 12V linear power supply in the equivalent of mspaint. This board consists mainly of an LPC2387, which is an LQFP100 IC that requires a variety of +3.3V and GND connections.

As I play around with routing the traces for this thing, it strikes me that even with only GND routed, the underside of the IC is it's own little rat's nest of traces. Using this strategy, I'm going to need a giant pile of vias under there just to power the IC.

Is this normal? Am I going about this all wrong? 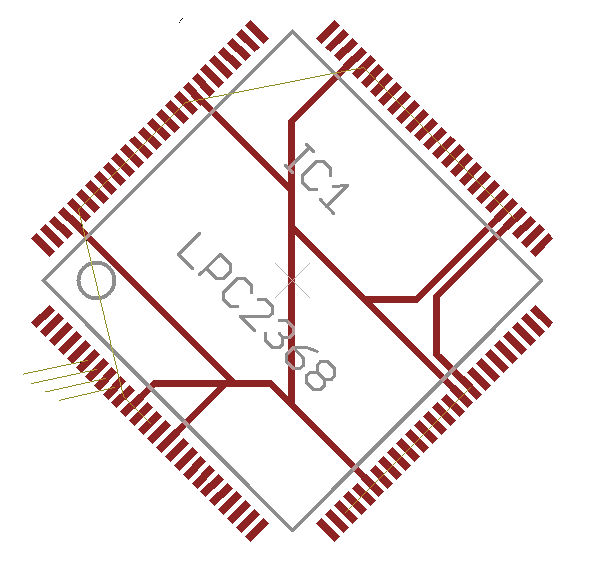 What you're missing is the use of a power plane. It appears you're using Eagle, use the polygon command to create a plane, and name it GND. Then, use the ratsnest command to pour this plane over your board.

For a 4-layer board, you should have an internal GND layer and an internal VDD layer. Route your signals on the outer layers, and pass vias through to the planes near the pads.

For a 2-layer board, the issue becomes more complicated. It's quite easy to set up loops (which are bad for signal integrity and EMI) when routing signals through a power layer.

The IOIO is an example of a 2-layer design with good routing. The bottom layer in this image is GND; I've edited this to use a 3.3V plane under the IC instead of their original traces. You can get the un-edited orignal documentation (including layout files) here. 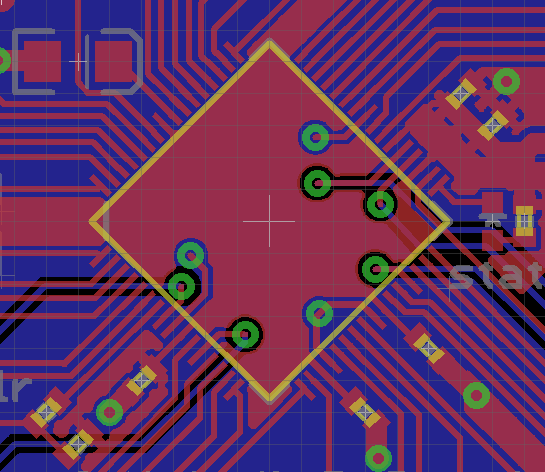 They placed the decoupling caps rather far away. Presumably, this was done so that all parts could be placed on the top layer. If you can solder on both sides it's probably better to locate them directly under the IC, and connect with short vias to the associated pins.

Also note that their voltage regulator and its associated 10uF decoupling cap are barely off-screenshot to the right. If they were any further, I'd also add a bulk cap of 10uF or so immediately under the IC, in addition to the 0603s shown.

Finally, note that even though there's a large, low-impedance plane under the IC, it's fed by two 8 mil traces under two pads at the right side. If I was being extra-careful, I'd have moved the LED and resistor at the right, as well as the 5V trace coming in across the right corner, to get a lower-impedance connection through that gap.

Connect them to the VCC/GND planes near the pins. Quieter power connections, more room to route the rest.

Not the answer you're looking for? Browse other questions tagged pcb pcb-design eagle routing or ask your own question.

24
Advice on going from rat's nest to routed PCB
2
PCB (Auto-)Routability
2
Creating a custom library part in EagleCAD and avoiding DRC Errors
4
RMII MAC side routing and signal integrity
3
Routing USB2 signals
0
Eagle: Autoroute only gnd and vcc net with using only vias
0
Can vias and traces conduct electricity on PCB surface?
0
How to deal with routing density issues near uController
6
What are the advantages and disadvantages of Manhattan-Style routing?