I am using a module which gives me an output of -24V. I need to convert this to +5V so it can be read by my NI Data Acquisition Device. What would be the easiest way, I was trying to use a P-channel MOSFET giving it the module output of -24V as Vgs and operating it with a +5V power supply. But it seems to get switched on at very small negative voltages, (my Vgs or Vin without receiving the module output is around -0.02V and this seems to be enough to switch on the P-mosfet). Are there better ways to do this..I would ideally not like to use an op-amp(inverting configuration) as I would need extra power supplies to operate one. (As of now I have two dc power supplies giving me -24V and +5V). Thanks!

Edit - I realised you might want from 0V to +5V for -24V to 0V, so here is another NPN based option that might do the trick, and also does not need the -24V rail. I left the FET based circuit there anyway in case it is of interest. As noted below you might have to fiddle with values a bit, this was just intended to put the idea across.
I wasn't entirely sure whether the signal is analog or digital, as you mention digital in the title, but also an acquisition device (so I thought it may be possibly heading for an ADC) so I assumed either was possible, hence the attempt at linearity. 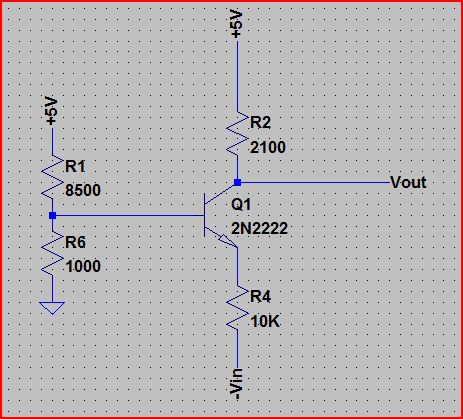 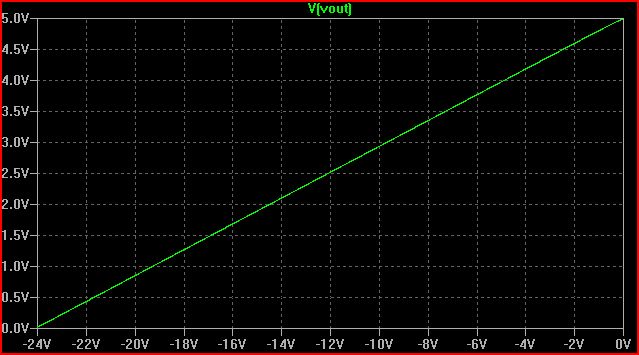 An N-channel FET source follower might work okay with a voltage divider on the input. Say something like a 10:1 divider for a range of -2.4V-0V at the gate. The source of the FET to 0V through a resistor and drain to +5V.
This won't be the most linear but shouldn't be too bad if you fiddle around with values a bit to adjust the desired ratios. You could maybe add a constant current source (e.g another N-channel FET with source to -24V through e.g a 5K resistor, gate tied to source and drain to source of upper FET) on the source to make it more linear if necessary.

Here is a circuit and simulation of the (more linear) constant current idea (the green line is +Vout as Vin is swept from -24V to 0V): 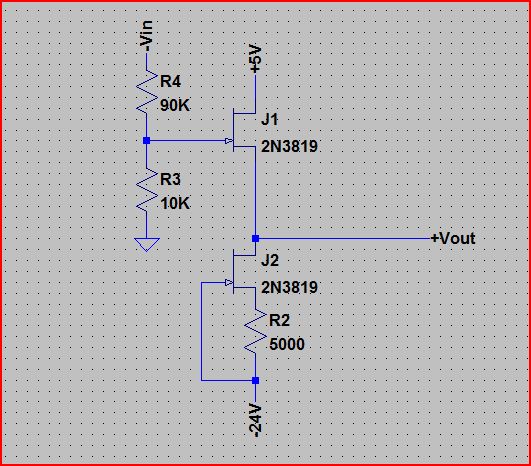 This assumes a 5V supply is available, which seems likely given the spec and requires a rail to rail output opamp - available from as little as US 18 cents in 1's.

Providing (0 to -24V) to (0 to +5V) conversion (inverted polarity compared to above) is only slightly more complex. Advise if that's what you want - although inversion in software would allow this basic 2 x R + IC solution to still be used.

Actual resistors selected to give as close to desired ration as required.

Non-inverting input to ground will ideally have a resistor equal to parallel combination of two resistors to compensate for input leakage current. (In above example = 24k//5k = 4.14k)

Not the answer you're looking for? Browse other questions tagged voltage digital-logic negative or ask your own question.

1
How to set a digital out to 24V Vcc
0
Creating -24V @ 750 mA from a Variable DC lab supply
1
How to convert voltage into digital signals?
1
Convert 0 to -150V DC to 0 to 3.3V
3
How to generate a -24V signal
0
how to convert the difference in voltages into a digital signal
3
Solution for accepting 3-24v as digital high for microcontroller
0
Delaying a TTL signal on the falling edge
1
I fried my Raspberry Pi while using L298N but I don't understand why