4017 counter: Why do some LEDs have multiple connections in this traffic light circuit?

Why are four legs connected to the green LED and two to the amber LED in the 4017 traffic light circuit? Shouldn't it be able to do with only one leg per LED?

Have a look at the LED truth table on the same page:

Each output is consecutively active for the same time. By wired-OR-ing outputs you can create longer active times. So the green LED will be on during 4 time units.
Normally you would have to wired-OR Q0 through Q4 for the red LED, but we have a carry output (here called ":10") which does just that, see the bottom trace of the timing diagram: 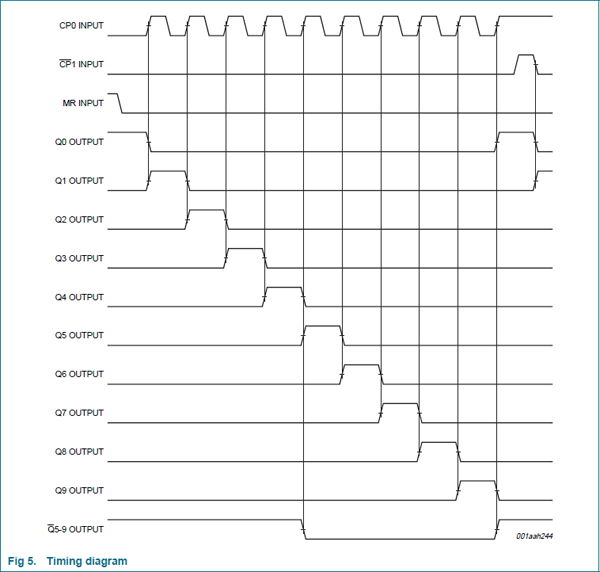 Not the answer you're looking for? Browse other questions tagged led counter or ask your own question.

4
Convert blinking (On/Off) power LED to fading
8
Miniature Traffic Light with Raspberry Pi: Wiring many LEDs
0
tricolor single package LEDs do not have same intensity for each color, why?
1
I have a PIXAXE-20X2 and want to connect 65 LEDs as outputs! Is it possible?
1
With a 555 + 4017, how do I light 7 LEDs, then 6, then 5... then 1 then 0?
5
How to replace a green LED with a red one in a simple transistor switch?
0
Mixed Colors LED project
2
led chaser with non-mechanical shut-off option
3
4017 IC block diagram