The vast majority of existing ancillary protection IC's available (such as Seiko) are not compatible with LiFePO4 chemistry due to the lower operating voltage. And the few vendors selling iron-phosphates often have a datasheet which is unclear about any built-in OVP/UVP circuitry. After contacting mine, the 18650's do not have internal protection, so must have it externally added. The vendor also does not have any solutions to recommend.

There are a metric ton of "BMS" and related cell and pack protectors on eBay, some claiming to work with LiFePO4. Which made me ask what these components were, and what I could use for my LiFePO4's...

Surprisingly, google knows very little about protection IC's for these batteries. After much searching and finding only lithium-ion protectors, I decided to look more closely at these "BMS" boards to try and determine which chips they were using. Most have some FETs on them, and a SOT-6 package labeled "3P20" or similar. I couldn't find any match to this part code, but I was able to get the manufacturer of the MOSFET from it's symbol, Alpha & Omega. So researching this company's products, they do have something like the AOC2806 which has a really low gate-drive voltage. Neat... so perhaps these are being used directly to "switch off" a cell when it's voltage goes below the gate threshold voltage of the FET? So I decided to simulate it. (Right-click and view in new page for higher resolution.) 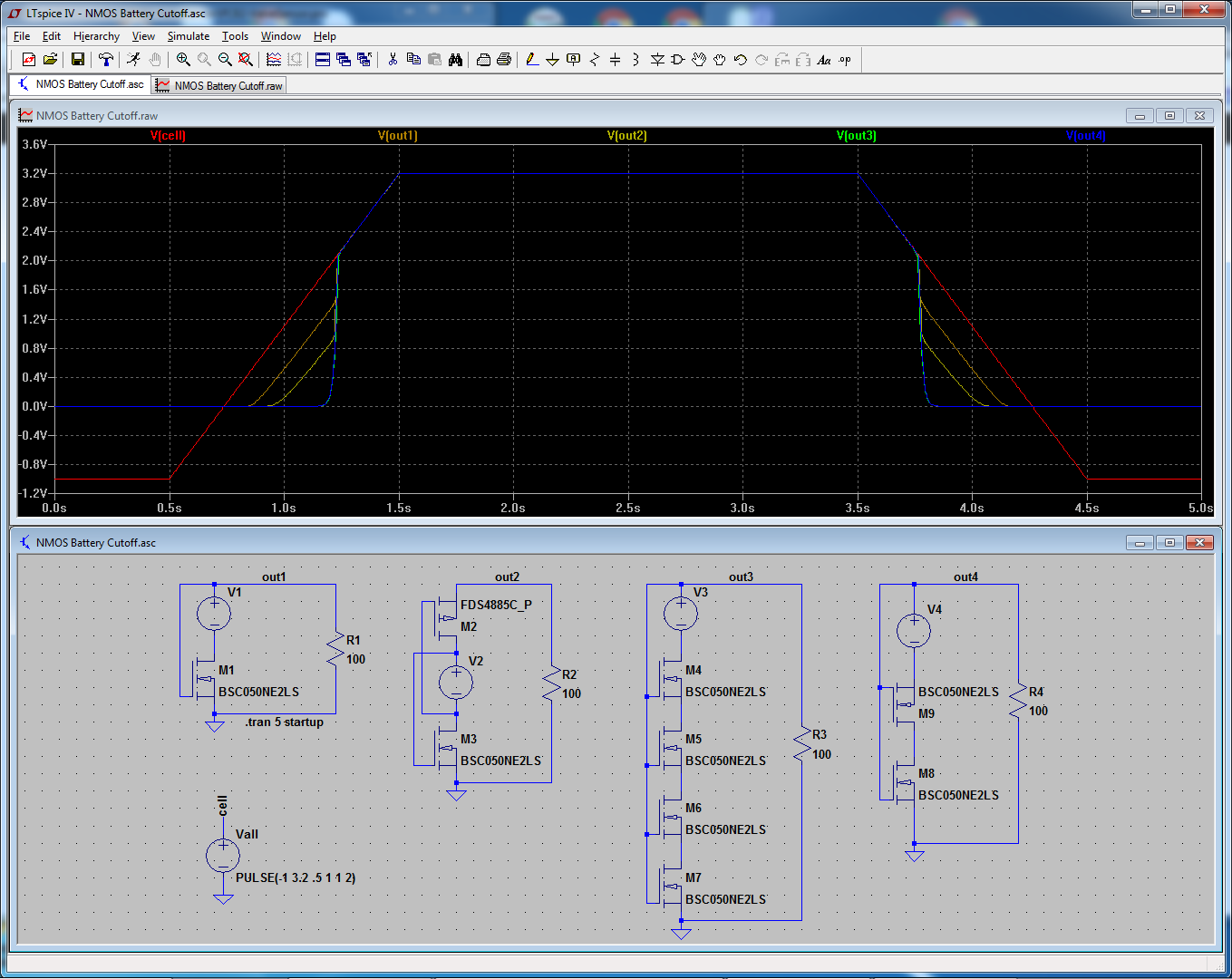 The red trace is an imaginary "cell" voltage, starting at -1v for half a second, then ramping up to 3.2v, staying there for 2s, then ramping down again. Orange trace is the voltage response into load of the left-most circuit, yellow the 2nd circuit, green the 3rd, and blue the 4th.

The ideal response would be a sharp cut-off at 2.00v to zero, but as can be seen, achieving this is easier said than done. I am also very dubious about the real-world accuracy of the green and blue traces. Even if it did perform like that in reality, it still would not work well, as high-impedance loads would still drain the battery beyond 2.00v (due to the curve at the bottom) down to about 1.6v.

So my question is... does anyone know of a LiFePO4 UVP device? Or can suggest refinements to my simulation, or any other solution whatsoever? The only requirement I have (and it's a doozie), is that the solution must use as little quiescent current as possible. (Another reason for exploring the MOSFET-only route: gate leakage below VgsON should be very very low.)

UV- and OV-limits do vary due to LiFePO4 chemistries (yes there are quite remarkable differences). If not sure what limits you need try by charging/discharging at realistic temperatures and measuring the dU/Ah (steep at beginning an end of SOC). Maybe you could make the (seiko) chips compatible with your (under)voltage level by adopting the measured voltage (between Vdd and Vss) so that the measured voltage is reduced ( that means protection level starts higher as needed with LFPs). Beware of changes of Idd and temperature dependent effects.

Not the answer you're looking for? Browse other questions tagged protection cell-battery lifepo4 or ask your own question.

7
Under Voltage Protection for LiPo Battery