Saturation regions for BJTs and MOSFETs

I almost got it why the saturation regions of BJTs and MOSFETs are in different regions of their diagrams. The differences were explained, but it remained unclear for me why the same name is used for two quite different analysis.

Other posts I found focused on one of the transistor types so it remained obscure for me: why the saturation region of the MOSFETs has this name?

Since we put the load line in the "flat region" of both graphs for amplifier design, it's strange to call it active in BJTs and saturation for the MOSFETs.

Edit: in the mean time I've found a nice footnote in another book (Foundations.. from Agarwal and Lang) which I reproduce here.

It's something like: I know, it's odd, live with it.

Like two answers below show very well: look at the internals, forget "inputs" and "outputs" and stick with the (quite different) physics of both devices.

why the saturation region of the MOSFETs has this name?

The post you link to does explain this, but in case it needs repeating and perhaps backing up with a textbook reference, the saturation region for a MOSFET is called so because the drain current saturates, i.e. basically stops increasing as Vds increases further.

You are correct that the active region of a BJT corresponds to the saturation region of a MOSFET when these devices are used as amplifiers.

The saturation region of a BJT (e.g. when turned on as a switch) corresponds to the triode/ohmic region of a MOSFET.

Some authors also call the saturation region of a MOSFET the "active mode", which does match the terminology used for BJTs. But they also call the triode/ohmic region the "linear mode" which perhaps doesn't help that much because "linear" suggests an amplifier rather than a switch. Linear here again refers to how the MOSFET characteristic looks like in that region rather than any external/use considerations. (Luckily, it seems nobody calls the BJT saturation region "linear mode".)

The only thing that's not confusing about this terminology is the cut-off region, which is the same for both. Here's a summary table for the correspondence (from an external/use viewpoint):

This summary also includes the reverse active region for BJTs, which is seldom used, but it doesn't include synonyms for the triode region; as I said "linear mode" or "ohmic region" are also used to denote the MOSFET triode region.

I think there are better diagrams about this subject for JFETs than MOSFETs but the mechanism is the same - the channel is starting to pinch-off i.e. if you increase drain voltage then the "usable" region in the channel for current gets thinner - this basically means that the current stays the same because although voltage has increased (and is potentially able to "push" more current into the channel), the channel has pinched off more thus opposing the potential for current to flow: -

You should be able to see that pinch-off occurs more around the drain than the source and this is because the voltage difference between drain and gate is bigger than the voltage between source and gate.

So that's my explanation of why the saturation region is so called in a FET - you can't push any more current through it unless the device breaks down (sad). I will try and find a diagram of what it looks like specifically in a MOSFET. Here's one that should help: - 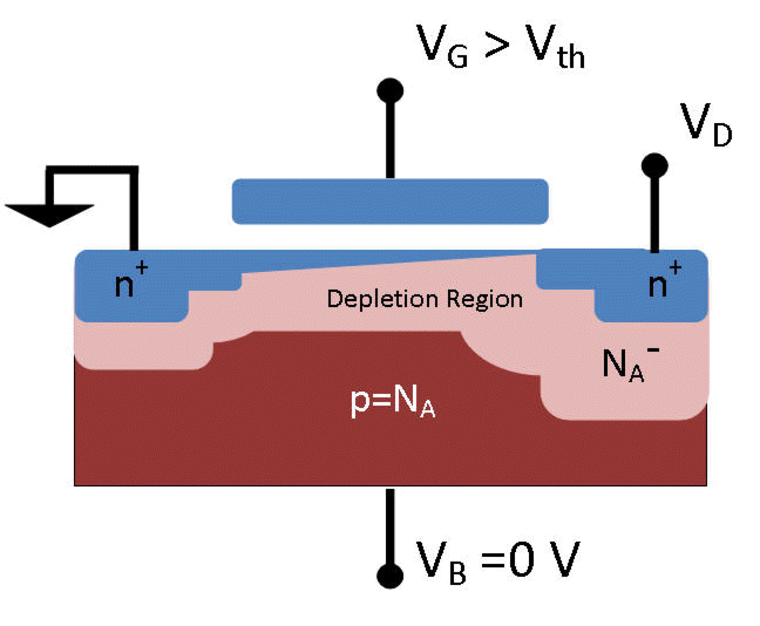 The blue area is the channel - note that the thickness of the channel (close to the source) is more than the thickness at the drain. This happens when the gate voltage exceeds the gate threshold voltage (\$V_{GS(THRESHOLD)}\$). Overcoming the threshold voltage is much easier around the source because the source is at a lower potential than the drain. Now it becomes the same story as the JFET - if the drain voltage rises then the pinch-off is more pronounced and current remains largely constant.

Normally, for an NPN transistor, the collector-base region is reverse biased as depicted in this diagram: -

Not the answer you're looking for? Browse other questions tagged mosfet amplifier bjt saturation or ask your own question.

3
Why is saturation region called so in BJT characteristics?
0
Current in Saturation and Active regions of BJT
2
Saturation voltage in MOSFET

7
MOSFETs or BJTs for using as switch for audio signals
1
What is the difference between MOSFETs and BJTs
1
Common emitter characteristics in the saturation region
0
Current in Saturation and Active regions of BJT
3
Terminology for BJT “regions of operation”
1
Saturation Cascade MOSFETS (Need Help from EE Experts)
0
BJT saturation question
0
Why is the variance of the beta value among BJTs much lower in the saturation region than in the forward active region?
0
Transistor - Saturation and Active Regions