How could this transistor be in saturation?

For this RTL circuit (RTL inverter with active pull-up): 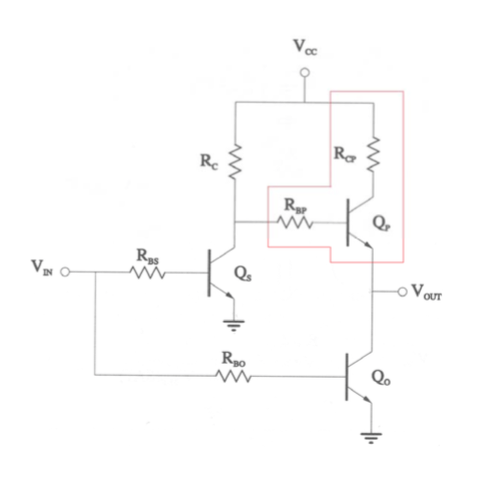 The textbook says that in the output high state, Qp is in saturation and the circuit looks like: 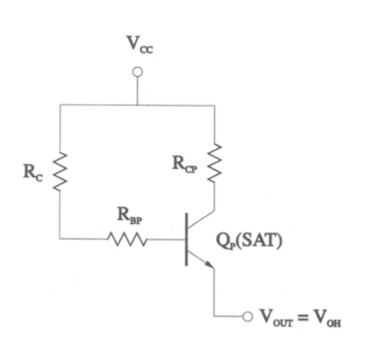 In the first schematic, only Qs is the (RTL) inverter, Qp and Qo are a classic (in the analog world) totem-pole and in fact the output stage looks a lot more like that of TTL.

If we consider what would be typical values [for TTL] for Rc+Rbp = 1.6K and Rcp = 130 ohm, then a high-quality (high-beta) transistor Qp will be saturated when the output is high. To see this, assume Vcc=5V and Vout = 4V. Then Ic of Qp will be at most 7.7mA (ignoring its Vce). And its Ib would be 0.3V/1.6k = 18.75uA. The resulting minimum beta for saturation is 41. So a transistor with beta of 100 will be [lightly] saturated (which is more often called soft saturation). This is what you want for high-speed switching. If the transistor is heavily (aka deeply) saturated it takes a long time to come out of it, so that's unsuitable for high-speed logic (but it's okay and actually desirable in other contexts like power BJTs, where you want to minimize Vce[sat] instead). By the way, the BJT soft saturation region is also called quasi-saturation. Here it is depicted in a textbook: 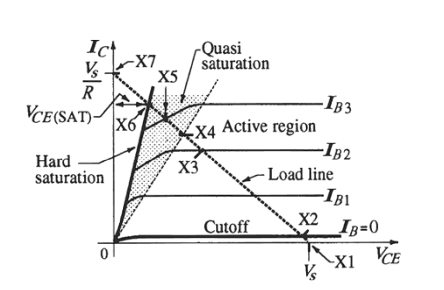 As you probably figured out, you can get any behavior from that circuit ranging from active mode to deep saturation, depending on the resistor values. If we decrease Rcp, it will go in the active region, if we increase it, it will become more [deeply] saturated. However, the calculations you have done here seem to ignore the fact that Vo needs to be high. Here's a simulation, with a 2N3904, which has a standard/model beta of 300, and in which we vary the collector resistor from 1 ohm to 201 ohms: 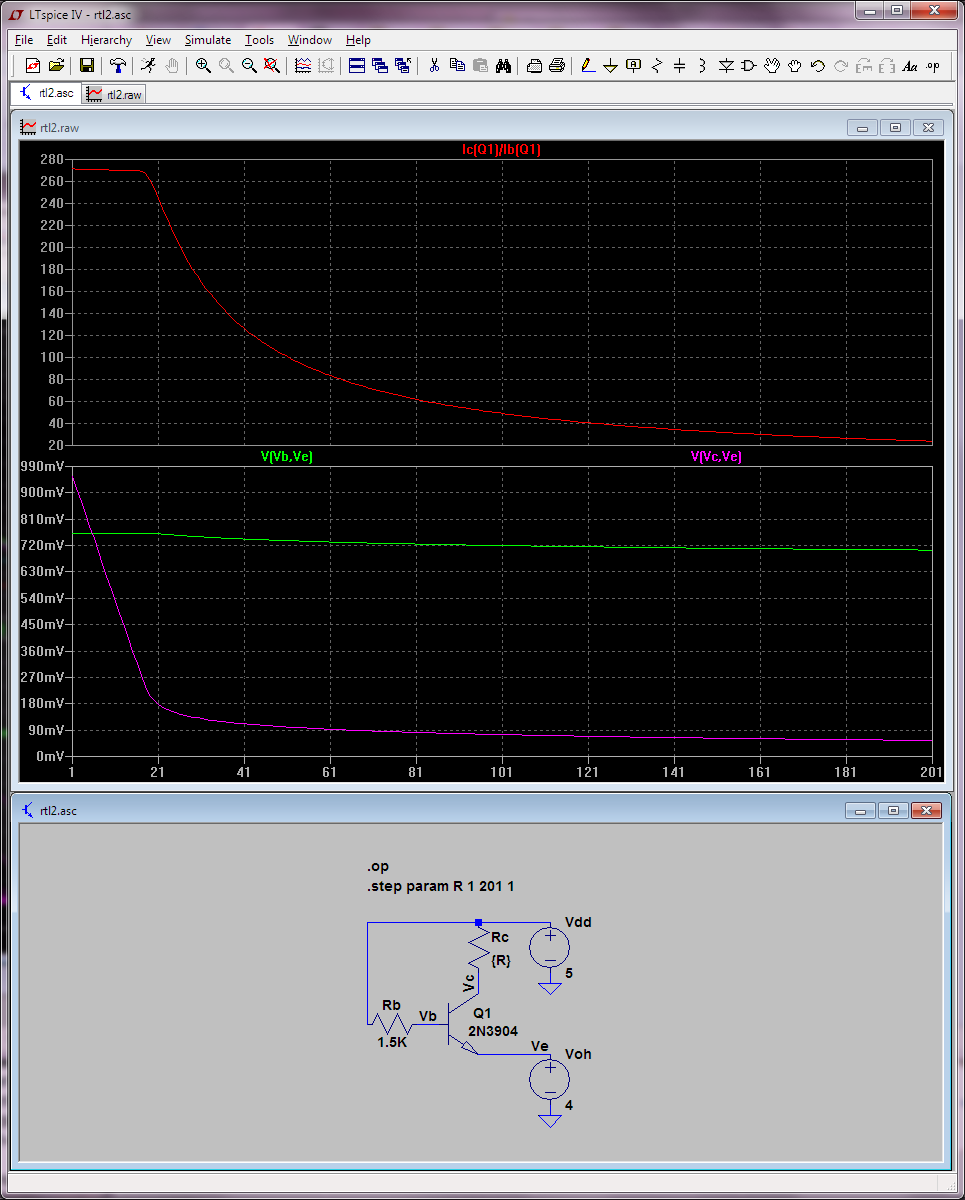 And here is what happens if we additionally vary the beta of the transistor from 25 to 300: a higher beta transistor saturates with a lower Rc. 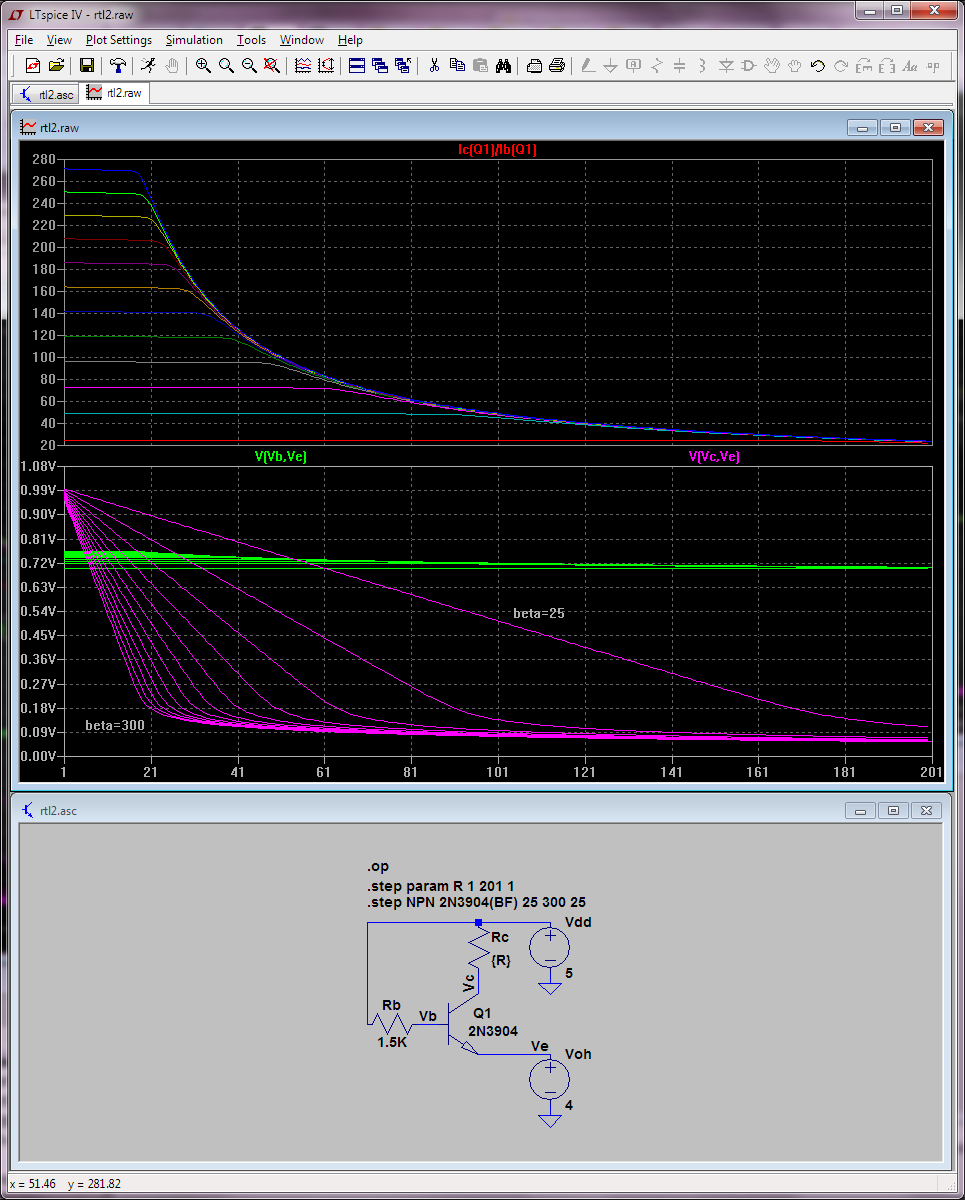 Finally, I have no idea what resistor assumptions are reasonable for the flavor of RTL that your textbook teaches. This totem-pole speedup (for RTL) is not something mentioned in Wikipedia's page on RTL, by the way. If you're curious about real RTL circuits, read for example the IBM manual linked on that page. (I personally am not interested enough in this topic to do that.)

Not the answer you're looking for? Browse other questions tagged digital-logic bjt inverter pullup or ask your own question.

1
How is this BJT in saturation?
2
BJT Saturation with small load/ H-bridge