I would like to track the angular position of a fairly slow motorized rotating arm (direct-drive; see illustration below) -- but require angular accuracy of under 0.05°, and similar resolution.

Is there any currently realizable sensor or electronic method that can attain this level of accuracy in rotational sensing without spending a fortune?

This is what I've tried so far, from simplest to intricate: 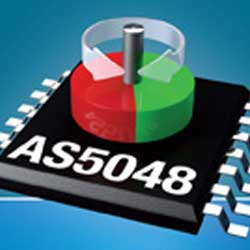 What you're doing is possible, but I don't see how you're going to do it cheaply.

.05 degrees (3 minutes of arc) implies a resolution of 7200 counts/rev, or the equivalent of 13 bits (8192). Worse, since you're trying to make a position loop, you'll need at least one extra bit of resolution, or a 14-bit system. The problem lies in the fact that your position loop cannot detect an error of less than one bit, so if the arm starts to drift the angle sensor won't detect it until the output is one bit off. The position loop will drive the arm back the other way, and will stop driving it when the error drops to zero. But this will let the arm swing the other way until it gets a count in the opposite direction, etc. So, for instance, if you want the arm to maintain a sensor count of 100, the system may well produce 100, 101, 100, 99, 100, etc.

I suggest that an optical encoder is your best bet, but a 14-bit (16,384 ppr) encoder will not be cheap. Another possibility is a resolver or synchro, with an RDC or SDC (resolver/digital converter or synchro/digital converter) as a second possibility, but this will cost even more. Synchros/resolvers have 2 drawbacks. First, they've been generally superseded by optical encoders so what you'll find on the market are mostly surplus units. Second, accuracy is not usually adequate. Size 23 resolvers are usually rated at about 5-10 minutes of arc, so you'll need a high-precision unit, and good luck on finding one.

Inductosyns will give you exceptional resolution and accuracy, but will cost even more than an optical encoder. Essentially, you need a high-speed RDC to read the output.

Your concern about optical encoder accuracy is based on a specific manufacturer's paper, but that is essentially a scare piece. The possibilities for error are the same for every manufacturer, and the linked manufacturer is not somehow better than other manufacturers. Generally, for precision encoders, accuracy is the same as resolution.

While it is possible to get optical encoders with parallel outputs, you're probably better off with an incremental encoder and rolling your own up/down counter. If you do go this route, you'll use the "home" signal to reset the position counter every time you turn the system on.

I think what OP suggest isn't a bad idea at all. What he wants to use is ready made ring: http://ams.com/eng/Products/Position-Sensors/Magnets/AS5000-MR10-128 , it has 128 poles = 64 pole pairs. The resolution is 16 bit=65536, max 305 rpm.
If you take apart a high resolution optical encoder you will find out that is almost impossible to align detector without special tools, indeed using this new method makes this very simple.
You would need a turning machine to make a proper fit for the ring and then place the sensor at close distance, no special aligning is required. The sensor itself comes in kit versions already soldered on breakout board, what you would need is an additional reference sensor - a gap with photodetector, then you can reference the encoder within one pole pair with combination of index output + ext ref sensor.

Since it's a brainstorming question, and WhatRoughBeast has already mentioned everything I would consider, why not add the harmonic drives to the list? In theory (I haven't checked with empirical estimates, or first calculations), it allows you to get 20:1 gearing ratio easily without any backlash (100:1 is common), bringing the number of required steps down to 720/rev. Might be something worth taking a look at. Harmonic drives are not cheap, but they are generally much cheaper than high resolution sensors especially for this gearing ratio.

If you need resolution on output shaft corresponding to 13-bit you need more extra bits, at least 1-bit for closed loop control is the must. Next problem is that manufacturers advertise resolution but does not advertise accuracy. You need ask persistently for accuracy. If the error is repeatable you can improve using software correction.

Another issue if you need heave-duty outdoor solution. If yes then magnetic encoder is an option. But magnetic encoder may have significant repeatable periodic error, which you need eliminate in calibration process using another optical extensive encoder. But you need a jig made even width higher precision.

You have to be able manufacture with desired accuracy, particulary concentricity. Also you need consider bandwidth as when you increase resolution then faster movement may exceed allowed bandwidth (e.g. frequency of quadrature output). In contrary ultra slow motion control is anothe discipline where one can find interesting unpublished issues.

If you need control arm rotation (not only track position) then resolution of direct drive and torque is issue. Dual loop helps with control but requires motor (encoder in case of gear box or counting steps in case of stepper) and shaft position sensing.

General advice is: if you want to finish project then use professional components which are pricey (e.g. Renishaw ATOM optical encoders). If you are playing for pleasure and time is not important then you can enjoy reinventing issues (cul-de-sac), discovering ungoogleable issues etc. Double check if you can manufacture apparatus with required precision.

How does an electronic caliper work?

They are similar to capacitive encoders (which you already saw in http://www.digikey.com/en/articles/techzone/2012/apr/a-designers-guide-to-encoders).

The electronic part of a linear digital caliper can probably be reused, so you'd only need to make a quarter disc with the correct pattern.

PS: The precision would even allow you to work with an off-the-shelf linear one.

Here is my new idea, yet, another step motor story :-)

Click on the the animated image to see undithered full res. Here you use the step motor as a travelling ruler. There is a magnet on the tip of main hand. The red lines shows the expected direction of magnetic flux. Assuming the step motor is like the one on the wikipedia. It has a 3.6 degrees of one full step. For a assumably linear portion of the field, you need 3.6/0.05=72 combinations of 7 bits. That means a 10-bit ADC of a ordinary MCU will do the job for a greater nonlinear range very well. Once you did the mechanism, analyze the approximity pattern and choose the most linear portion, with some software mapping lineearize it and choose the ruler borders for that particular setup.

The step motors are not perfect. According to wikipedia they may have up to 5% variance between teeth. To measure the error, you can extend the ruler's primary borders with secondary borders, which just needs to follow the gradient pattern of previous analyze of its neighbour border.

Also, you should better to drive the step motor with microstepping to avoid the +/- accelerations which may impact the setup scales, I think at least you must do half stepping. 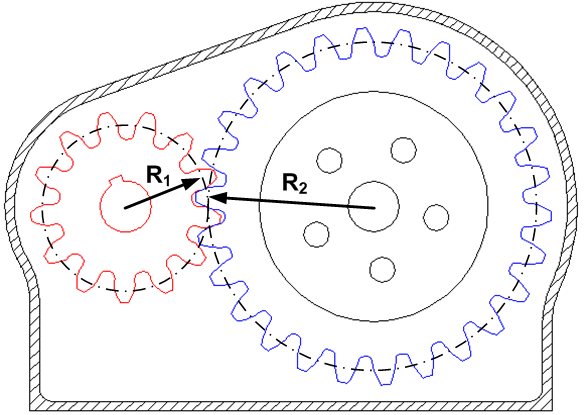 Rotating the big (R2) gear for an angle, the small gear (R1) rotates for an angle R2/R1 times bigger.

In your case, you can install a big gear on the axis of the arm and attach a smaller gear to it and then interface a coarser sensor to the small one.

Many other gearing methods are known and useful, start from wiki.

You should make a second mechanism on the edge of the hand, to split the center's steps by a linear mechanism like found in cd-rom driver's optical system. This way, it might be easier and sufficient to implement whole system as open-loop by also using a step motor on the center and drive it by microstepping to avoid very high acceleration magnitudes.

Physical limitations in the space around the moving arm might exclude this solution, but here you are - another cheap machine vision approach. The accuracy can be adjusted by changing the lens magnification. 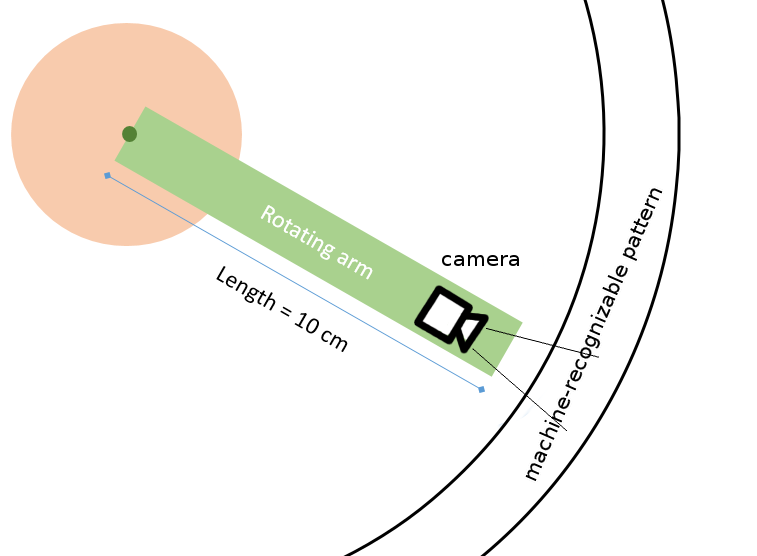 I don't know what you consider to be a fortune, but you might want to consider http://www.inductosyn.com/

Another very interesting option, if your arm regularly goes into an initial (rest) position, is to use an optical (gaming) mouse, or, more specifically, its sensing system.

Mount its sensor at the tip of your arm and provide a good (fine grain, non-reflective) background to slide over. Read-out the data over a standard usb mouse interface.

You'll need a simple sensor to calibrate the initial position. You'd have to experiment to see if this works well enough. It should work mostly regardless of dust and is simple to maintain.

Perhaps you can consider using a linear optical encoder at the end of your pivot arm, and use a flexible codestrip like this one, which has up to 2000 lines per inch. If you want to go super cheap, you could use a linear encoder like this one, but it only goes up to 150 lines per inch, so a resolution of 40 microns (since it's a quadrature encoder). If you are not sensitive to some jitter in the drive system, then you could use this straight up. Otherwise, you could extend the arm underneath your application, and put the code srip further out. You may even be able to print your own codestrip if you have a printer with a DPI of 1000 or more.

Not the answer you're looking for? Browse other questions tagged sensor motor magnetics encoder or ask your own question.

39
How does an electronic caliper work?