How is this BJT in saturation?

I simulated this circuit using Qucs: 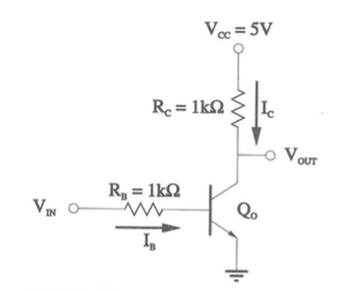 With Vin = 5V, VB = 0.746V and VC = 0.024V which means that the BJT is operating in the saturation region. But I don't understand why. Vcc = 5V and Vin = 5V. RB = RC = 1k ohm. So I expect that VB = VC and the base-collector junction is reverse biased which means that the BJT is in the forward-active region. What is the wrong with my analysis? and is there a "trick" that I can use to determine the mode of operation of a BJT?

To an experienced person, it is obvious at a glance that the transistor will be in heavy saturation.

Conceptually, an NPN configured this way (which is very common) goes into saturation as the base current increases. Roughly speaking (assuming base supply and collector supply are the same), when the RB/RC = beta, the transistor is somewhere near the beginning of saturation. As RB gets smaller, it goes more and more into saturation.

In this case, RB/RC = 1, so you know the transistor is in very heavy saturation. You can also see this by the very low drop from collector to emitter, which is another hallmark of saturation.

When a transistor is used as a saturated switch, the ratio of Ic to Ib is lower than the datasheet beta. The ratio of the actual currents is sometimes called the "forced beta." Typical values of "forced beta" are 10 to 20. When the base and collector drive are the same voltage, you can just use a 10:1 rule where the base resistor is 10x the collector resistor.

When the system is not that simple, you can roughly calculate forced beta by assuming realistic values for Vbe and Vce and estimating the currents.

I am trying to present you with an intuitive and practical framework rather than a textbook approach. Hopefully it will help.

Let's assume that the BJT is in the active regime and analyze it. Then we'll check our assumption and see what could cause it to be saturated.

Still assuming we're in the active regime, the current at the collector Ic = beta*Ib, which we can use to find the Vc. Vc = 5 - beta*4.3.

Since you've already established that the BJT is operating in saturation, either (1) or (2) must not be true. (1) is true by inspection, so I can only assume that the value of beta is too small.

Not the answer you're looking for? Browse other questions tagged digital-logic bjt saturation or ask your own question.

1
How could this transistor be in saturation?

1
Common emitter characteristics in the saturation region
0
Reverse saturation current of BJT?
2
Bipolar transistor as a switch
1
Why does the collector current direction remain the same in saturation and active region?
2
Terminology for BJT “regions of operation”
0
Active region in BJT in a Common emitter configuration
3
NPN Circuit simulation doesn't agree with book
0
How is the Collector-Base region reverse biased in Common Collector configuration of BJT?