Correcting for non-linear brightness in LEDs when using PWM

Can anyone suggest a rule of thumb to use as a correction factor, or other workaround?

For 16 levels it's easy to do a simple look-up table "by hand" and convert the 4 bit value in an 8 bit value to pass to PWM controller: this is the component i've used in my FPGA led array driver. For an 8 bit level controller, you'll need at least 11-12 bit output from the look-up table.

In theory it should be exponential, but I've got best results for fading by using a quadratic function.

I've been looking in to this subject over the last few days as I have the same problem... trying to dim LEDs using PWM in a visibly linear way, but I want full 256 step resolution. Trying to guess 256 numbers to manually create a curve is not an easy task!

I'm not an expert mathematician, but I know enough to generate some basic curves by combining a few functions and formulas without really knowing how they work. I find that using a spreadsheet (I used Excel) you can play around with a set of numbers from 0 to 255, put a few formulas in the next cell, and graph them.

I'm using pic assembler to do the fading, and so you can even get the spreadsheet to generate the assembler code with a formula (="retlw 0x" & DEC2HEX(A2)). This makes it very quick and easy to try out a new curve.

After a bit of playing around with LOG and SIN functions, the average of the two, and a few other things, I couldn't really get the right curve. What is happening is that the middle part of the fade was happening slower than the lower and higher levels. Also, if a fade-up is immediately followed by a fade-down there was a sharp noticeable spike in the intensity. What is needed (in my opinion) is an S curve.

A quick search on Wikipedia came up with the formula needed for an S curve. I plugged this into my spreadsheet, and made a few adjustments to make it multiply across my range of values, and came up with this: 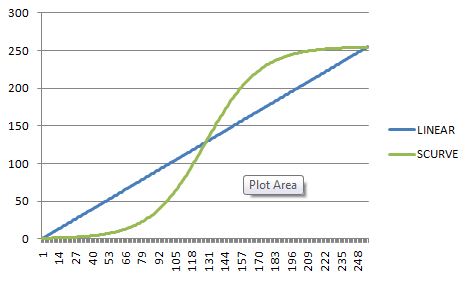 I tested it on my rig, and it worked beautifully.

The Excel formula I used was this:

I have no idea if this is mathematically correct or not, but it produces the desired results.

Here are the full set of 256 levels that I used:

I was using an ATtiny for lighting my deck. Brightness is controlled using a pot connected to ADC pin.

Tried exponential function and the PWM output based on that seems to be giving linear increase in perceived brightness.

I was using this formulae:

Attiny85 @8MHz was taking about 210us to perform the above calculation. To improve the performance, made a lookup table. Since input was from 10-bit ADC and ATtiny memory is limited, I wanted to create a shorter table as well.

Instead of making lookup table with 1024 entries, made a reverse lookup table with 256 entries (512 bytes) in program memory (PGMEM). A function was written to perform binary search on that table. This method takes only 28uS for each lookup. If I use a direct lookup table, it would require 2kb memory, but lookup would take only 4uS or so.

Calculated values in lookup table uses input range 32-991 only, discarding lower/upper range of ADC, in case there is problem with circuit.

Below is what I have now.

I found this guy who uses a method he calls "Anti-Log Drive". Here is the direct download link for his info.

This PDF explains the curve needed, apparently a logarithmic one. If you have a linear dimmer (your PWM value) then the function should be logarithmic.

Here you can find a lookup table for 32 steps of brightness for 8 bit PWM.

Here is what I have done based on that arduino forum response. I have computed the values from 0 to 255 so it's easy to use with pwm on arduino

Then to use on Arduino just do like that :

Hope it is helpfull for some people ;)

I'm dealing with this now, and I'm taking a slightly different approach. I want 256 levels of brightness, but mapping a linear 0-255 range to a non-linear 0-255 range winds up, as you can see in some of the other answers, with a lot of duplicate entries. (I.e., several of your input values result in the same brightness level.)

Here's the C program I used to generate my lookup table:

And here's the table:

For me this law seem to work pretty good: http://www.pyroelectro.com/tutorials/fading_led_pwm/theory2.html

Ok so I just had to deal with this. According to this link, while the emitted light is linear with the increase in PWM duty cycle, our perception of it is not linear, but logarithmic.

We can transform it to be perceived as linear by applying an exponential function to it. With a python example:

where v ranges between 0-1.

This should be easy to translate to any other language (ChangeDutyCycle expects values between 0-100, so scale accordingly).

Some times ago, I designed a PWM controller for a LED strip. In first tests, I verified that perceived brightness was not linear with the PWM duty cycle. For example, with 50% d.c. PWM, the perceived brightness was much more than the 50% of its maximum value with 100% d.c. PWM. In fact, human eye perceives light intensity in a logarithmic way, because only in this way it can adapt to strong variations like sun-light and shadow.

You can assume the following relation:

To solve that problem, you can build up a LUT to convert desired brightness into PWM values. With the desired perceived brightness L in the range 0-1, you should get good results with this empirical formula:

The time step linearly decreasing as the brightness increases with a constant step, results in the brightness level exponentially increasing in time.

0
PWM + LC filter - voltage value non linear with duty cycle
1
Control LEDS with PWM and transistors
1
Chip with one oscillator provide different brightness (PWM) for multiple LEDs?
9
Can bright LEDs cause eye damage even if they are dimmed with PWM?
2
Transistor not cutting off at 0V
4
Resistor Selection to retain same brightness in LED PWM circuit
0
Effect of changing PWM frequency of a light source on perceived brightness
0
Driving two parallel LEDs with PWM brightness control and an "LED selection" signal
3
Exponential ramp for PWM