Whenever I read about the distinction between digital and analog signals, a graphic like this (or similar to this) is usually attached: 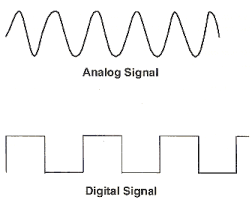 Consider the bottom illustration for a moment (Digital Signal). To my best understanding, electrical current is continuous, so if that is the case, there is no way it will flow in such a manner in any medium. In other words: there are no "square waves".
So what exactly does that depict?
Is it just interpretation, whenever the voltage passes some barrier or falls under it? Meaning, when the voltage is above some arbitrarily chosen threshold we consider it as "high" but otherwise we consider it "low"?

Please, I know this is not always possible, but try to answer in a way that a layman would understand.

Basically, from an electrical viewpoint, every "digital" signal is as you say, only an approximation of a square wave. In particular it will have finite rise and fall times.

At high speeds, it can be difficult to ensure it looks as nice as the theory wants. To ensure that the signal is still detected as digital (i.e. the receiver doesn't get utterly confused by a horribly shaped signal), the so-called eye diagram (aka eye pattern) is used to measure its characteristics over a number of samples. 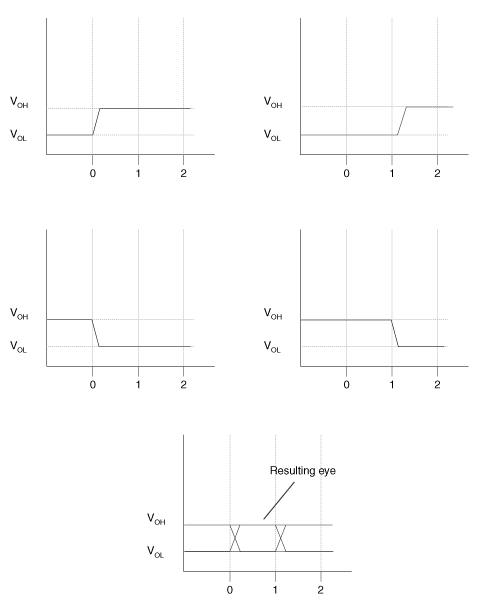 Many standards (e.g. USB and what not) define some acceptable characteristics for this diagram. 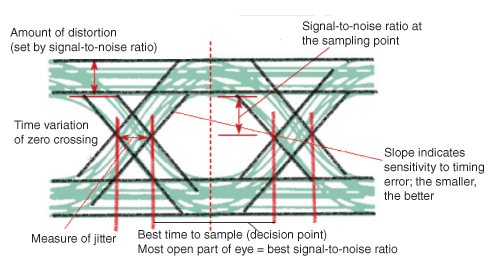 Note that an eye pattern/diagram isn't restricted to just two [voltage] levels. It's also applicable when you have any number of discrete output levels. For example, Gigabit Ethernet over twisted pairs (1000BASE-T) uses not two but 5 different voltage levels.

Basically, yes, that's how it works, some voltage thresholds for what is "1" and what is "0" are decided by a some standard.

Digital signals are binary. They have only two states - on or off, high or low, up or down - whatever you want to call them. As you have deduced, there is some threshold above which the value is deemed to be high and another threshold below which the value is deemed to be low. Digital is very simple to do with transistors by either turning them fully on or fully off.

Analog signals are analogous to the quantity they are measuring. e.g., a weighing scales might give out a voltage proportional to the load - say 0 to 10 V for a 0 to 200 kg load. Another example is the signal from a microphone which varies with the sound pressure affecting the microphone diaphragm. In this case the frequency will vary with the pitch of the sound and the amplitude will vary with the loudness.

Somehow you've picked up a little confusion; let me see if I can help.

When it comes to "digital signals" there is more than one level at which that term applies. It seems you get the idea of analog signals - a continuous value that changes over time.

Now what I've just described is an abstraction; a digital signal can be conveyed by waving semaphore flags if someone so chose. But if instead we choose to represent a digital signal via a set of electrical signals arranged one conductor per bit in parallel, then each of those signals is indeed an analog signal as others here were suggesting. It's the job of the electronics, then, to generate those signals and receive/decode them accordingly.

Also, you can transmit digital signals serially instead of in parallel by sending each bit of each value in sequence; you can do this over a single conductor instead of however many bits' worth you're using and as has also been said here, there are schemes that are more complex than using just one "high" voltage or current to signify "1" or "true" and a "low" or zero voltage or current to signify "0" or "false."

And you are correct - an analog signal can never have an instantaneous change; the reasons for this are many and I won't go into them all here save one: changes in current in a conductor always resist themselves (that follows right from Faraday's equations). But in practice when designing digital circuits the idea is to have the transition between states be short enough relative to the length of the smallest interval between transitions that it doesn't matter. That assumption begins to fail when you use too long of an Ethernet cable, for instance.

Consider this picture from BBC: 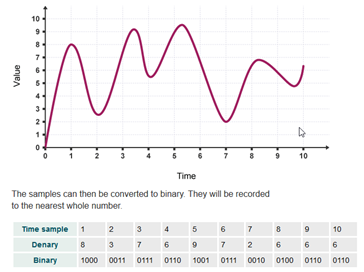 The above graph is the analog form. From that, a value is taken each second (but this can go up to 40mio. times a second and much much more). This value is the amplitude height of the analog signal.

Lets call it "step" when we take the value.

In each step, the height of the amplitude is recorded. The height is a number, which can be represented as 0 and 1 (for instance 10 would be 1010).

You see, the more values we measure each second, the more data has to be saved/transmitted and the more accurate the resulting digital format of this analog signal will be.

Also, the higher the value can be, the more accurate the resulting digital format will be too. (for instance when we take values from 0 to 10, there are only 10 values - not very accurate. When we would remodulate this digital signal into an analog one, the curve wouldn't be very "good". But when we take values from 0 to 16000, this will be a lot more accurate.) Also more bits have to be saved here each step.

There are many ways to convey a digital signal. For example by "changing voltage" which is called "Amplitude Modulation", which is shown in you graph (but of course its NEVER a perfect square!). Amplitude Modulation just means that you singal that there is a 1 by a high amplitude (high voltage) and a 0 by a low one.

There are oder modulation techniques like Frequence Modulation (FM which is used with radios - you indicate a 1 with a high frequency and a 0 with a low one) or Pulse Amplitude Modulation which is used in Ethernet and many many more!

Not the answer you're looking for? Browse other questions tagged digital-logic analog signal or ask your own question.