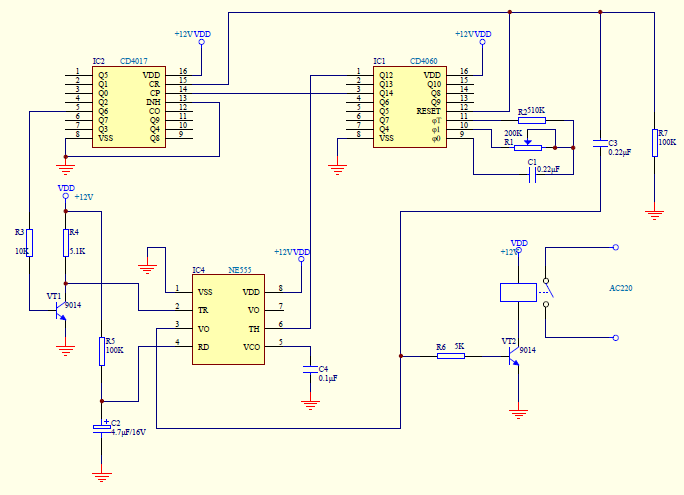 So far I have got the circuit working but cannot understand how to fine tune the resistor/capacitor combination to achieve the time..

I want the 12 minutes to be within the 48 hours.. so the relay will begin at the same time every 2 days..

Here's one that's all digital, needs no tuning, and runs on any 1 second clock oscillator.

C1R1 is a differentiator, and as V2 first comes up, a narrow positive-going spike (MR) will be generated across R1. It's used to make sure that when power comes up, U1,U2,U5 and the R-S latch comprising U6A and U6B are all in known states, with all the counter outputs reset to zero and the latch set, which will turn K1 ON. Then, when the next clock comes along, the 12 minute counter (U5) and the 48 hour counter (U1 and U2) will both start counting up, simultaneouslhy with V1 being the 1Hz clock source.

When the 12 minute counter gets to 720 (the number of seconds in 12 minutes) U1A,B,and C will decode that state and send a pulse to U5B which will RESET the latch and turn the relay OFF. At the same time, U6A's output will send a high to U4B which will force the counter into reset and hold it there until the 48 hour counter counts to 172800, the number of seconds in 48 hours.

When the counter gets there, U3A,B,C, and D will decode that state and send a high to the counter's RESET pins, forcing all of its outputs low and starting a new 48 hour counting cycle. The pulse is also sent to the latch, which it SETS, turning the relay ON and releasing the RESET on the 12 minute counter, starting the new 12 minute cycle anew and in sync with the 48 hour counter.

Since 12 minutes is 720 seconds and U5 is a binary up-counter, once its outputs have been cleared and it's allowed to count, when it accumulates 720 one-second clock pulses its outputs will look like:

With the MSB leftmost.

In order to detect/decode that unique state, and use it to our advantage, all we need to do is to AND all of the counter outputs which are ONES when the count reaches 720, and use the output of that decoder to get done what needs to be done before the next clock comes along. Not a big deal with a 1 second clock.

The logic for the 48 hour clock is similar, but when it counts up to 172800 seconds, its outputs will look like this:

So the The 48 hour decoder's output will then go true when the five output ONEs are ANDed and used as a trigger.

If you're interested in the circuit, Here are the files you'll need to run a simulation, using LTspice, if you're so inclined...

If you are, just download all of the files into the same folder and left click on either of the .asc files. If you've got LTspice installed on your machine it should find the file and bring up the schematic. If you don't, it's available, free, at http://www.linear.com/designtools/software/

As an aside, the "test" schematic is identical to the main one, with the exception that the decoders have been removed so that a few cycles can be run to check the logic without having to wait forever for a solution. 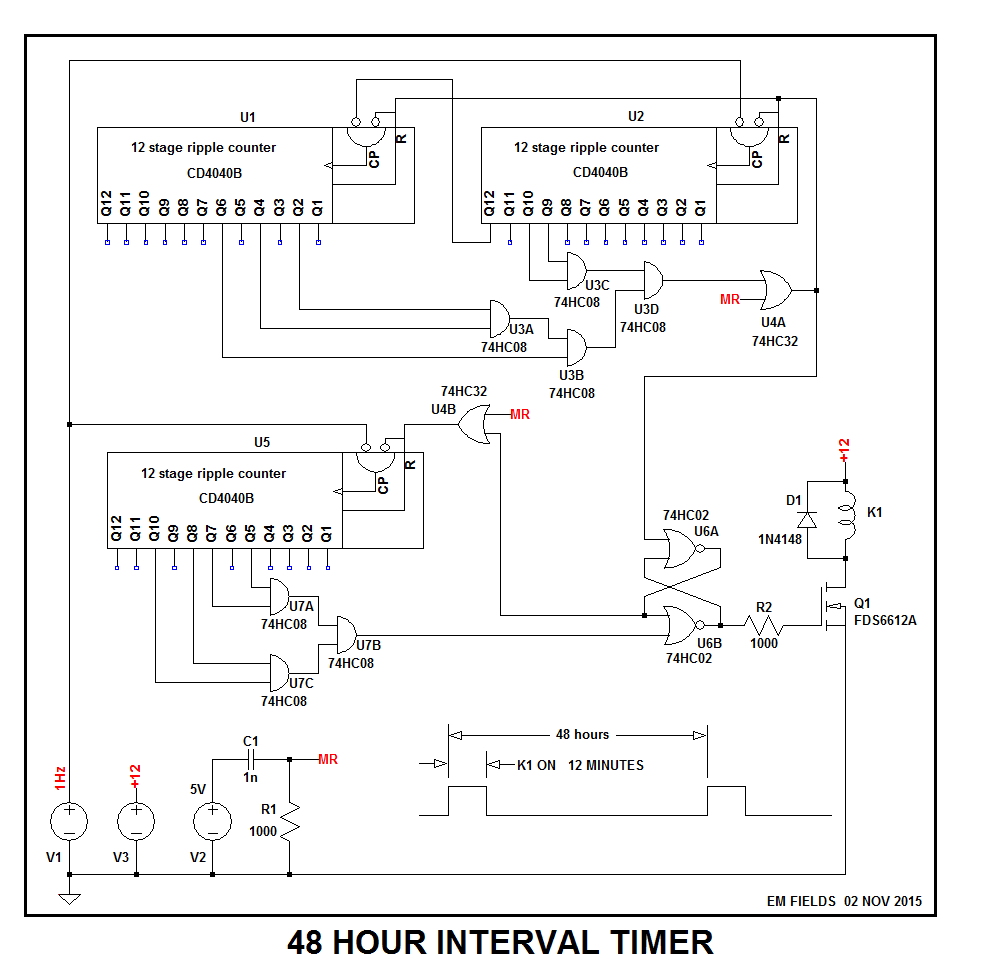 In addition to needlessly complicating your circuit, you've got the timing wrong. There is no need to use the reset lines, and no need to buffer/invert the trigger line to the 555. Plus, trying to use a 555 to produce a 12 minute pulse is pretty much doomed to failure.

If you want to do this, the approach to setting timing would be to monitor the Q4 output, and adjust for a period of 56.25 seconds (+/- 0.28 seconds). While this would be tedious in the extreme, it will allow setting the period in less than, say, an hour. However, adjusting a single-turn pot to 0.5 % will be a challenge.

Not the answer you're looking for? Browse other questions tagged timer 555 or ask your own question.