Has fsk over wired communication channels ever been done?

I have done multiple searches to figure out if fsk encoding of binary data has ever been used in a "wired" communication scheme but have come up with very little.

It seems, at least to me, that utilizing multiple, thin frequency bands to encode essentially parallel pieces of information, cabled internet links could dramatically increase their bandwidth.

Does anyone know if research related to this has been done?

Yes, this is how V21 low-speed modems work. Here's a good short description and example implementation from TI.

It seems, at least to me, that utilizing multiple, thin frequency bands to encode essentially parallel pieces of information, cabled internet links could dramatically increase their bandwidth. 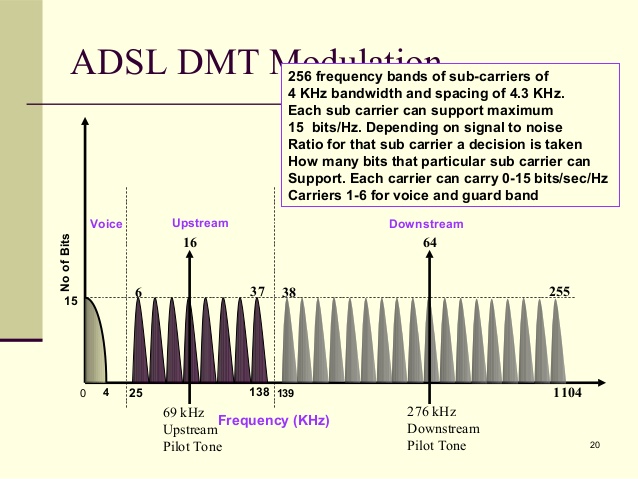 A form of FSK called phase−coherent Frequency Shift Keying was used in the mostly defunct IEEE 802.4, aka token bus. There were actually several flavors of token bus:

In the phase-coherent form the frequency transitions are made only at zero-crossings, but I'm not sure what the additional titbid that "the two singalling frequencies are integrally related to the data rate" means. You can probably read US patent 4799239 and figure that out.

Also, what you are asking about in your second paragraph is not just FSK (as used in the ancient modems) but MFSK, also called M-ary FSK. I suppose one could use this to code multiple bits, like [say] Gigabit Ethernet does with its 5 voltage levels over twisted pairs [1000BASE-T]. Given the general death of FSK over cables though, I'm not sure this was ever done [in commercial products]. Google Scholar is your friend for finding more or less obscure academic attempts at practical products and theoretical background on it.

I don't remember exactly what caused the demise of FSK in modems (and transition to PSK etc. after the 2400 baud ones), but a certain cheekily titled paper notes with respect to the [wireless] 802.11 protocol that:

FSK was abandoned in favor of QAM when the 802.11 standards committee deemed it impossible to implement in 1997. This was mainly due to the limitations of the technology available at the time, one of which is the poor tracking bandwidth of the traditional Phase Locked Loop (PLL). The second issue was due to the numerous noise sources associated with down conversion (dominant channel noises).

So you may need more expensive electronics for high-speed MFSK.

Also from this textbook

Binary and M-ary FSK have the poorest bandwidth efficiency of all the digital modulation techniques used.

Efficiency is on the horizontal axis in the following graph (from the same book); the vertical axis there is the power required to get a BER of 10^-4. So, on the plus side, FSK is thrifty in terms of transmitter energy/power requirements. 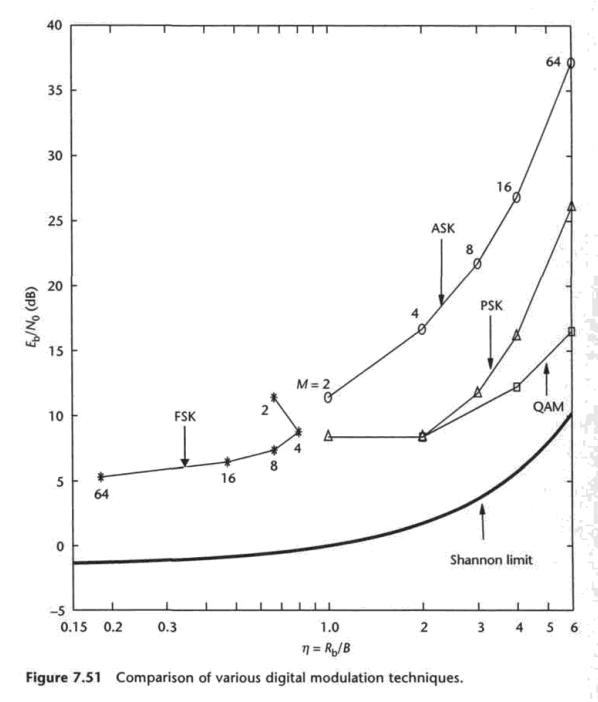 After reading Andy's answer, I realize that you may have been thinking just in broad terms of using sub-carriers, i.e. frequency division multiplexing in your 2nd paragraph. But [M]FSK is not one of those schemes.

In the 80's there were a technology called FMVFT which used FSK modulation over a telephone channel. Baudrates of 50bps or 200bps are standardised in ITU-T R.35 and R.38.

No more than 4 years ago I implemented these protocols on an FPGA board for the revamping of a railway diagnostic equipment. So I can say they are still used...

Anyway, to answer your second question, you can be sure that every single Hz that a wire can transport has been exploited to increase the bandwidth of the channel. You cannot FSK modulate two DSL signals over a twisted wire, just because the DSL signal is yet using all of the available bandwidth of that wire (well maybe you can still improve something... but not using FSK).

Not the answer you're looking for? Browse other questions tagged communication binary fsk encoding or ask your own question.