Maybe someone can help with this. I need an active filter with a very low cutoff frequency (~2 Hz). I think to make it with aluminium electrolitic capacitors. Is there any draw back? The signal to be filtered varies from 0 V to 3 V. Here is the circuit: 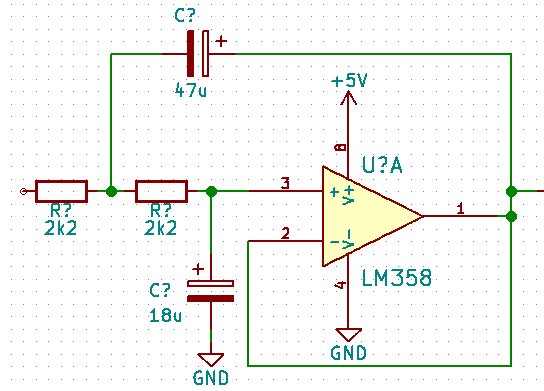 Is there any problem with this conection? The simulation runs OK, but I want to know if there is any problem in using electrolytic capacitors as shown in the diagram.

In order for electrolytic capacitors to perform correctly, they need to be forward-biased. You cannot reverse-bias them and have them perform properly.

Even though your input signal has a DC component, your feedback capacitor is still going to spend some of its time with its polarity reversed as the op-amp attempts to follow the filtered input signal, which means the feedback capacitor won't perform as a capacitor. Instead, it will function as a capacitor half of the time, and an ever-hotter short-circuit the other half of the time. It won't blow up as quickly as if you attached it in reverse to, say, a 12V power supply, but it won't last very long, and your circuit won't perform as expected. What will probably happen is that your voltage regulator feeding the op-amp will get very hot and burn out before the capacitor boils. So, you cannot use an electrolytic for the feedback capacitor.

An electrolytic may work for your capacitor connecting the positive differential input to ground, assuming your input signal is centered at some DC component. But, if you modify this circuit and remove the DC component of the input signal, and feed the op-amp with two supply rails, one positive and one negative, then you can't use an electrolytic capacitor in either position.

It's probably safest just to go with non-polar capacitors, rather than mix-and-match.

Worried if it will work with 220k? You might need an op-amp with lower input bias/offset currents. The LM358 offset current is about 5nA and this creates an error of 1.1 mV thru a 220kohm resistor BUT given the offset voltage error for the LM358's inputs is about 2mV it's not going to make thing much worse than they are.

Personally I'd go for a better op-amp and get rid of these errors by about a 10:1 factor (off the top of mu head) but it might come down to cost.

Get rid of the electrolytics - you don't need them!!

Electrolytic capacitors used in an AC filter circuits are bad for all the reasons listed so far. (Use electrolytic parts for filtering unwanted AC from a DC line.) Even using non-polarized foil capacitors of the values shown would be awkward as they would be physically very large. The suggestion of increasing the resistor values and decreasing the capacitor values is the best way to go.

To achieve an accurate filter response consider using mylar type capacitors with values at about 1/50 to 1/100 the original values (and recalculate the necessary resistor values). Mylar types will more often include the actual tolerance so that you can better determine the potential error of the circuit's frequency response. Film capacitors at these lower values would also be reasonable with perhaps a somewhat wider tolerance range.

Not the answer you're looking for? Browse other questions tagged capacitor analog filter or ask your own question.

2
Sallen-Key filter problem
1
What frequencies do capacitors filter?
0
High Pass filter gain at higher frequency than cutoff frequency
1
PI filter (on PSU) and electrolytic capacitors after
1
LC-Filter for DPS5005 power supply
1
Is it possible to sweep 20 Hz to 20 kHz with one potentiometer?
0
Issues with a Sallen-Key low pass filter for turning a PWM into a DC voltage
2
Sallen Key Lowpass Filter stops rolling off in simulation
1
Connection of Cx capacitors to neutral in 3-Phase EMI filter