Zero cross detector(IC H11AA1) generates a pulse exactly at zero crossing of AC wave. I am trying to control the brightness of several bulbs(nearly 48 loads). I have 5 different states for them. At state 5 triacs will fire instantly. At state 4 triacs will fire after 1960 micro seconds. Same way for all other states with the delay of 1960 micro seconds. The problem is I need different logic instead of delayMicroseconds() method in arduino to avoid the unwanted delay. I need to generate four interrupts with time interval of 1960 microseconds after zero crossing detector interrupt for every half cycle of AC wave. Is there any software or hardware implementation?

You should check out the Timer libraries. This will give you access to more accurate timers:

The easiest way to do it in hardware, I think, is to drop the mains voltage down to some reasonable level using a transformer, which will also buy some almost always welcome isolation from the mains, then full-wave rectify the low-voltage sine wave from the transformer, using Schottkys. After that, use a comparator to do the zero-crossing detection and 3 pairs of comparators as window detectors to generate the output pulses at \$ 0^{\circ}, 45^{\circ}, 90^{\circ}, \text{and } 135^{\circ}.\$

I'm not sure whether you want to generate eight or ten switch points along the sine wave, but if you need more just add window detectors.

Finally, you could use something like an HC251 to steer the various pulses into the load.

Here's a way better way to do it:

U1-Z is connected to +5 volts, so depending on the Arduino's outputs to U1, as shown on the truth table, 5 volts will be connected to one of the 5 timing resistors for U5A, setting the width of U5A's output pulse, the width of the pulse determining the brightness of the lamps.

When U5A times out, its low going output is differentiated and used to trigger U5B, which will generate the pulses used, ultimately, to fire the TRIACs. 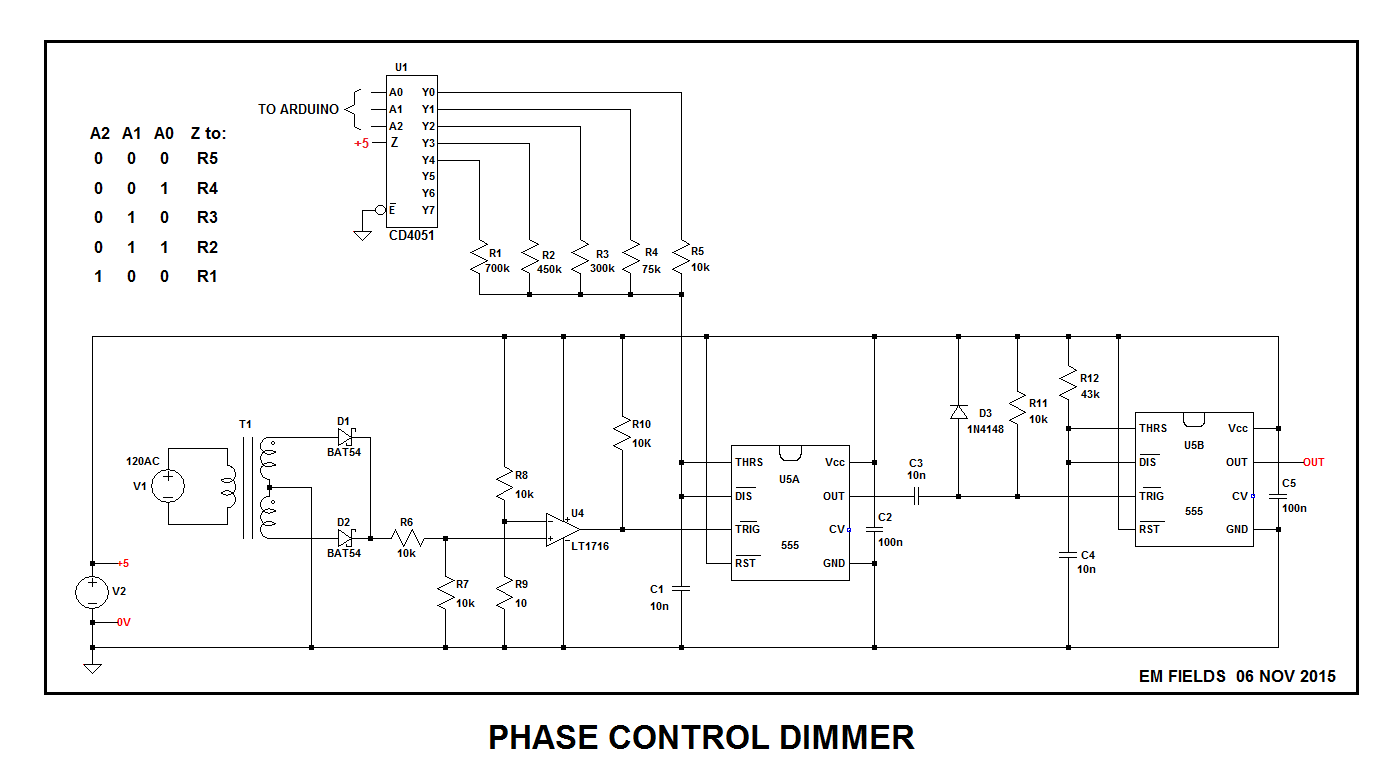 Not the answer you're looking for? Browse other questions tagged arduino triac zero-crossing or ask your own question.