Can I use multiple 18650 batteries in parallel with a standard MicroUSB 3.7V charger board?

There is this Bluetooth Audio Reciever/Amplifier board that I'm looking to get from ebay, and according to the diagram, there's a MicroUSB 3.7V lithium battery charger component in it.

With my understanding that wiring multiple batteries don't increase voltge but rather current/capacity, will I be able to wire in multiple 3.7V 18650 batteries in parallel (maybe 4) in order to increase my runtime, at the cost of having longer charging times?

Is this a universal case or a chip specific situation? I've asked all of the sellers who sell that product, and none of them knows the answer.

First, safety. If each cell has protection already, then that is good. I would definitely recommend you use protected cells in this application. But if not, at least make sure you insert some kind of current limiting device between charger and each cell. This could be a fuse or a PTC (self-resetting fuse). The big issue with cells in parallel is that if one starts to fail, the other cells will dump all their charge into the failing cell, making matters worse. So some type of current limiter is needed to cover this case. A fuse is probably safer, but a PTC would also be reasonable, and can recover automatically if it ever trips during normal operation. 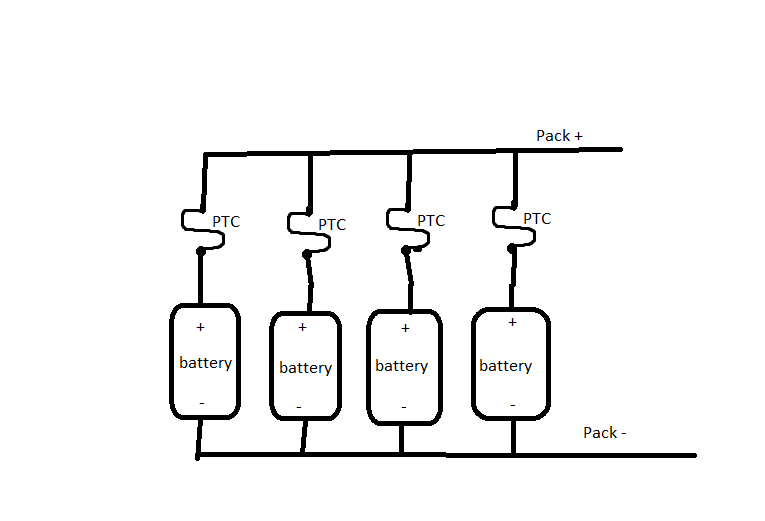 Another issue is that when you initially connect the cells, you should make sure that they are already at the same voltage, or if not, then limit the current until they equalize. The equalization current could be very large for 18650's otherwise (and if you use fuses, the equalization current could cause them to blow). The easiest way to deal with this might just be to individually charge each cell fully before connecting them. The voltages will be very close at that point.

When cells are in parallel, there is probably not a big concern with slight capacity mismatch if they are the same cell make and model. If they are not matched perfectly, they will just naturally share current proportionately to their capacity during charge and discharge, which is what we want anyway.

Now let's consider the operational problems. Chargers are normally set up to charge a cell of a specific capacity. In this case, we don't know what that capacity is, but it is probably not 4 x 18650. Small variations in capacity won't matter, but if you use 4x the design capacity of the charger, there could be some problems. First off, the charge rate will be slow for such a large battery bank. Second, the charge might not terminate properly. The normal charge termination criterion is based on the acceptance of the cell during the constant voltage stage of charging. With 4x capacity, the acceptance may never decay to the low limit required for normal charge termination. Also, chargers normally have a secondary, backup termination criterion. Basically, if the normal charge criterion is not met within a timeout period, charge will terminate anyway. In this case, the timeout may even occur before the batteries are fully charged. Normally, the timeout would only occur if the cell is faulty, but since the capacity is much larger than anticipated, it could trigger prematurely.

Hope this helps! Note that by listing problems, I am not trying to discourage you from trying this. I just want you to be aware of the potential problems so that you will recognize them if they occur.

Yes, but you had better make damn sure the cells are well matched since more than a very small difference can cause issues. And charge them all to the same voltage before putting them together. You probably even want to connect all the negative terminals together and put largish (1kohm+) resistors between the positive terminals and leave them overnight to allow all the cells time to balance before connecting them together directly.

Contrary to what others may promote as OK I cannot ever recommend that you place batteries in direct parallel connection. That goes for charging and for discharging into a load.

For lithium type batteries it is wise advice to charge them individually.

If you must have a larger capacity during the usage discharge into a load it is best to connect all the cells in series and then use a switching regulator to convert the total stack voltage to that which is required for your load.

This caution is especially important for persons that only have the barest of understanding as to why my recommendation exists as it does.

You seem to have an error in your understanding of the product that you linked above. The 2-pin port that is shown at the url is for connectivity to a DC power supply (i.e. 3.7V cell or battery or a 5V USB port)--it does NOT appear to be a charging port. To the right of that port is a manual switch to switch the supply source from 3.7V to 5V.

Now, as for charging li-ion cells in parallel, your cells should have the same charging & discharging profiles/characteristics to be safely placed in a parallel battery (if they don't match each other well then they will not discharge & recharge at the same rates, potentially drain other cells, potentially over-heat during dis/charging, & possibly vent/explode &/ ignite while charging). The cells should all be initially charged to the same level & allowed to balance/equalize in a parallel connectivity arrangement for 24 hours. I would also recommend current limiting resistors in case a cell/s short. That should limit the risk of fire.

Even if you initially start off with ideally matched cells that function well for a while, it is likely that the cells will become unbalanced as they age. The only way to mitigate that problem somewhat is to occasionally manually charge them, balance/equalize them, & replace them when the differences between the cells become too great.

You can also undercharge the cells (e.g. charge them to 4.0 or 4.1V instead of 4.2V) to reduce overheating that will occur during charging as the cells age & become imbalanced.

A parallel battery is doable with li-ion cells, but it is a bit risky & a bit of a hassle as the cells age.

Not the answer you're looking for? Browse other questions tagged power-supply power batteries low-power parallel or ask your own question.

5
Do I need a BMS for Li-ion batteries connected only in parallel?
1
Safe to rely on individual 18650 cell protection in a 4S4P configuration?