How do I get Ad and Acm for a BJT differential amplifier?

In a practise exam question I am given a circuit of a BJT differential amplifier and told to show that these equations are true: 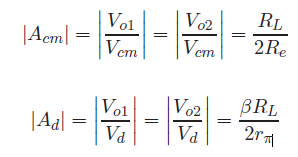 I am told to do it using the hybrid-pi model.

Here is a picture of the circuit: 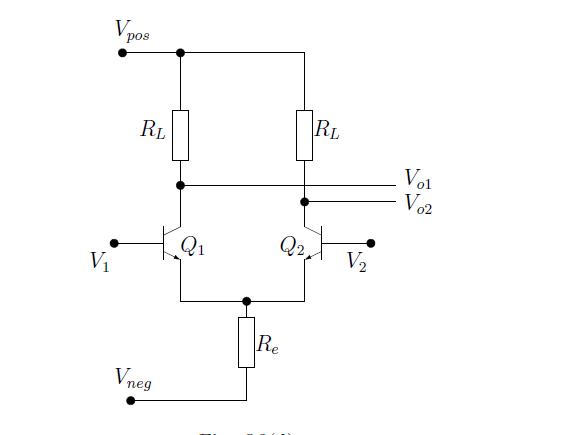 I know how to replace the transistors with the hybrid-pi model, but am not sure how to analyse the circuit from there. I've been having a great deal of trouble with this. Could somebody please show me how to get Ad and Acm?

Edit: I've received some responses but am still confused so will update my question to give a clearer picture of what I understand so far.

Here is the circuit I get when I replace the transistors with the hybrid-pi model. 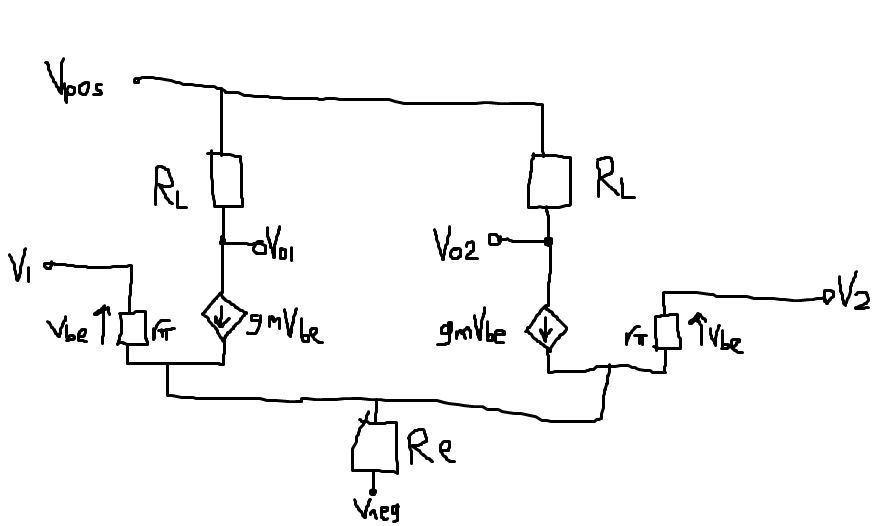 Some of the things confusing me: When I tried to research problems similar to this on google some websites told me that the output would be Vo = Vo2 - Vo1, Yet in this question it looks like I'm supposed to just consider one output at a time, choosing either Vo1 or Vo2. I am also confused by Vpos and Vneg - should I be considering them in my calculations or ignoring them?

I will try to give you some hints:

1.) Of course, you can define the output of the diff. pair at one collector node only (Vo1 or Vo2). It is just another option to use the other collector node as well and defining the amplifier output as Vo2-Vo1.

2.) Differential mode: Assuming linear operation (and this is always assumed) the current increase of the left BJT is equal to the corresponding current reduction of the right BJT. Hence, there is no current change in the common emitter resistor Re. Hence, you can treat each transistor stage as a simple common emitter stage without any emitter degeneration (the common emitter nodes behave as if they were signal grounded). The gain formula for such a simple arrangement is known.

3.) Common mode: Again, treat the BJTs as common emitter stages - however, now with emitter degeneration. Both BJT`s amplify the same signal. Again, the gain formula for a simple common emitter stage with Re feedback (degeneration) is known and can be used - however, you have to consider that the current change through Re is doubled because this resistor is common to both transistors. As a consequence, the feedback effect is doubled and the effect of resistor Re must appear as 2*Re in the corresponding formula.

4.) If you like to start with your small-signal model (and finding the gain values by yourself) the procedure is simple: For differential mode you only need to consider one of the transistors (because they are not connected (emitter signal grounded). This applies also to the common mode - however, in the gain formula you must replace Re with 2Re.

5.) Finally, an important comment: You have defined the diff. mode as V1=Vd/2 and V2=-Vd/2. This is OK. However, please note that in the first part of your question the expression for Ad does NOT apply to your definition. The given gain is for V1=Vd and V2=0. This is a non-symmetrical operation of the circuit, which is allowed but involves also a certain common mode voltage.

Not the answer you're looking for? Browse other questions tagged amplifier bjt differential or ask your own question.