Rather than just piece together my breadboard layouts node by node, I'd like to be able to lay them out on the computer and optimize things by clicking and dragging rather than reconnecting jumpers and components. Another benefit would be they would be documented for when I want to recreate the layout later, or perhaps use it as a module in a bigger circuit.

I've adopted KiCad as my PCB layout solution, and I was thinking I could just put together something like a solderable breadboard layout, one of those PCBs that has the same holes and connections as a breadboard. Then I might place components on that pattern that match the layout on the breadboard. 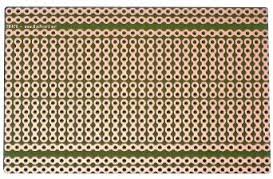 What would be a sensible approach to accomplishing this in KiCad?

The challenges I see so far are these:

Is this something anyone has done before? Or perhaps an experienced KiCad-er can suggest how they might approach the problem?

You can do this without a schematic. Open PcbNew and click on

at the right hand side. This will allow you to add any footprint, such as a 1x1 pin header. Make sure your grid is 100 mil. As a proof of concept, I used the 1x5 pin headers

I've been studying this recently, and have posted this answer. I actually found it quite easy if you can get into the mental frame of mind. For convenience, this is the image I attached so you can see my thoughts... 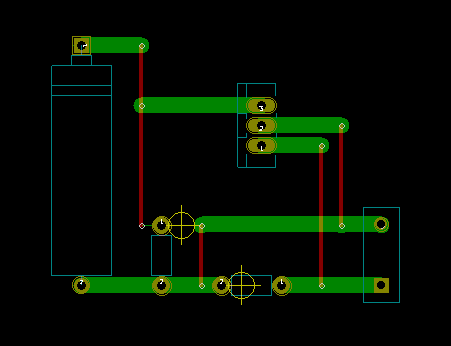 22
Design a veroboard/stripboard layout from an Eagle schematic

5
How to find a footprint?
3
PCB Layout and Trace Widths for Buck Converter
0
PCB layout feedback (buck converter)
1
What would prevent me from copying pads (or other components) in Altium?
2
Does a silkscreen text or line over pads/mounting holes give problems?
1
Using Kicad & proper part symbols: How do I add these types of parts for through-hole PCB?
1
Kicad: Are these traces all connected (if on same layer)?