I'm looking at some transistor radio circuits and the book I'm following makes the following statement with regard to AC gain: "By raising the DC voltage at the collector, the internal collector-base capacitances of the transistor are reduced".

Here's a circuit to help understand what's going on: 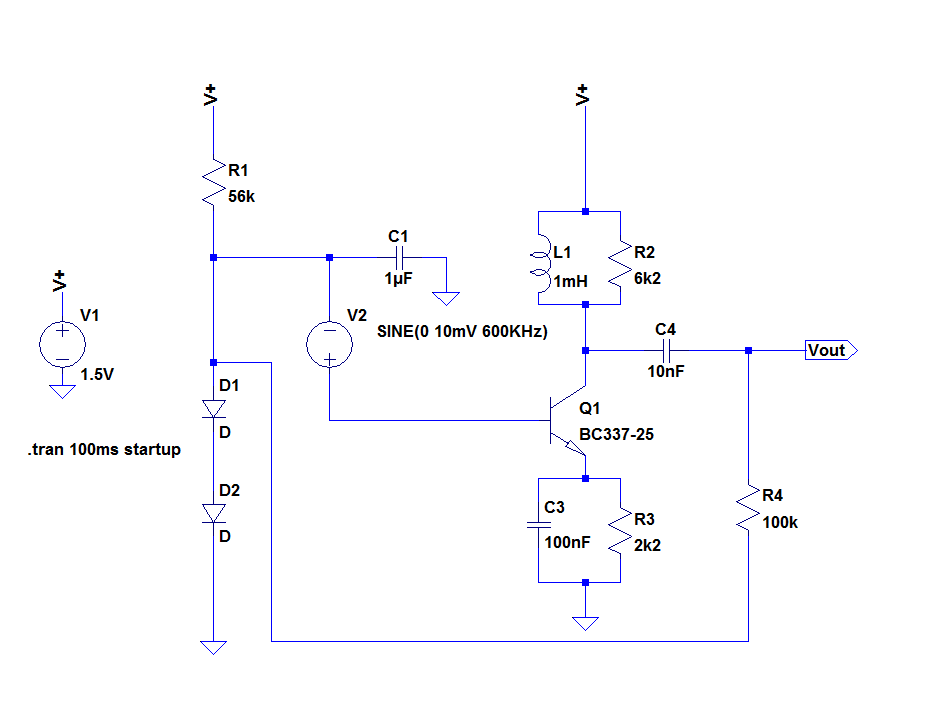 Here the author has killed the DC gain by placing an inductor in parallel with R2 whilst leaving the AC gain intact: collector reactance (L1||R2) / emitter reactance (C3||R3).

I have a reasonable grasp of the effect of Miller Capacitance on an inverting amplifier, where the inverted output acts negatively on the input. What I don't understand is why increasing the collector voltage acts to reduce collector-base capacitance.

Does the increase in current flowing through the collector-emitter junction have anything to do with it?

As @FakeMoustache hinted in a comment to your question, the explanation lies in the behavior of a reverse-biased PN junction, because that's what Q1's collector-base junction is in your circuit.

From a macroscopic point of view any reverse-biased PN junction acts like a parallel-plate capacitor whose capacitance (called transition capacitance \$C_T\$) depends inversely on the reverse voltage \$V_R\$. The relationship is not linear, but it is approximately:

Struggling to remember the exact form of the formula (there are half a dozen of ways of writing down that relationship, depending on which physical parameters of the junction you want to emphasize) I found a more intuitive formula in this Google book:

Another interesting article on the subject (tougher semiconductor physics stuff) explains how to derive that relationship (in yet another form!).

Not the answer you're looking for? Browse other questions tagged transistors capacitance gain high-frequency or ask your own question.

6
Good NPN configuration vs bad configuration
0
Why is voltage output inverted between common-emitter and common-collector amplifiers?
2
Can the parameter \$\alpha\$ and \$\beta\$ be used for any BJT?
0
Can I use BC558 PNP transistor with 5V DC supply?
1
Collector-Base capacitance in simple FM transmitter
1
Common base configuration impedence
1
Why does this PNP BJT use dual supply but the NPN not?
0
What is the purpose of a capacitor placed between the Base and Emitter of NPN Transistor & Zener Diode placed between Gate Source of MOSFET
0
High dV/dt turning on BJT switching Circuit due to Miller capacitance