Why is LM 317 regulator getting hot? [duplicate]

I have just made up a adjustable regulator circuit using the LM 317T, the input is approx 33 V, and output 16 V, but the LM 317T when cold regulates at 16 V, but once the LM 317T gets very hot the voltage drops to around 13 V, and is not regulating, my load is drawing approx 150 mA, can anyone please advise.

If you look in the device's data sheet it will tell you how many degrees in temperature the device's "internals" will warm per watt dissipated into the ambient surroundings. For instance the T0-220FP is 60degC/watt. You are dissipating nearly 3 watts so, without a heatsink, it will be internally (the junction) 180 degC warmer than your ambient local temperature but, of course, it "shuts down" well before 205 degC to protect itself. OK so far? This is the current situation without a heatsink.

There is also another figure called thermal resistance (junction-to-case) and this is 5 degC/watt. If you had an "infinite" heatsink, you would find that the junction (inside the chip) would get only 15degC warmer than the outside world and life would be sweet.

But you can't have an infinite heatsink so you find one like this: - 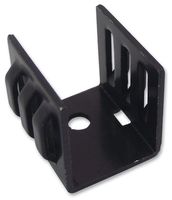 From Farnell here. You read the spec and it tells you that its thermal resistance is 21 degC/watt.

Next you add the 5 degC/watt to the 21 degC/watt to get the final thermal resistance, (junction to ambient) of 26 degC/watt. With 3W dissipated you have a temperature rise of 78 degC above ambient (say) 25 degC - this means the device will rise to about 103 degC. This heatsink might be OK but if your electronics is mounted in a box that is a little small, the local ambient may rise by 20 degC so you might have to take extra measures to sort out the extra rise.

I've just been reminded that the 60 degC/ watt (junction to ambient) below: -

Alternatively drop the input voltage to 16 V using a buck regulator - it's about 90% to 95% power efficient and would therefore only dissipate about 200 mW but that's another question in case you want to follow that sensible route.