Correct me if I am wrong

Here are my doubts

4, This should be a 50W mosfet. Yesterday, I tested this mos with a 12v vdd and a 12v power led. 12v-led-drain/ source-ground/ gate-10kohm-12v; and the current is just 550ma. It's not bright enough if I were connect the led directly to 12v power source. what is the problem here?

"What exactly is Vt? what is the exact problem here?"

The problem is that you're not paying enough attention to the data sheet.

First, when Vgs(th) is specified, note that the current level is .25 mA. Since I assume you want to drive more than .25 mA through your LED, you're going to need more gate drive. Second, for full brightness you'll want Vds to be as low as possible, so again you'll want more gate drive. Third, when the voltage is specified as min/typ/max, it means just that. The gate voltage required to drive 0.25 mA might be as low as the min, or it might be as high as the max, but typically it will be the typ voltage.

When you set up your circuit, let's assume your LED will have a nominal Vf of about 1.8 volts. Then a Vds of 0 volts means that the resistor will drop about (4.1 - 1.8 = 2.3) volts, and a 100 ohms means a current of 23 mA. However, remember that Vt is specified at .25 mA, which is probably just visible. You can check this by running your circuit with the LED just visible, measuring the voltage across your resistor, and finding the current. In this case 1.3 volts sounds perfectly reasonable.

If you want your pot to go from barely on to full on, you'll need to add two more resistors, as follows 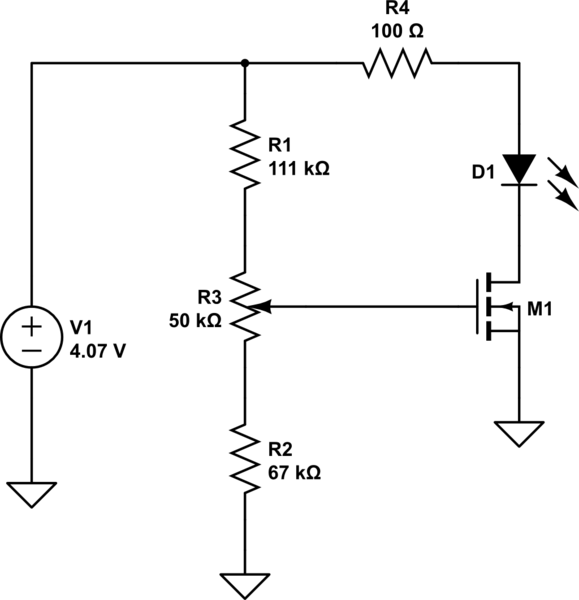 Not the answer you're looking for? Browse other questions tagged power-supply mosfet or ask your own question.