I am using the MSSP module of a PIC 18F25K22 (datasheet) for SPI. This works successfully except for when I try to use the maximum SPI clock rate of 16Mhz.

The target device is an SD card and the symptoms described below happen with a selection of different cards, tested with 6 cards from different manufacturers.

The microcontroller clock is the internal 16Mhz oscillator with 4x PLL, setup as shown below.

The relevant portion of the circuit is shown below, connections go directly to the PIC (note I used 47k resistors when assembling the PCB).

There are some right angles on the PCB where I broke out the SPI pins for debugging. On the top layer the traces go to the debug header, on the bottom to the PIC. I include this in case signal integrity might be relevant. 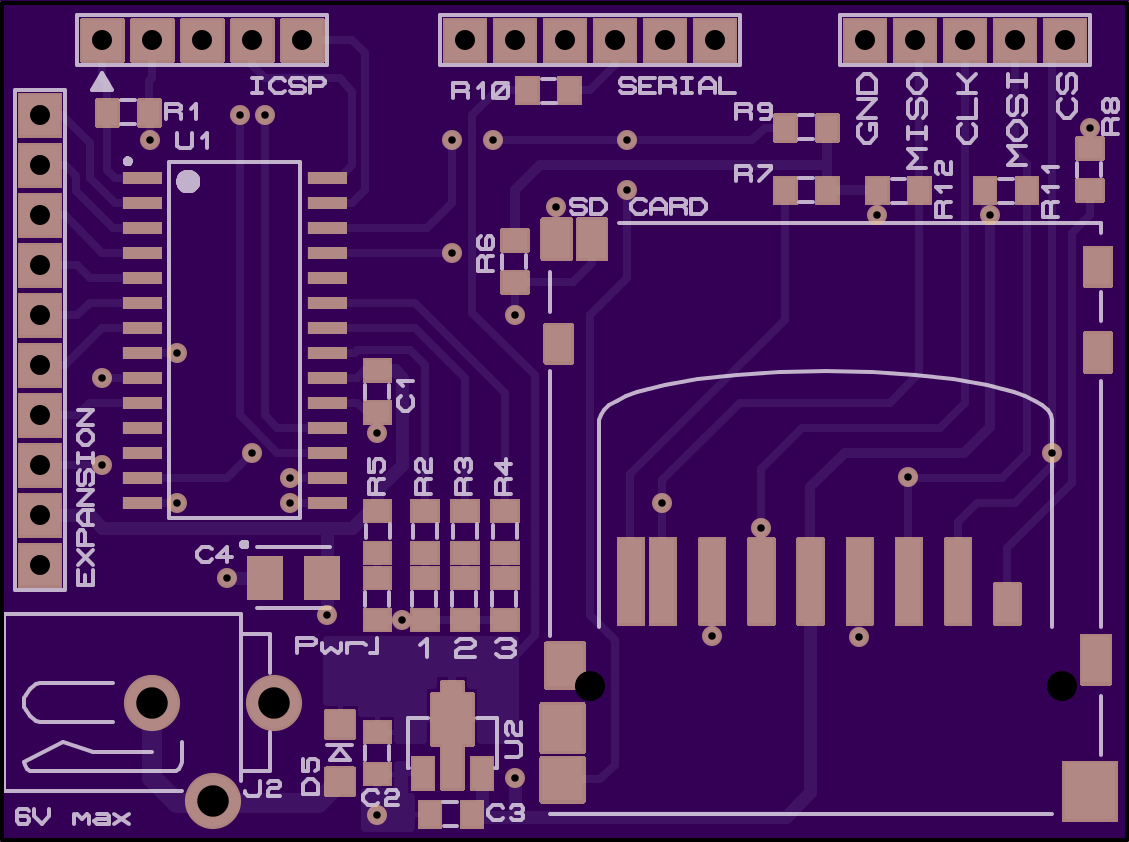 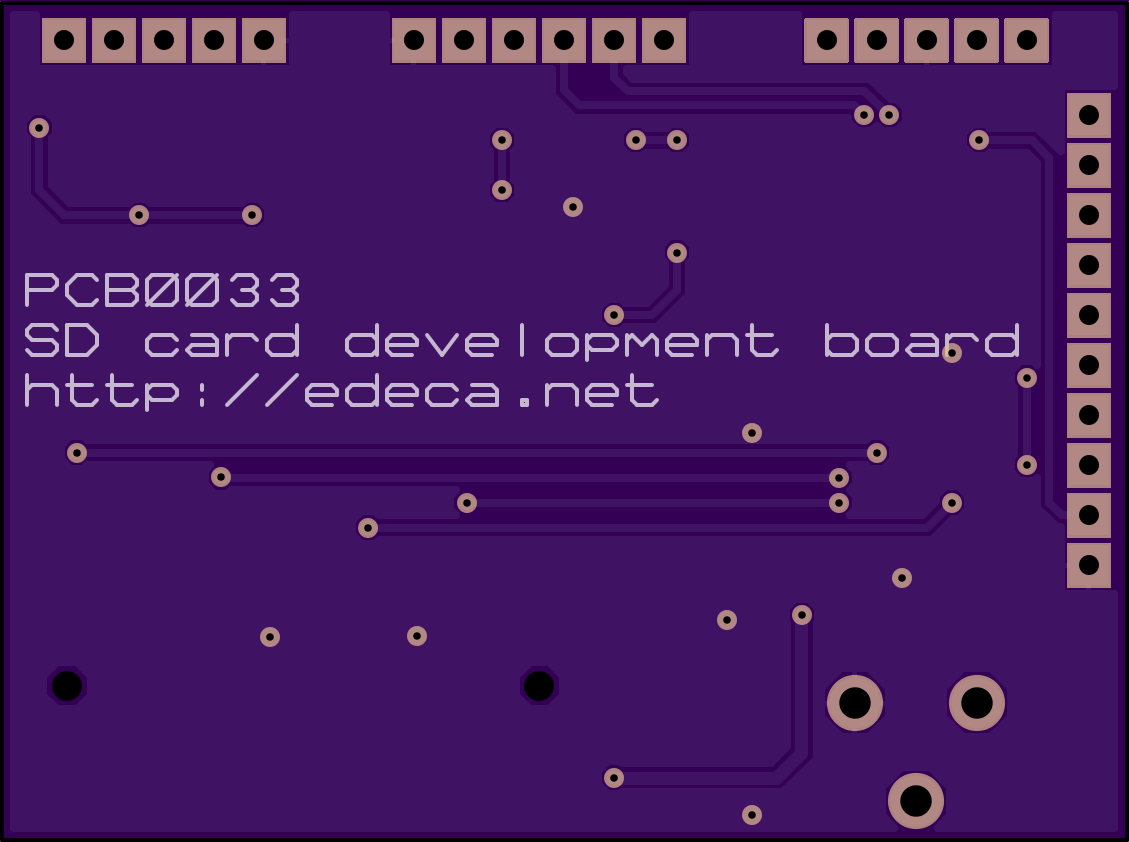 Any speed below the theoretical maximum works successfully.

Data is written using the most basic method, no interrupts are used:

When tested with a logic analyser there's a decent 8Mhz clock and my code works fine:

I'd like to use the fastest clock possible, the datasheet shows two ways to do this: 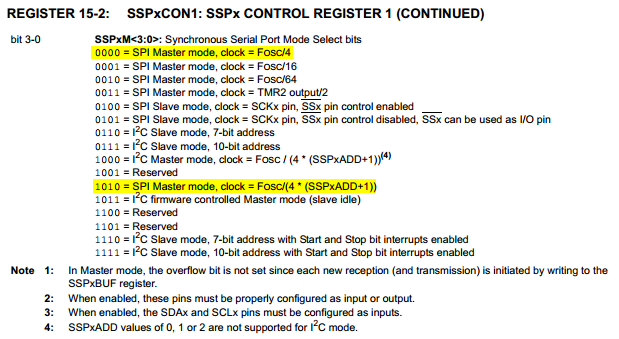 I should be able to:

With my 64Mhz clock this should give a theoretical SPI clock speed of 16Mhz from the MSSP module.

SD initialisation requires a slow speed, below this can be seen marked by the red "1".

This phase is successful. Therefore I should be able to speed up, so I tested with SSP1ADD set to zero (this happens around marker "A1"). The faster clock should be present in the period marked by a red "2".

However this does not work and produces a very unstable clock of about 82Khz, shown below (this is a zoom of the period marked "2" above).

The first three bytes here have a slightly faster clock but it's still only ~400Khz (far below 16Mhz) and the duty cycle is nowhere near 50%. Then the clock rate mysteriously changes to ~82Khz during the fourth byte and is more like a series of pulses than a clock.

The 18F25K22 does have slew rate control, which has an impact. The above traces were taken with the default settings, slew rate control enabled. When disabled the above settings give a SPI clock of 400Khz (which is more stable and does work), but is far slower what it should be.

Does anybody know if I should be able to use an SPI clock of 16Mhz, or am I missing something from the datasheet?

LOOK AT THE SLRCONX REGISTER, WHERE X IS PORT A, B OR C. Default bits are set, which limits slew rate to 25nSec, too slow for 16MHz SCK! Reset the bits corresponding to the port and pins you are using for SPI clock and data and it will work great. I got bit the same way, found the solution on another forum.

Maybe this is unrelated, but in the PIC16F145X datasheet a fifth note is added for SSPM bits for SPI mode.

So in this other PIC you cannot use SSPADD with 0 and have Fosc/4 when using SSPM = 1010. I think the SPI module may have the same rules as in your PIC18F25K22, but somehow that may not be shown in the datasheet.

you see that it begins count down, and when the value is 0 or 1 this is very difficult to do by the micro. In other datasheet(dspic30F3012) they said that clearly in I2C: 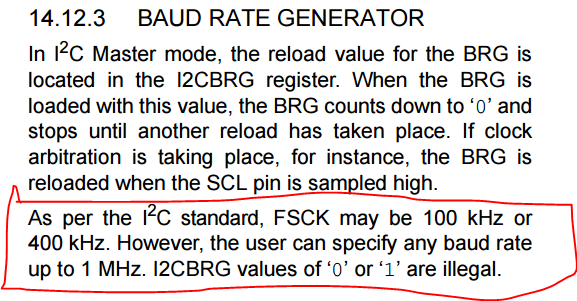 The use of 0 or 1 is illegal . so use greater PLL or greater crystal.

Not the answer you're looking for? Browse other questions tagged pic spi or ask your own question.