How to isolate two ground signals?

I'm have grounding problems (80% sure of it). I have an MPU6050(gyro sensor which works on 3.3V) which is powered by the Arduino's 3.3V pin and SCA,SCL,INT pins are used with the I2C bus of the Arduino Uno which I believe is also 3.3V, and finally the ground is connected to the Arduino's ground. All works well now, I get raw values which is processed into angles and finally printed in the serial monitor. So far so good. Here comes the big problem, the minute I connect a 12V lipo's ground to the arduino ground the MPU6050 stops responding. Clearly the battery is producing some sort of noise to the arduino , I'm using the lipo to power a motor driver (L298) which controls two motors. If I separate the ground(motor driver i.e battery) from the arduino the motors do not respond, clearly they need a common ground to work in harmony. Will adding a capacitor in series with the ground of arduino and motor driver solve this problem? If yes, of what value? [I've attached Fritzing breadboard schematic,I dint get the exact battery part so I've just attached a random battery. The battery I've used in my setup is 11.1V 2200mah]

And here's a link to my motor driver specifications : Link 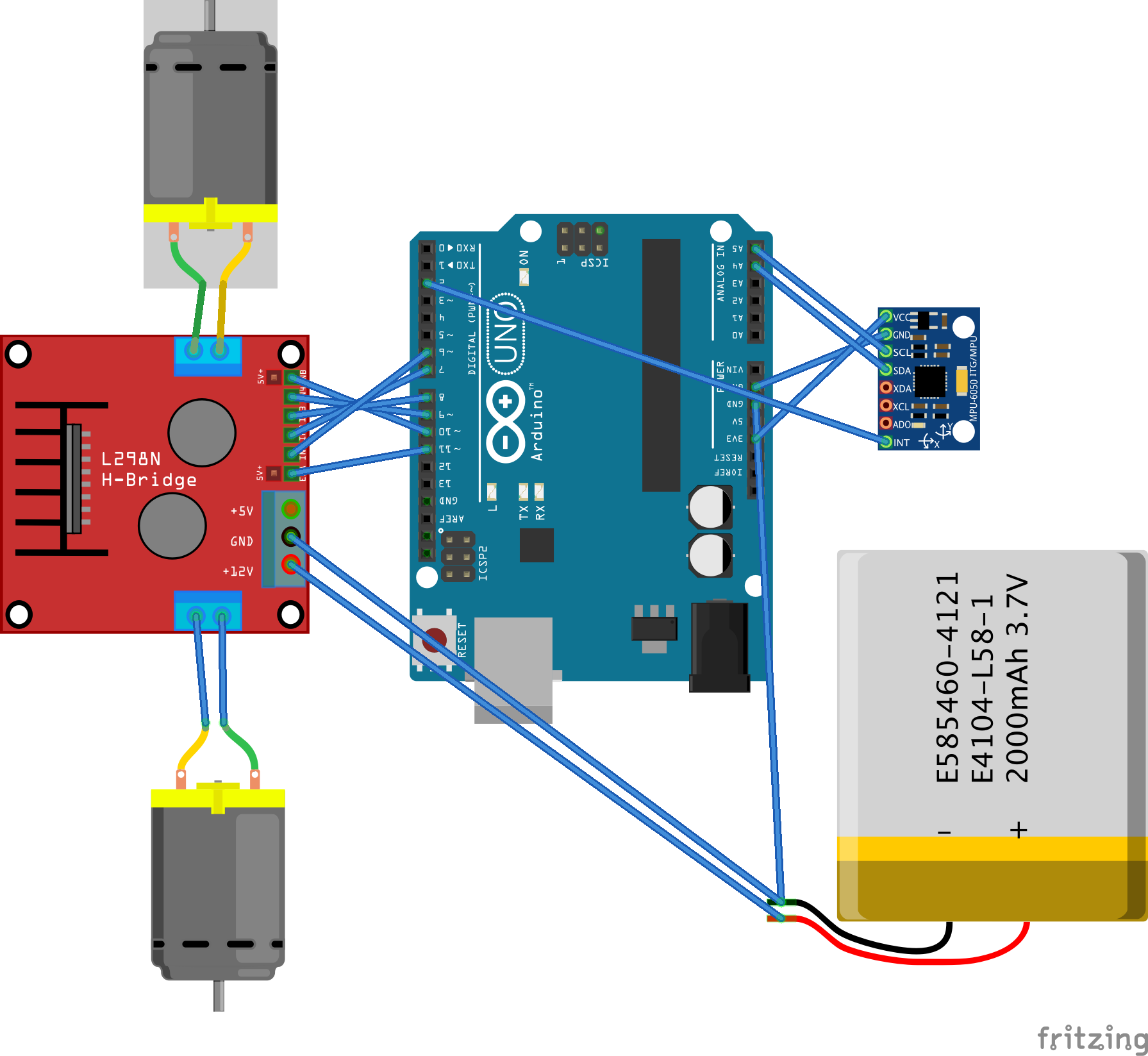 First, the arduino's I2C bus is 5V. You have no guarantees that it'll work with a 3.3V device. So you were already living on the edge before adding the motor. Best case scenario, the MPU6050's 3.3V are not considered high by the arduino. Worst case, the arduino's 5V fries the MPU6050. You should use some kind of logic shifter or, at the very least, add a ~330 ohms resistor in series with the I2C bus to guarantee that when the arduino outputs 5V, the MPU6050's internal protection diodes survive (don't quote me on that though, the MPU6050's datasheet says nothing about this. For all I know, it could go singularity when you show VDD+0.5V to its I2C pins)

Now, assuming you don't care about that, you just want the motor to not influence the rest of the circuit: the reason you need to connect the grounds is because when the arduino sends a 5V signal, the driver has to understand that it's a 5V signal. It does so by comparing the signal's voltage to its own reference (GND pin). If the grounds are disconnected, the voltage the driver "sees" will be random, since the driver's ground could be, say, 2V above the arduino's ground, completely messing up your logic. The problem is that your motor is probably making a lot of current flow through this ground path, making some voltage drops appear on it.

You could: (in order from less work to more work)

@RakshithGb Fixed his problem, but He ask me a circuit example using SI8660.

Because of confidentiality issues, I can't post the exact circuit, but this sketch shows an application of the digital isolator. It's only a simplified version. 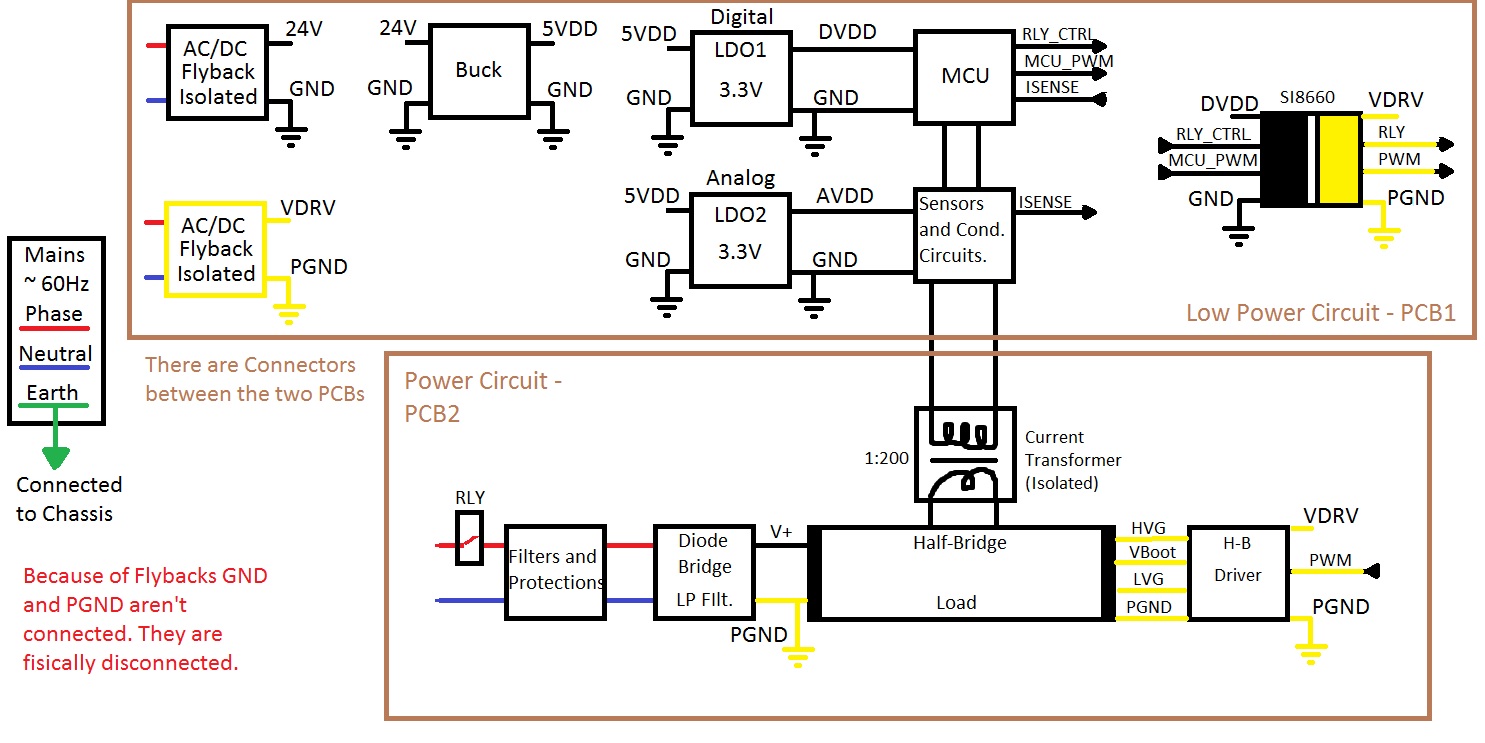 The history of this circuit is that it has a UI and because of security issues is not recommended that's interface has some physical connection (grounds or power supplies) with the power part (half-bridge). To avoid any damage to users.

Then, We think about it. What's the best way to isolate low power circuit (control circuit) from power circuit?

Another AC/DC isolated power supply was used as solution. Check out the sketch: PGND and GND are not physically connected.

The current transformer and the safety relay are already isolated by nature. However, the relay signal is applied through SI8660 because it converts the signal in a range between 0 and VDRV (proper to relay).

33
What happens if I omit the pullup resistors on I2C lines?
1
How to isolate the microcontroller from power source?