I'm having a bit of trouble figuring out a suitable method to sense when some LEDs in my Garage Door Opener are on. This is a continuation of this project I asked for advice on recently. However I had made assumptions which turned out to be incorrect.

A power source (perhaps the same as Vout below) runs to a 1.5Kohm resistor which runs to 6 LEDs then a transistor of some sort. The transistor is attached to ground and pin 7 on a PIC18F4520. Pin 7 on the PIC is a digital out thus I'm assuming PWM is used to dim the LEDs.

I was hoping to use the voltage across the resistor as the control signal but it seems this will be too messy/difficult.

There are four points where I can easy wire into: 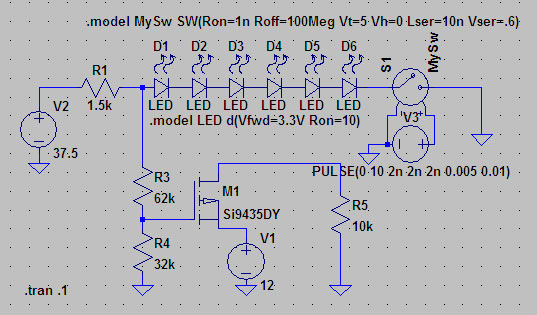 Existing parts in the Opener: V2 = Vout and/or the LED power source (not sure if they're one and the same) R1 is the current limiting resistor D1-6 are the existing LEDs

Additional components for my circuit are: R3,R4 voltage divider to power the mosfet. M1 FQP27P06 mosfet, I've chosen another mosfet in ltspice which should be similar. V1 12v out from the D24V3AHV buck converter. R5 simulated load for testing in ltspice. This will be replaced with the external light.

What I'm not showing here is the power coming into the buck converter. This will come from Vout and Gnd. My primary concern here is that my output will be all whack because Vout is not a constant voltage source it seems. That and I will be modulating the load on the buck converter meaning it's voltage might go all over the shop. There doesn't seem to be any data available from Pololu on the exact behaviour.

I've simulated the PWM from the PIC with S1 and V3.

I haven't yet received the parts I will be using for this so I haven't tested how the regulator is affected by changes in voltage supply or loading. The info on the site hasn't been much help.

I'm wondering if there's a better way of doing this? I'm probably causing myself headaches by trying to pull a signal from these four connection points. The problem is that nearly everything is SMD and I'm not confident enough with an iron to wire into the PIC pin or anything there.

Also, I was wondering if there would be a way to also use the SHDN pin on the buck converter to draw less power when the system is inactive. With my current draft I can't see it being possible.

The circuit is fun to follow but very very very unconventional.
If you submit circuits like that Olin will have a triple fit and explode on the spot :-). The zig zagging layout style and having current flow and control "flow" in both directions makes the diagram very hard to follow, and the bits that you have left out also do not help.

Most of it seems possibly OK.

2
Safe to use PWM source to control lights via MOSFET?