I know that RAM is a word used to describe a type of memory that is volatile and more importantly doesn't have a speed difference when accessing different parts of the "memory grid". Isn't the last characteristic of RAM(no speed difference between accessing different areas of the memory) technically not possible because it depends on the length of the wires going to that intersection of the grid from the two decoders?I know that some of my terms are incorrect and may be misleading so here is an example diagram of a RAM chip(on the first page there is an architectural diagram):

On the datasheet the "memory grid" is called the array, and two decoders are used with the address input so that one "intersection" can only be "active" at once.

Wikipedia says "almost same amount of time irrespective of the physical location of data inside the memory". And then

Even within a hierarchy level such as DRAM, the specific row, column, bank, rank, channel, or interleave organization of the components make the access time variable, although not to the extent that rotating storage media or a tape is variable.

And to stick with DRAM as example

The speed differences are going to be less significant in a SRAM, which lacks this more complicated access model that DRAM has.

Here's a latency (=speed) comparison in an actual (albeit fairly old) system: 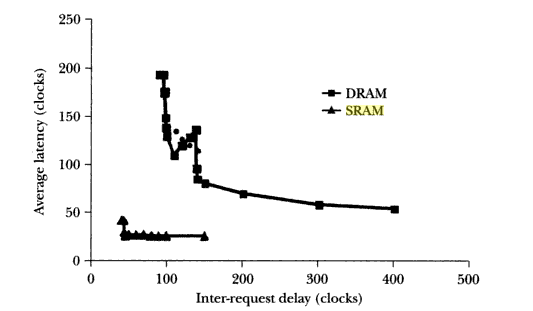 There's almost no discernible latency (=speed) variation for SRAM, but there's a lot more for DRAM. The sudden vertical you see is when the SRAM (bandwidth) saturates.

And you do have intra-die latency variations between cells even for SRAM; the following graph is for a [simulated] 45nm process. SECDEC ECC can be used to mask away the speed of the slowest cells; otherwise these would determine the (speed/latency) performance of the entire chip as the lowest common denominator. 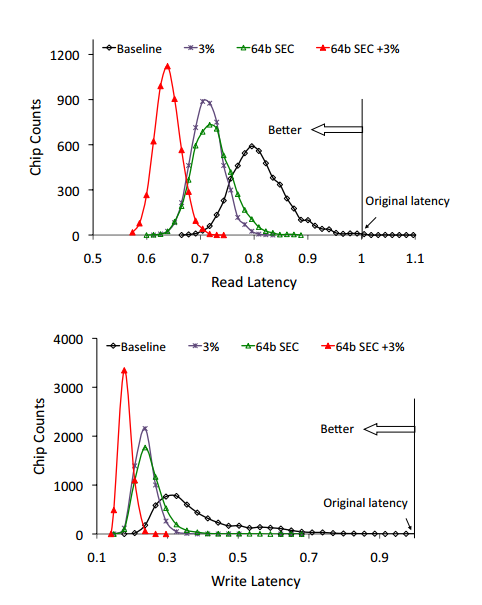 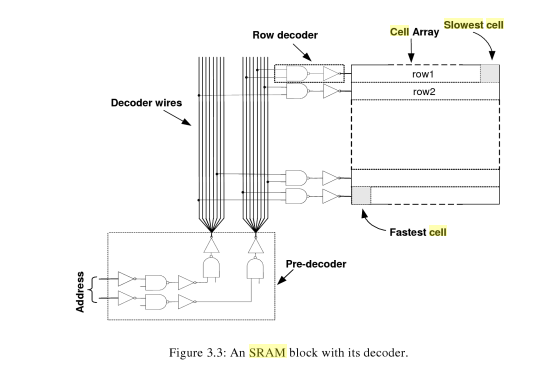 Not that any of this is reason not to call it RAM anymore.

The term RAM comes from the historic division between sequentially accessed memory (mercury delay lines, rotating drums and the like) and random accessible memory (like wilkinson tubes and ferrite core memory). All these memories were read-write (but in most cases a read was destructive or even time-boxed), so there was no urge to make a distinction between read-write and read-only. Of these types of memory only RAM survived, so we are stuck with that term for memory that can be read and written, and can be addressed (almost) at will, without (much) speed impact.

Some time later, memories began to appear that could be read, but not written (IIRC the bits were 'wired' by winding a wire clockwise or anti-clockwise around a peg). Those memories were randomly accessible, but to distinguish them from the read-write memory they were called Read-Only Memory or ROM.

Now we have all types of memory that are fussing the borders, like flash, which is a mostly-read but you-can-write-it-some-number-of-times memory.

So yes, the term RAM is at least partially misleading, but we are stuck with it.

(For you to research: why is a file that contains the image of a crashed program often called a 'core dump'?)

"I know that RAM is a word used to describe a type of memory that is volatile and more importantly doesn't have a speed difference when accessing different parts of the "memory grid".

Well, no. RAM (random access memory) refers only to the ability of the system to modify the contents of the memory, as opposed to ROM (read-only memory) which cannot ordinarily be modified by the system. The distinction between the two has blurred considerably in recent years, both in terms of self-modification and volatility. Flash memory, for instance, for BIOS storage is ordinarily treated as a ROM, but it can be modified. Likewise, even 25 years ago Dallas Semiconductors was selling non-volatile RAMs, which had a backup battery as part of the package. So your ideas about RAM are clearly wrong.

If you could provide a source for your claim about speed differences, it would be helpful.

In modern systems, RAM timing is fixed, but this has not always been so. For example, in the old PC expansion scheme (ISA bus) any memory accessed by the system had the possibility of wait states being asserted by the accessed memory, and each physically distinct memory could assert a different number of wait states. The same was true of most minicomputer architectures. As a result, it was perfectly possible to mix memory cards, with wildly different access times available to the processor.

Not the answer you're looking for? Browse other questions tagged ram or ask your own question.

6
256X8 RAM chip question
0
Can a computer and its RAM function properly if the temperature of the RAM has been significantly reduced?
3
FPGA RAM / SRAM in VHDL
1
Building larger ram from smaller ram
12
What happens when microcontrollers run out of RAM?
0
Is RAM always readable
2
4x1 bit RAM implementation
0
Byte-addressable RAM as opposed to word-addressable RAM
0
What to call the cells of memory in a computer or a microcontroller?