Can thin sections of copper traces be used as fuses?

Is it safe to use thin sections of copper traces as one-shot fuses when cost is important, but when it is also vital to protect the rest of the circuitry? Should the solder mask be removed at that location? What about using 0R resistances in small packages as resettable fuses?

That's for applications when time to fuse is not critical compared to the location of the failure. For more demanding applications, are there I-t graphs of tracks of various widths available? I have not found any.

It's certainly been done. 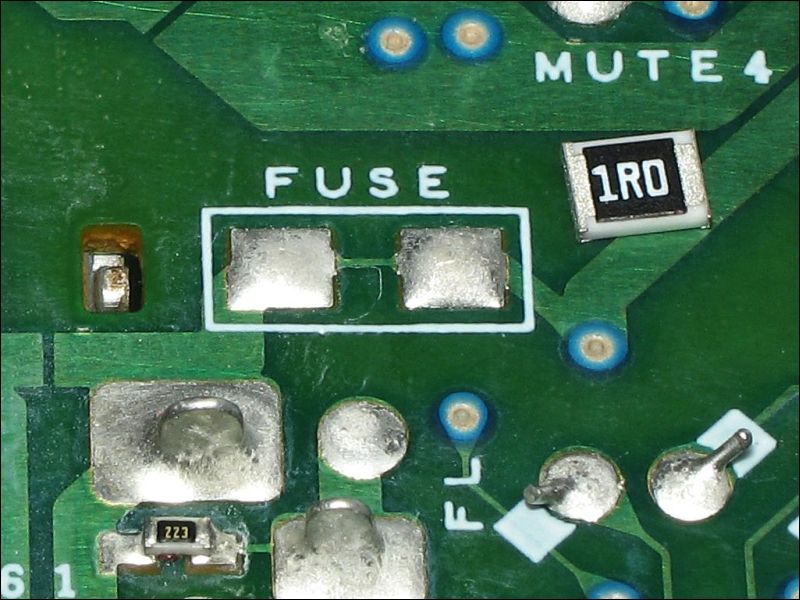 It's a bit more of a crapshoot than a traditional fuse, like a printed spark gap, but can be done. The trace should not be exposed. An exposed trace will be subject to contamination, possibly conductive contamination, which changes the amount of conductor you designed for a certain current. Admittedly a minor concern, but I don't see any pros for exposing the trace.

The above board was designed with pads to replace the fuse, it's from a car stereo system so they're likely expecting shorts downstream rather than surges from upstream. Having exposed pads for the latter case would be less desirable as a surge might burn the fuse and leave a conductive creepage path between the pads.

This paper explores and provides calculations for determining trace size for a printed fuse with a variety of copper weights.

A salient point from the paper, in case it isn't always available is the approximation for the time in seconds (\$ t \$) before a trace reaches melting temperature given current passing through it (\$I\$) and its cross sectional area in mils squared (\$A\$):

Note that this is the approximate time to melt the copper given a 20°C ambient temperature. It might fail long before or a short time after this value.

I've done this in a real production design, and regretted it. "It seemed like a good idea at the time."

I wanted to protect a backplane against a card being plugged in with a power-to-ground short in the card connector. I put a necked track on the power line to each socket on the backplane. Sure, it worked, and never blew by mistake. However, when the trace did blow, it meant the poor field engineers had to replace the whole backplane. I should have used thicker traces and just let the power supply shut down.

Perhaps another consideration is the possibility of a fire in a PCB. A low current in a PCB trace will not raise temperature. A high current will blow the trace. An intermediate current, limited by some other effect? Maybe that will raise the trace temperature enough to burn the PCB but not melt the copper. I have seen that happen with very, very fine traces, and it can set fire to a fibreglass PCB. The epoxy changes to just carbon, then the carbon starts to carry more current which heats up more, then... the results are not pretty. There must be ways of designing the trace so this cannot happen, but I looked for design rules and could not find them.

I have got PCB layout people to do this for me for over 20 years now. The applications were mainly on Automotive stuff where the 12Volt battery has a huge fault current. I would call this a necked track. I have never used this for any precision application. The necked track is good for protecting the cars wiring loom in the event of a fault when the inline fuse has been bypassed. We did tests by shorting a 12Volt marine battery into wire of various lengths to emulate the cars wiring loom. Our setup would have had microhenries of inductance not millihenries so it would be referred to as resistive. SO at low volts resistive and high fault currents the necked track is safe. We used 10 thou track. At the time we were much more concerned with safe blowing than precision. The thinking at the time was that if you wanted precision you would use a MCB.

Why use a trace for a fuse? It means the board will be unusable if there's an overload until someone repairs it. And how do you repair such a fault? Throw away the board and get a new one, right? If you're just messing around, go ahead and use a trace. If you have a serious application, consider a resettable fuse, for $1 or so, which will automatically reset itself after an overload. Your repair techs will write blogs about how much they like it. An ordinary PC board mounted fuseholder with a fuse is a cheap solution, but service is more costly, in manpower, inconvenience and downtime. A circuit breaker costs more and still requires human intervention. If it's panel mounted, it's easier to replace, but that adds cost, labor and extra design effort.

It's hard to envision a commercial application where a circuit board trace used as a fuse is a good idea. It's more likely a very bad idea. And in many cases, a circuit designed with overload protection is better all around. Sometimes it's as simple as choosing the right voltage regulator chip with built in overcurrent protection.

One issue I see - and please let me know if I am mistaken - is that once the trace blows up, how can you reliably be sure there will be no arcing between the traces (in the case high DC voltage develops across the blown fuse). As a reminder, arcs due to DC voltage will not go away (unless the voltage is removed).

Not the answer you're looking for? Browse other questions tagged pcb fuses or ask your own question.

6
Copper PCB traces not connected?
6
Can noisy USB traces slow down USB communication?
4
Can I prevent copper traces from delaminating due to soldering heat?
3
Can EAGLE CAD make square-ended traces?
0
3.15A and 4A fuses - can I swap?
2
What fuses can I use for branch circuit protection above 600 amps?
6
Should we remove unconnected copper island among connected traces?
3
Top Ground Copper pour in PCB having three RF Sections
5
How to minimise trace fracturing in PCB design - multiple thin traces or one thick?