Question about the basic differences between a MOSFET and a FET

I'm still new to all this stuff, but I'm slowly trying to understand. I'm getting most of my information from "Getting Started in Electronics" (Forrest Mimm's book)

Okay, so MOSFETs allow current to pass through the source and drain if positive current is flowing through the base. Am I correct?

First of all: Negative current going to the base. How would you set this up?

Also, I don't really understand how a bipolar transistor differs from these other two? Is it just that a bipolar transistor is the same as a MOSFET, but only has an OFF and an ON, rather than a OFF, "some", and "full current"? Sorry, I'm a HUGE newbie at this stuff, but I'm just trying to "get it".

Also, I'm not really sure what a Transistor Amplifier does, or what purpose it serves.

Now you know why I don't like this book.

Basic differences between a MOSFET and a FET

A MOSFET is a type of FET. It stands for "metal oxide semiconductor field effect transistor". All MOSFETs are FETs, not all FETs are MOSFETs. But the term is so common that things that are not actually MOSFETs are still called "MOSFETs", so there isn't really much difference; the terms are kind of interchangeable.

FET's do the same thing? But it's when a negative current is applied to the base?

No way, man. FETs don't have bases, they have gates. And gates do not pass current. The "metal oxide" part means that the gate is actually an insulator. No current can flow through the gate unless it's been destroyed. FETs are activated by a voltage on the gate, not a current. The connection is made by capacitance, by an electric field that reaches through the insulator, which is why they're called "field effect transistors".

When you apply a high enough voltage to the gate (relative to the source), the path from source to drain becomes a short circuit, just like a closed switch. When the voltage at the gate is low, the drain-to-source is not connected, like an open switch.

First of all — negative current going to the base — how would you set this up?

Yeah, this confused me when I read this book as a kid, too. Don't think of current in terms of electrons. No one in engineering does. Get a better book and learn about conventional current, which is a flow of imaginary positive charges used to simplify equations and abstract away the charge carriers (which can be electrons, holes, ions, or even protons). Conventional current flows into the base from a higher voltage.

Also, I'm not really sure what a Transistor Amplifier does?

Transistors are not amplifiers, despite what you read in books like this. Transistors are like valves that can be opened and closed electronically. You can use this property to build transistor amplifiers. If you connect it to a power source, you can amplify signals, or switch things on and off, etc.

I think the switch function of FETs should be taught first, since it's the easiest to understand (high voltage → closed switch, low voltage → open switch), then the variable valve amplifier function, then the same functions with BJTs. But books and coursework tend to go in chronological order of when they were first manufactured, which makes no sense to me. FETs were actually invented before the first BJT was manufactured, because they're conceptually simpler.

No, you are confused. FETs are controlled by voltage on the gate. The gate does not draw current, which is to say it is high impedance. In a MOSFET there is actually a layer of silicon dioxide beteen the gate and the channel. In other FETs the gate is a reverse biased junction to the channel.

Bipolars differ in that they are controlled by current thru the base. I remember writing a more detailed answer on this a week or two ago. Perhaps some searching will uncover it.

Both types of transistors can be used as switches or in partially on mode. That depends on the circuit.

In the following circuit when the voltage at the gate, V(GS), is higher than the threshold voltage the LED will turn on. 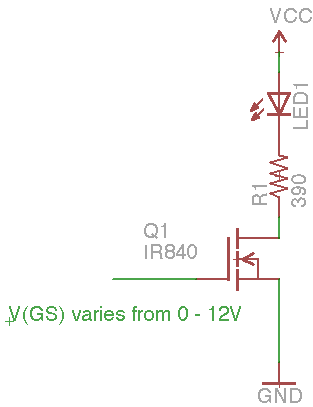 This is because when the MOSFET is off, it has a very high resistance between its drain and source. Think of this as a switch in the open position. In this case, most of the voltage from the supply also drops on the MOSFET itself.

If you increase V(GS) slowly starting from 0V, you'll notice that at a certain value the LED lights up. That is your threshold voltage. If you keep increasing your V(GS), the LED will increase in brightness - this is because the MOSFET's resistance is dropping and it's allowing more and more current to pass. Eventually, you'll notice that the LED brightness does not increase no matter how much you increase V(GS). This is because the MOSFET's resistance no longer determines the current (it's your 390 Ohm resistor).

If you increase V(GS) to some large value, like, say 12V you'll notice that now most of the voltage now drops across the 390 Ohm resistor and around 2V is dropped on the LED. This is because the MOSFET's resistance is almost zero now and it's now operating in the linear region.

Regardless of what the gate material is, the term is important because it tells you some important hings about the nature of the transistor.

A MOSFET, as opposed to some other types of FET which may have some but not all of these attributes.

As for whether silicon, whose oxide is often used as a gate material for MOSFETs, is a metal - the pedants may if it makes life easier call the devices

Silicon has properties of metals, non metals and semiconductors. It is commonly referred to as a metalloid, although even that is not consistent. The semiconductor industry has no doubt - which is strange as they should care more than most. They commonly call it "silicon metal".

Sample of Silicon metal sellers - doesn't make them right. And

Light relief - something made of "real" metal

FWIW, here are images of silicon from some of the 890,000 or so web pages that use the term "silicon metal". That doesn't make them correct, but shows how common the term is.

Many more "silicon metal" images here - each image hotlinks to a related web page.There are about 70,000 webpages (says Google) that have the term Silicon Metal associated with an image.

26
Mosfet usage and P- vs N-channel
7
FET vs bipolar junction transistor
1
MOSFET resistance
0
Question about Shockley's equation for JFETs
2
Is it possible to make current flow through a transistor from the emitter to the collector without supplying voltage to the base?
1
Will this receiver work?
0
Question about N-channel MOSFET turn on Voltage
0
Confusion about MOSFET
0
What happens when base voltage is higher than the collector voltage in a bipolar NPN transistor?