Why is this LC filter where it is, and what function does it perform?

My customer has a motor controller that apparently only works with an LC filter in front of it. This configuration trips out on undervoltage:

(I'm leaving out details like a line impedance and precharge, but that's the general idea. I can add them back if anyone thinks they're relevant.)

I've never seen a motor controller require an LC filter like that. It is of interest to me that this filter has a pole at 49 Hz, and this equipment is designed to operate at both 50 and 60 Hz. Tests are being run at 60 Hz. If I've computed the frequency response right, that LC should have a gain magnitude of roughly 2x at 60 Hz.

Is this thing really just a tuned voltage doubler? What other function could this possibly perform?

Speculation based on experience! You could probably simulate it easily.

The reason to create an L-C Filter with regards to an inverter is for power quality reasons on the AC side.

A 6 pulse rectifier, in theory, will draw current harmonics: fund, 5,7, 11,13 .... This is however dependent on continuous DC current. Depending on the output power draw and the size of the DClink capacitor, the operating power point that continuous DC current occurs (and thus harmonic content of the AC current) may be too high with regards to requirements.

This inductor lowers the power at which continuous DC current occurs

I think I get it now. The gain of the LC shouldn't be computed at 60 Hz. The signal the LC is seeing is the rectified three-phase, which I shall henceforth call the humpty-hump wave. 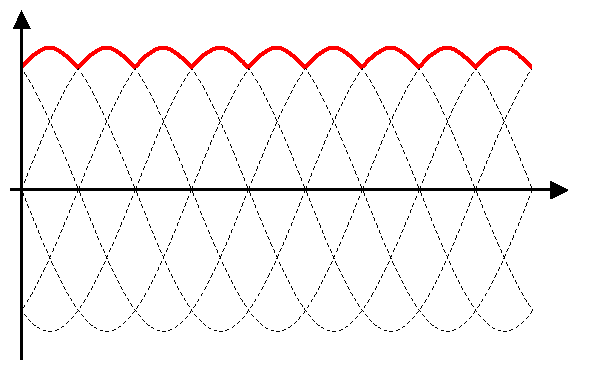 Adding a resistive load reduces the AC gain further, and reduces the phase angle, but the effects are relatively small at the loads of interest. I've run simulations that match up with the math quite well.

The principle for using the LC is the same as the one when it is used at the output of the switching regulators or buck regulators.

You have noisy current riding on the output voltage that has a frequency. This is filtered using the inductor. The capacitor filters out voltage ripples with the capacitor acting as a small battery that kicks in during ripples in voltage or DC rails.

There are many hidden parameters like dcr,frequency ...etc of the inductor and the ESR of the capacitor that basically governs the selection of these specific component.

Not the answer you're looking for? Browse other questions tagged filter inductor tank voltage-doubler or ask your own question.

14
if a standard three-phase 400V AC connection is rectified what DC voltage comes out of it?