How can I make a Fuse Blown Indication LED circuit with variable voltage input?

I'm creating a power supply with an input fuse and and output fuse, and I'd like to have blown fuse indicators. However, the circuits I have found typically have set voltages and thus set resistors, which would give me varying levels of brightness, or not work at all. I'm using chassis mount fuse holders.

Input Fuse: 12V to 24V variable, but I'd like the same brightness regardless of voltage. If there's such a thing as a constant-current LED driver that's not very complex, this could work - there will always be 12V-24V on this when I'd expect the LED to be lit if the fuse was blown.

Output Fuse: 0V to 20V variable, and I'd like the LED to indicate blown even if the output voltage is 0V, but wouldn't want this voltage or current affecting the load (or requiring that there be any).

I do have a microcontroller on the board, and I could thus drive the LEDs with the digital output pins, but would prefer a solution that does not use it. Is such a circuit possible?

Essentially, I'd like to power the LEDs with a set voltage (I have 5V and 12V rails), irrespective of the voltage on the fuses themselves. 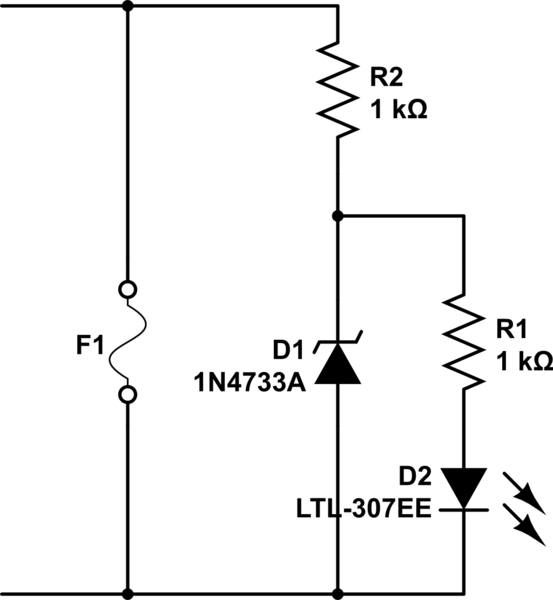 For the input fuse, how do you feel about a couple more components? R2 and D1 form a cheap 5.1V regulator for the LED to assure a more constant brightness. 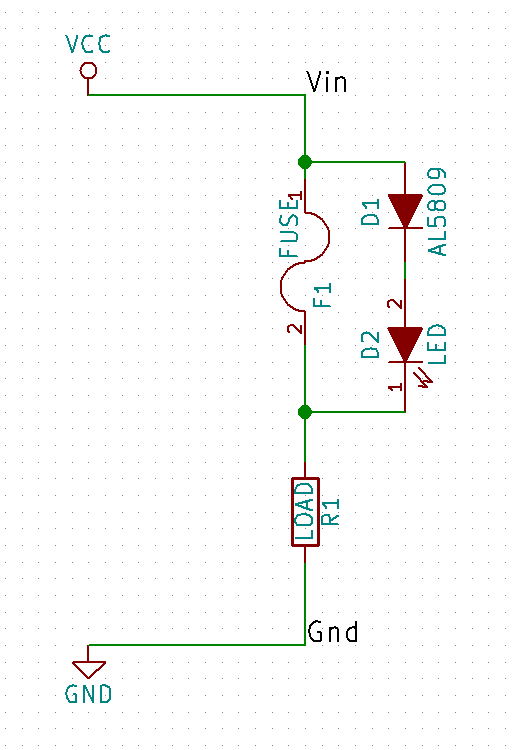 This would be directly applicable to the input fuse, though the following components may try to operate at the reduced 20mA output of the AL5809 even with a blown fuse, which is not ideal.

This circuit could also work with the output fuse, but only when the output voltage is above 2V and with a load attached; under 2V or with no load (and no dummy load added just to meet this condition), the LED may fail to indicate a blown fuse.

Not the answer you're looking for? Browse other questions tagged led fuses constant-current circuit-design or ask your own question.

0
Turning on a LED with negative voltage
0
How to detect if a high voltage fuse is blown
0
PCB design for automotive fusebox?
5
Zener Diode + fuse overvoltage protection for LEDs with constant current driver- fast or slow blow fuse?
0
What is the point of two fuses in series?
0
Remotely monitor condition of fuse
1
How can I make a 16x16 led pannel without losing the brightness intensity of each single led?
0
Fusing an In-Wall LED Application
4
LED resistor calculation with variable voltage
0
Circuit protection with different voltage inputs via switch