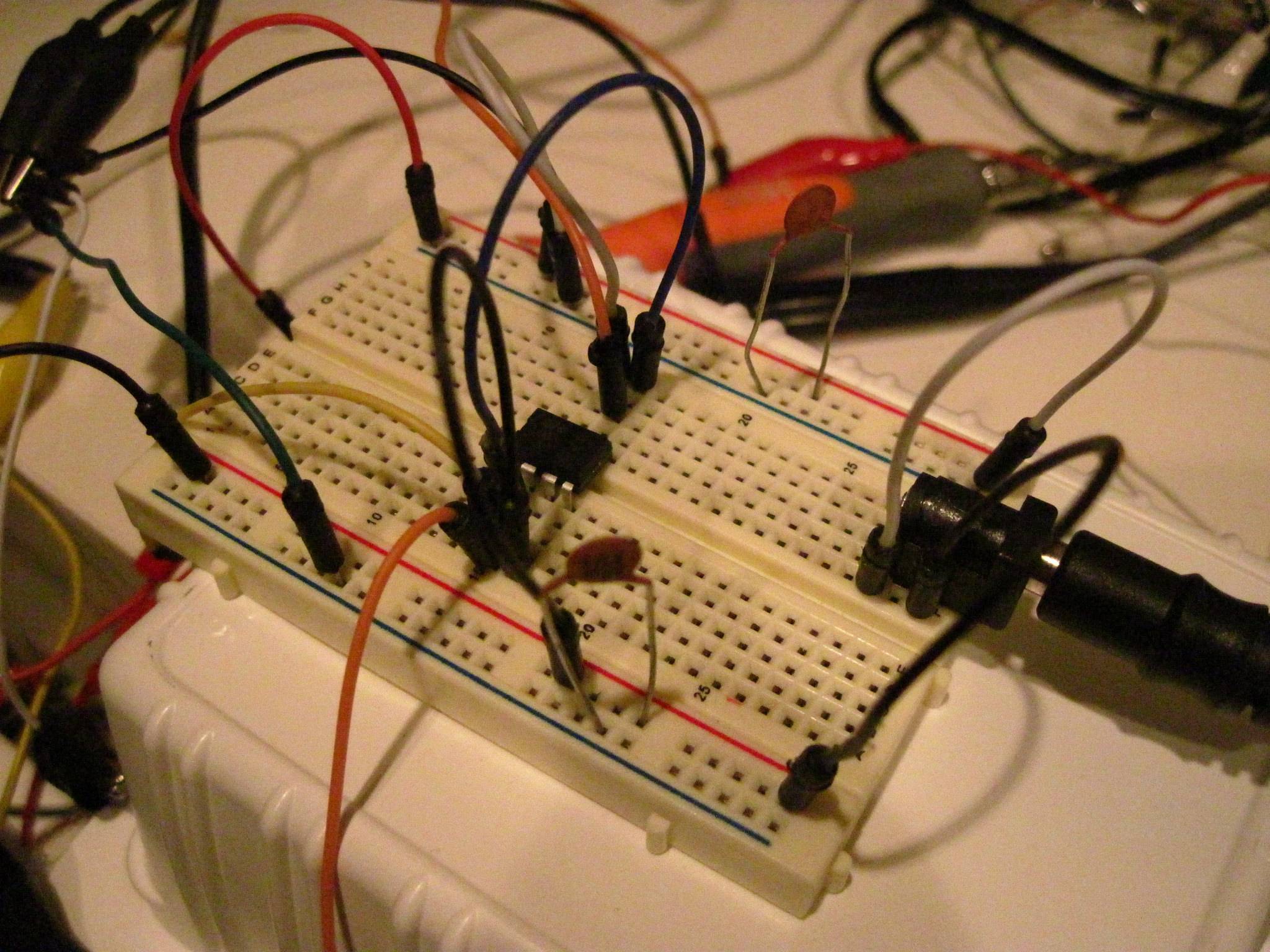 Everything seems to be going well- except for that the output sine wave has a drop-off on the lower part of the signal, which will start if you leave the circuit alone for a couple seconds. Here's a gif I made of the problem (YouTube here):

This seems to me like there is a problem with the values of the bypass capacitors (currently 104 or 0.01 uF). I know from playing around with the circuit earlier that two 0.0001 uF bypass capacitors just don't "fill" the sine waves out all of the way.

Is something wired wrong? (I connected all of the earth grounds together... is that good?) Is 0.1 uF just not large enough for the bypass caps? Or should I add a resistor somewhere? If so, why?

Here is my shot at a working circuit. Is this what is recommended?

Andy's comment is correct. It answers the question and explains what you are seeing, assuming you have swapped the + and - opamp inputs in your schematic : as drawn it has positive feedback instead of negative feedback!.

You are feeding the opamp with 12V, but there is no connection between that 12V supply and the 0V reference for your audio input, output, and scope probe.

And in fact it's probably all of these at different times. When it is +11V/-1V there isn't enough voltage on the -V supply rail for the opamp to function, and so the -ve peaks of the output are clipped.

If you had measured either of the supply rails as I suggested, you would see quite a large variation on them, probably a 50Hz noisy sinewave, whose peaks correspond to the distortion you see.

So you have to define the relationship between that 12V supply and your 0V. As a quick and crude test, take a pair of identical resistors, 1kilohm will probably do, and connect them between ground and +V, and between ground and -V. And observe with the scope probe that V+ is now about 6V (but probably still with a little noise on it).

As long as you aren't loading the opamp output with more than a couple of miliamps this will work, but in future, it's better to use +6V, 0V, and -6V supplies instead.

This arrangement with two resistors is often used on single supplies, but usually with a voltage regulator or even another opamp to provide a better "ground" than 2 resistors alone. It requires some care to remember that "0V" is not the negative supply rail!

Not the answer you're looking for? Browse other questions tagged operational-amplifier oscilloscope sine function-generator unity-gain or ask your own question.