Power factor correction for LED lighting on a generator

I'm the electrician for a club that builds an illuminated carnival parade float, and historically we've lit our float using around 10,000 x 40w incandesant lamps powered by a 800kVA 3 phase generator.

Times are changing, and you can no longer buy 40w incandesant lamps easily anymore, and the cost of diesel and generator hire is expensive, so I want to look at using LED lamps instead.

Due to cost, it's really only viable for me to buy very cheap LED B22 lamps from China, with a basic built-in power supply with a poor power factor.

Wiring up a purely resistive system was easy, but I'm struggling to understand and research how to do this correctly without causing a high current in the neutral.

To balance the system, I've heard that I need to either add a resistive dummy load to each phase, or use a power factor correction capacitor, but I don't know how to calculate the size/rating of these.

Can anyone point me in the right direction or explain how to do this?

I found a study that showed various brands of LED bulbs rated 3 to 8 watts with power factors ranging from .48 to .79. If you can find 8 watt LED bulbs with .5 power factor that give equivalent light as your 40 watt incandescents, you would need 16 VA per bulb vs 40 for the incandescents. If you distribute the bulbs equally among the phases, you should not have any difficulty with the neutral currents. You should still have some concern about extra heating in the generator due to harmonics. It is difficult to determine how much the generator should be oversized for harmonics. The generator manufacturer may have a recommendation.

A harmonic filter would both reduce the harmonics and increase the power factor. I don't believe that you should purchase a 3-phase choke and harmonic filter separately. You should be able to get the most effective filter if it is purchased as a package.

The total RMS current and power may be marked on the bulb. If it is not marked it can be measured with an inexpensive power meter like a Kill-A-Watt.

Here is a link to the study mentioned above.

A LED itself is resitance load, while the problem is the rectifier and step down circuit. The cheapest LED lamps use a series capacitor that uses its reactance to increase overall impedance, which means that such lamp will have a cap. phase lag not the inductive as motors or lamps with ballasts.

Or the LED lamp can have a small SMPS inside with a transformer, in this situation you will get more a harmonic distortion rather than phase lagging. You should buy one of these first, then see with power meter.

Lastly, LED lamps consume less power than incandescent lamps, so you will have extra current reserve for feeding also the reactive power.
IMO you don't need nothing at all, perhaps a choke or sinusfilter.

We are having the same issues with the harmonics. I calculated total load of 170 kva last year at the start of the year, we had 17,000 lamps on board we pulled 110 kva total on circuit. it wasn't pushing the generator at all as we had a 250kva set.

The only way I managed to improve power factor was by using motors and variable load heater which I ran constantly and I left it on when I started the set every time. I based the 3w led at 0.4 pf. The set readings came out 0.85pf. We found as led are linear loads as well as flourescents, we need non linear loads such as heaters and motors to balance this. But also balancing the phase current as best possible helps. We also used par cans to balance the phases as they only produce resistive loads this way you can protect the generator.

Here is one such bulb: 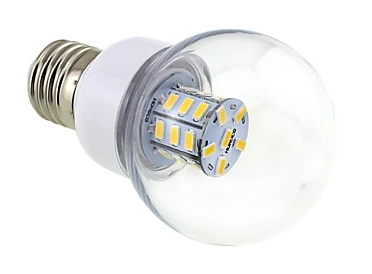 Example product and original source for bulb image above:

Not the answer you're looking for? Browse other questions tagged led generator three-phase power-factor-correction or ask your own question.