In fact, there are hard-coded bits of data on many processors and other such devices, even complete bootloaders.

There are many ways to do that, sometimes it's just an array of hardwired shorts to VCC or GND that are selected in a grid, just like the bit-cells in an EEPROM device.

Or sometimes it's a row driver with diodes and pull down or pull up resistors, or a similar trick, where the row driver decodes the address it's given, much like a 3-to-8 decoder, but larger: 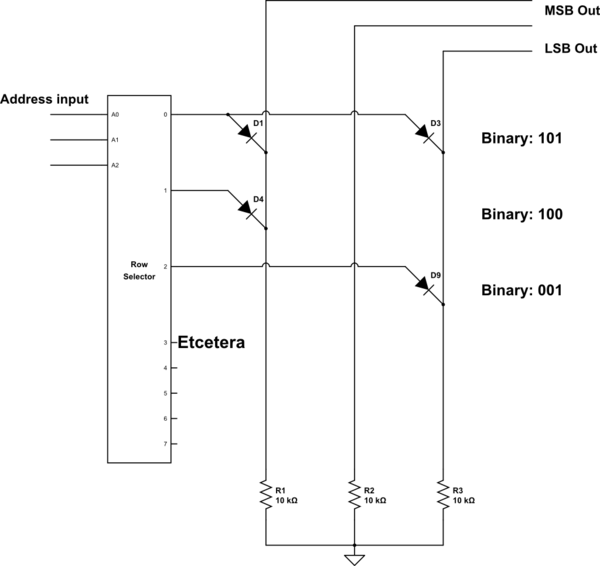 And since I'm not a chip designer, I'm probably overlooking some details here and there, but I'm quite sure there's a lot of ways this similar trick gets done. In some, or even many, cases they may make a grid with all diodes, or links, present and then laser etch away the paces where they want the opposite bit to come out, for example with unique IDs, where every chip gets lasered an increasing number in a fixed spot in the memory, that will not decay over time like Flash or EEPROM (though the latter has become nearly ageless by now).

Executable code is just data, ones and zeros. How to store that ? You need something where you enter the address of the memory location you want to read and at the output the corresponding data appears. Can you make such a thing using standard gates (AND, OR etc.) ? Yes, it is just combinatory logic.

If you would use standard logic gates (AND, OR etc) then this would use a lot more area. You would also need to connect them in certain ways to define if a zero or a one is stored.

Fusing or anti-fusing is probably the simplest way to store bits in silicon. All it takes in a higher current to blow the fuses which then corresponds to a zero or a one. There's various implementations of fusing which are described in more detail here.

Yes you can encode binary data in an arrangement of gates.

eg: a collection of and gates and inverters to decode each address into a individual row line, and then combine the row lines as needed with or gates to get the desired data output.

Not the answer you're looking for? Browse other questions tagged memory logic-gates binary core code-design or ask your own question.

0
How can I design a 4-to-16 decoder using two 3-to-8 decoders and 16 two-input AND gates?
0
Can a secondary or additional core be loaded and made active (powered on) without via user application or a boot loader
0
How do you convert a number to its 4-bit binary equivalent using logic gates?
0
How can I create AND/OR logic gates using comparators?
0
How to find out if a binary number is zero or not using logic gates?