Every man and his dog are controlling DC motors with PWM. Nowadays microprocessors are popular and offer more flexibility than 555 timers and general mixed signal analog electronic. The song remains the same in the sense that the motor gets a square wave that will increase heating of the iron. Most DC brushed motors are thermally limited in the sense that continuous HP is defined by a maximum tolerable temp rise. This is partly why the peak HP and torque can be much much higher. When PWM is applied the motor would surely have to be derated?

Would anybody be able to roughly quantify these extra losses to give motor commissioners a guide of what to expect? What PWM freq would be best from this motor utilisation standpoint? If you placed inductance in series with the motor and capacitance in parallel with the motor these postulated extra motor losses would not happen but this LC filter would cost money and weigh something because it has to be rated at the motor voltages and currents, even if the chosen PWM freq is high and switching losses are dealt with. Are the losses bad enough to make this worthwhile? Are these losses worse when the turn down ratio of the PWM controller is high? Would it be beneficial to run variable frequency PWM?

Would anybody be able to roughly quantify these extra losses to give motor commisioners a guide of what to expect?

You'd have to use a harmonics analyzer or high-resolution scope as suggested in this article to measure the apparent power with PWM. Also from that (2001) article I gather there's no industry standard for measuring efficiency of DC motors driven by PWM...

In general, you can measure losses with the calorimetric method, but that's very cumbersome for motors. I only found specifics for (AC) induction motors, which being larger and more expensive are probably worth the hassle. For those they are worried whether inverter [PWM-]generated sinewaves (which contain a lot of ripple noise) cause significant extra heating, which is similar but not quite the same problem with what you're asking. 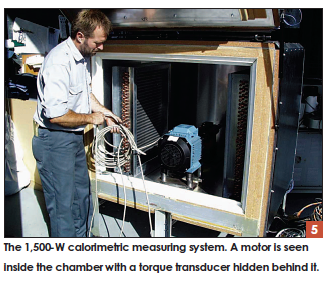 Image from this paper, which also details the issue of having to couple a mechanical load while decoupling it thermally:

Another important difference is that the system is equipped to a load and measure rotating machines. The system is provided with an integral mechanical load. Shafts may be loaded at up to 7.5 kW at speeds in the range 1,500–4,500 rpm, and with a maximum torque of 62.5 Nm below 1,500 rpm. A Siemens controller and a permanent magnet (PM) synchronous machine provide the load. The load is led through the test chamber wall using a combination of a magnetic coupling and a carbon fiber shaft. This minimizes stray heat flow along the shaft, as may be expected if a steel shaft were used. The 1,500-W system is expected to have an accuracy better than 5 W. The developed system is shown in Figure 5.

Are the losses bad enough to make this worthwhile ?

Given the dearth of publications on this (for PWM-driven DC motors)... I would venture a guess the answer is usually "no"... however, I found a few publications dealing with the latter, the most recent one I found being combo paper that [despite its title] also studied efficiency of DC motors in a section, which I'm quoting here, and it's indeed (like @JonRB said) mostly and issue of eddy-current losses:

PWM supply is widely used in the speed control of dc motors. The pulsation components in the PWM supply will also induce additional losses. The losses induced by PWM supply include copper loss, hysteresis loss, and eddy-current loss. Among them, eddy-current loss is the dominating loss mechanism according to theoretical research and experiments carried out in the past. [...] In this paper, based on the Fourier series analysis of the PWM waveform, the eddy-current loss is calculated under linear material assumption. 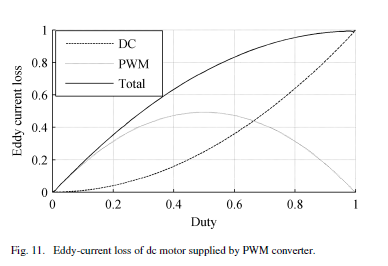 So yes, theory predicts that the losses in the motor are greater with PWM than if you supplied it with DC (of the average value of the PWM). (In those calculations they assume that PWM source voltage drops to 0 during the off period, but since the windings are indeed inductors they provide their own averaging affect).

And the paper also has some experimental data to back that up (however this part is somewhat confusing to me, see my comments after the following quote):

The experiment on a dc motor is also under no-load condition. The dc motor is rated at 125V, 2 kW. The dc motor is tested with pure dc power supply, as well as a full bridge dc–dc converter. The difference between the input power of the dc motor under PWM supply and under pure dc power supply is considered as the loss induced by PWM converter. Fig. 14 shows the loss variation with duty cycle at constant dc bus voltage of 100 V. The calculated and measured iron losses are consistent and in both measurement and calculations, the eddy-current losses reach the maximum value at 0.5 duty ratio.

In order to study the effect of duty ratio on PWM loss under the same rotation speed, the output dc voltage of PWM converter is kept constant and the dc bus voltage is adjusted according to the duty ratio. Fig. 15 shows the relationship of PWM loss versus duty ratio at constant speed of 396 rpm. It can be seen that from both measured and calculated losses, the extra PWM iron losses decrease with the increase of duty ratio. Therefore, in order to minimize eddy-current loss in dc machines, it is beneficial to maintain a large duty ratio by varying the dc link voltage to achieve the desired speed.

The discrepancy shown in Fig. 15 is believed to be attributed by the exclusion of effects of PWM supply on hysteresis loss and copper loss in the calculations, which are included in the measurements.

It's not really clear to me if this "full bridge dc–dc converter" they used has its own output filter or not. Anyway those extra 15W losses on a 2kW motor is however under 1% (ok at 1/4 power so half duty it would be 3%)... so I suspect that's why you probably don't hear much about it. But it's not clear to me if that is with a pure PWM drive or if their DC-DC converter has its own filter, in which case the ripple sent to the motor would be a lot less... so the losses would perhaps be more significant without it. (Normally a full bridge dc–dc converter would have an LC output filter, but perhaps for the purpose of their experiment it doesn't have that so that it's the same signal shape [i.e. dropping to 0 when off] as in their theory section? I couldn't figure from the rest of the paper what this dc-dc converter was exactly.)

Actually one reason I couldn't find more materials is terminology. A lot of the motor people refer to PWM drive as "chopper controlled" instead. With that in mind, more can be found:

What PWM freq would be best from this motor utilisation standpoint?

As high frequency as possible it seems. That was among their conclusions & recommendations. However, back in the day they could only test up to 400Hz... so presumably more can be said; alas the much more recent paper (quoted previously) that used a dc-dc converter didn't mention its frequency. 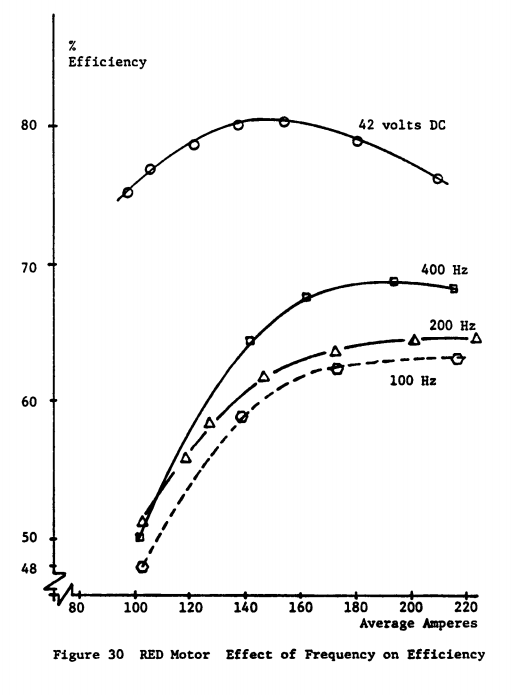 This info on frequency choice is repeated in a 2004 book that explains it by "reduced harmonic content of the current at higher frequencies"", and which cites precisely that 1982 DOE/NASA report in support. Apparently no more recent research had been done. I'm hoping that with the trendy electric vehicles research nowadays, more would exist on this, but insofar I wasn't able to locate much more.

Not the answer you're looking for? Browse other questions tagged pwm dc-motor efficiency switching-losses or ask your own question.