I need to obtain 5V stable week power supply from a 230VAC power line. I need this as cheap and as small as possible. Fortunately I don't need galvanic isolation and required current is as low as 1-2 mA.

There are no available linear regulators which I could connect directly to rectified mains (the most voltage resistant ICs has up to 450 volts when I need at least 616 volts: 400 * 1,41 + 10% - the device should survive phase to phase connection).

Now I came to this solution: 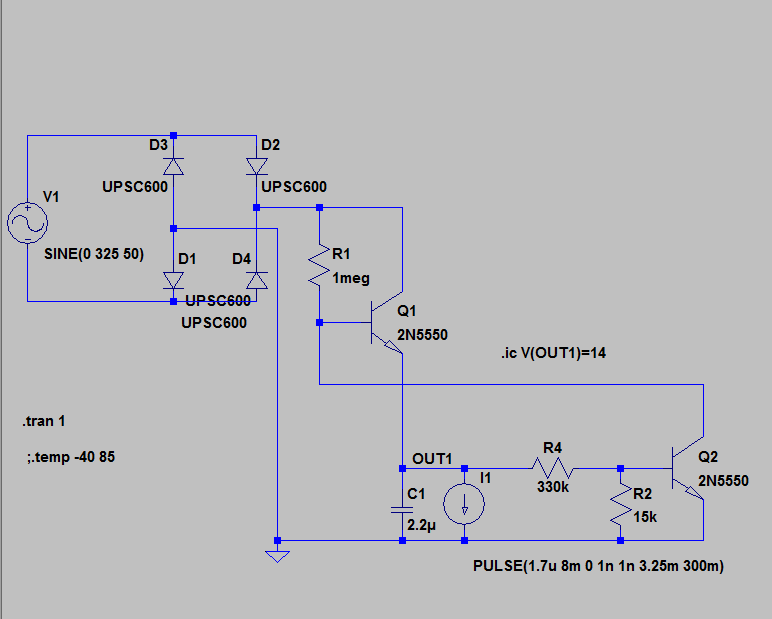 This schematic works very will.

However I will need conventional linear regulator anyway to provide stable Vcc (output of the schematic above is depends on consumed current and has 100Hz ripples).

If I'd able to put an external switch to regulator I could find the switch with necessary voltage strength and I'd get needed stability.

Is there any solution?

The most basic approach to this problem doesn't use a bridge rectifer at all but relies on a zener diode current limited by a dropper capacitor: -

The voltage across the zener can be regarded as a square wave with a positive peak at Vz and a negative peak at -0.6V. Using a conventional diode and smoothing capacitor after the zener can give a fairly smooth DC voltage of Vz - 0.7 volts: -

Smoothness is subjective of course and ultimately it depends on the smoothing capacitor value and how much current is taken by the load. You could use a 7.5 volt zener and, on the smoothed output, use an LDO regulator to give a pretty good 5V (if you really need a low ripple supply). I've used the above (without a regulator) to power a microphone, a bit of logic and a triac - it was a sound activated light built into a wall light switch. Ripple wasn't a big deal AND space was limited of course. I used a 5V6 zener as shown.

The resistor in series with the capacitor is there to prevent big surge currents should the circuit be connected to the AC at the peak of the sinewave.

This "full-wave method appears to get used quite often: - 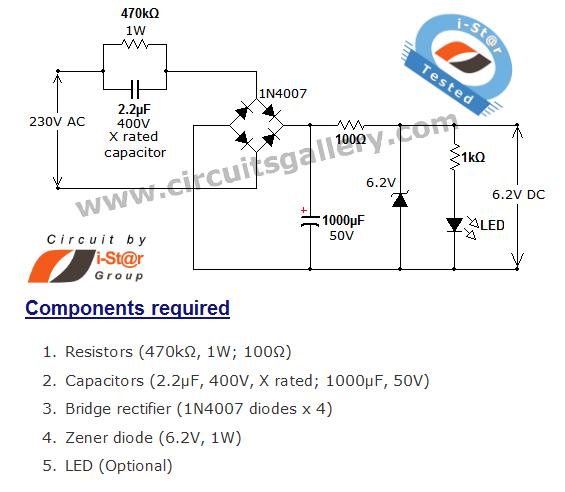 The main idea is the same as the "bridgeless version in that the 2.2uF "drops" the AC voltage without dissipating heat. A zener diode than clamps that voltage. In this design it clamps at 6.2 volts.

It might be worth simulating it to see if the 1000 uF can be reduced in size. I would also consider putting the 100 ohm resistor on the AC side of the bridge and maybe even try this one: -

There are quite a few on-line HERE. BTW, the main problem with your design is that the 2N5550 is only rated at 140V max and it inefficiently drops all the voltage and even at 2mA collector current the average voltage across the transistor might be 200 volts and this means 0.4 watts of heat. Capacitor droppers don't have this problem.

Hard to get simpler than this:

Just for grins, if you want to play around with the circuit. here's it is using an LTspice shunt regulator and LTspice library parts followed by the circuit list.

Not the answer you're looking for? Browse other questions tagged power-supply low-power mains linear-regulator or ask your own question.